PDC Challenge Tour player and winner of One Hundred And Eighty quiz show Diogo Portela has some new darts!

We had another momentous day in the history of the Darts Performance Centre on Thursday 20 October 2016! We have sponsored the kit of London County and PDC Challenge Tour player Diogo Portela for a couple of seasons now. We have now produced his signature darts!

Diogo came to London from his home country of Brazil to pursue his dream of becoming a professional dart player. We first met him when he turned up for the 2014 New Forest Masters. He is a great dart player but also has a number of other qualities that we look for before getting involved in any sort of sponsorship with a player. 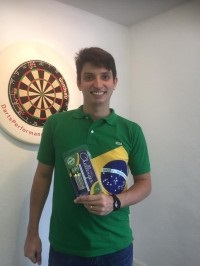 Diogo has also made good use of our video coaching service and is a fantastic example to put out to the darts world of the advantage of the service we have pioneered. When we first studied Diogo's throw he was twisting his hand around as he drew back to throw, this was causing him problems.
Once we diagnosed the issue Diogo went away and worked hard on putting it right. He then hopped on the train again a few months later and came back to see if his hard work had paid off.
Sure enough the twist had gone completely. He admitted that he had been playing the best darts of his life so was sure that he had resolved the issue he had. So there you are, a real life example of how we can help dart players using the skills and knowledge we have.

We then started chatting about getting a set of darts made and Diogo came down to DPC HQ to try to design his perfect darts! One of the great things about having a darts shop on site is we could look and feel all the different grip patterns and come up with a mixture that works for a particular player.

This is how the Challenger Darts were created. They have a subtle grip with rings for exact finger placement and a tapered bullnose end for tight grouping. The three coloured rings of green, yellow and blue are a nod to Diogo's home country of Brazil. The darts are finished off with Brazil flights and a set of yellow and clear faded stems. 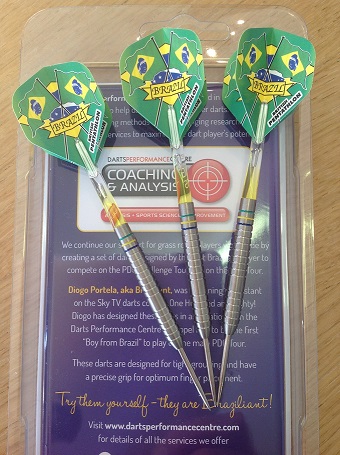 Diogo came to DPC HQ with his brother, Ze' Mario and his wife Christiane, his Father Mario who is over here on holiday and an old friend from Brazil, Peter, who is now living in Hampshire. Peter came along for a reunion and to celebrate the launch of Diogo's darts. It was a brilliant afternoon, we did some video coaching and a video of Diogo talking about his new darts. It's days like this that make us realise why we are involved with darts.

So that's the story. We are hoping that the new darts propel Diogo to where he wants to get to in the darts world. Please support him in his quest to be the first Brazilian on the PDC tour by getting a set of his darts - you really should give them a try, they're braziliant!