Last time we published our thoughts before the World Cup had started-We reflect on that to see what we got right and wrong!

Last month we went over the preparation that Team Brazil undertook prior to the World Cup and dished out some advice on how to play as a team. We have the chance to reflect on that especially with my privileged position of being with Team Brazil during the World Cup.

I still think that a lot of people are sceptical about the importance of team spirit in a darts pair's team! Maybe as darts is usually a solo game? However, you can't look at Team Scotland and really argue that two brilliant individual players can always make a brilliant team.
I first smelt a rat when Peter Wright turned up at the PDC hotel where virtually everyone was staying but Gary Anderson was nowhere to be seen. He prefers his preparation away from where the main throng of players are staying. I totally respect that and Anderson must do what he needs to do to hit his optimum performance - but this is pairs and perhaps the whole Team Scotland thing was not managed particularly well! 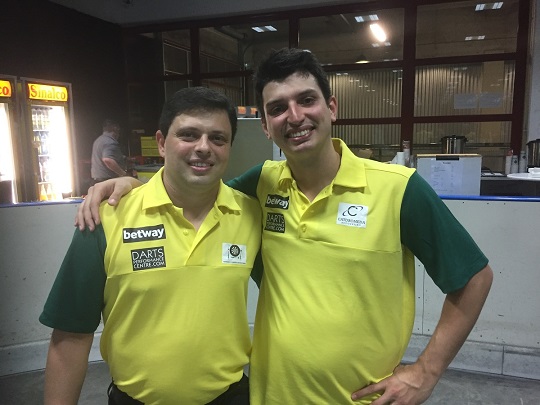 On the other hand, yes I am biased, but I thought Team Brazil played like a team. At 4 legs all you may have noticed Diogo Portela going to his partner after he had suffered a bounce out after Team Switzerland had kicked off with 140! He told me afterwards that he had told Alex, "don't worry, they will miss, we will have a chance to win".

Of course we will never know what the outcome would have been if Diogo had wallowed in his disappointment at his bounce out and belief (for a second) that the game was drifting away! Alex (who had had the pressure taken off him by Diogo's encouragement) popped in a 140 and then Team Switzerland did the next best thing to a "miss" and scored just 7! Brazil were back in control and the rest is history! Relaying the inner workings of Team Brazil's experience at the World Cup is to try and apply what we learned to your pair's games. On the Thursday night for example we had two great examples on how different players prepare for a big game. Our game was Friday and Diogo was happy to spend some time with his Dad, Mario, and watch some of the games in the arena.

Alex on the other hand was keen to have some practice time on stage but was keen to get back to the hotel to carry on practising. Whether this was some anxiety creeping in or what but it is irrelevant in many ways-he wanted to prepare with some evening practice so fine; we are all different and both players respected each other's plans.
I went back with Alex to the hotel and we had a really good practice session, I was shouting out some finishes and we were having some laughs too - we had a nice meal in the hotel and he seemed relaxed again and ready for the big game!

Strategy wise we did give switching our playing order around a lot of thought! We were accused of "over thinking" it and with hindsight maybe that is true. We were confident Diogo could beat Schindler although to be fair to Diogo, he is not short on confidence and was more than happy to take on Max Hopp!
After much umming and aahing we switched and so did they-we were double bluffed! Another good lesson for all dart players-keeping it simple is more often than not a wise policy.