The JDC Tour developed over the last few years from Steve Brown's Junior Darts Academies. Brown managed to get the support of the PDC and to secure Winmau and Modus ambitious sponsors. So the JDC was able to organise beside the first JDC Tour 2016 an European Championship for which players from several European countries could qualifiy by qualifiers.Thanks to the cooberation with the PDC from time to time PDC Top players visit acamdemie practice evenings or JDC tournaments and practice with the young players helping them with advice.

The inaugural JDC Tour for players under 16 2016 concluded with the final in Alexandra Palace during the PDC World Cahmpionship. Englishman Jim Moston and Dutchman Maikel Verberk met in the final. Winner was Maikel Verberk. As well in December 2016 a JDC Qualifiying School took place in which three Tour Cards for the PDC Development Tour were on offer. The three Tour Cards for 2017 went to Adam Paxton, Alex Gurr and John Brown - they can take part in Development Tour for free . In 2018 again three young players will be supported like this - this time the top three of the JDC Rankings after the end of the season.

2017 again a JDC Tour with six events in different English towns will be played. The European Championship will take place again as well - this time with seperate tournaments for boys and girls and with an added pairs event. 2017 for the first time a WDS Associates World Junior Darts Championship will take place. All JDC Tour Events winners and the five top ranked players of the tour rankings will qualify for the World Championships as will be the five best academy players from the Order of Merit. How players not from the UK qill qualify is not yet known. 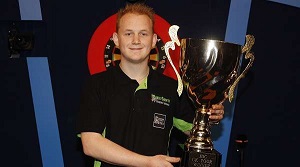 The early rounds of the inaugural WDS Associates World Junior Darts Championship will be played on 2. December. The final will take place during the PDC World Championship 2018 in the Alexandra Palace in London.