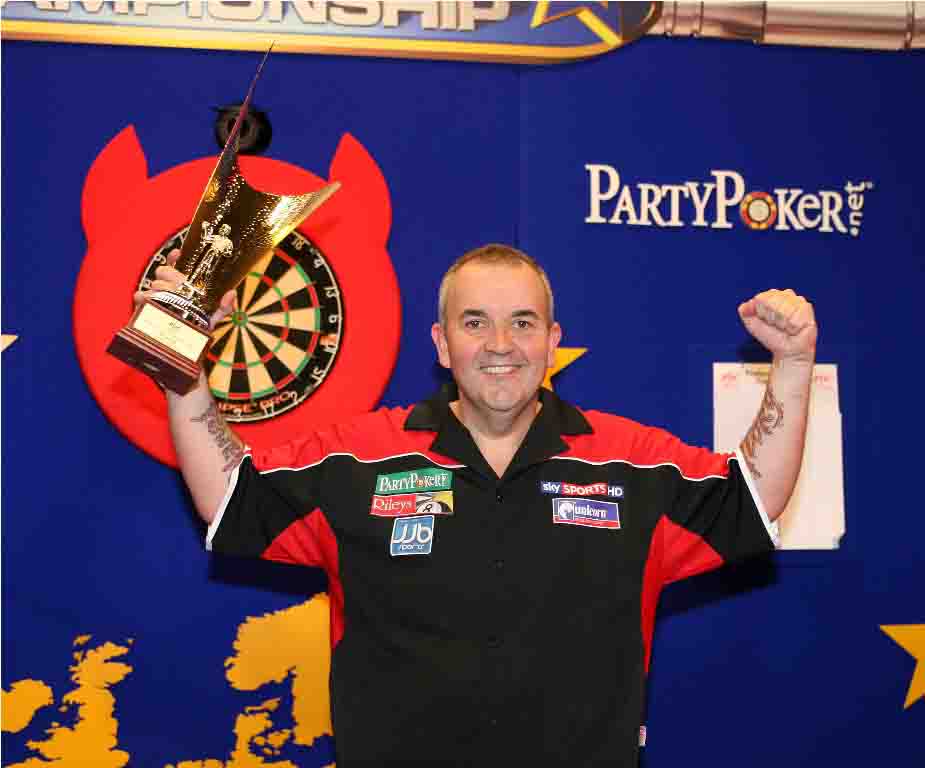 Tonight in Mülheim the fifth European Championship will begin. All four previous tournaments - three were played in Germany, one in Holland - were won by Phil Taylor only his opponents in the finals changed. Twice it was Adrian Lewis.

To be sure this year Taylor once again is the favorit. As Adrian Lewis he didn't take part in the two Players Championships last weekend in Barnsley and he withdrew from the German Darts Masters in Sindelfingen two weeks ago. Those were won by Adrian Lewis. The last public appearance of Taylor in a tournament was the World Matchplay in August which Taylor won. So his form is some kind of a riddle but nevertheless he should win the first round match against Swedish player Magnus Caris even though Caris comes into the tournament with a win on the new Scandinavian Tour. I would suppose Taylor to win his second round match against either Jerry Hendriks of Mensur Suljovic as well, Taylor's problems might probably only start in the final where he'll meet one of the strong players from the other half of the draw for example Michael van Gerwen. Van Gerwen is in great form at the moment - he was one of the winners last weekend in Barnsley - and it probably will be hard work to overcome him for every player. Beside him all the usual might be favorits can be found in his half of the draw, Terry Jenkins, James Wade, Simon Whitlock, Raymond van Barneveld and Adrian Lewis - some of them in really good form though one never knows which Lewis or which Wade might turn up. Jenkins and van Barneveld will meet first round so one of them will be out of the tournament after this.

All three German players - Andree Welge, Tomas Seyler and Michael Rosenauer will play on the first evening as will Mensur Suljovic. Welgee defeated his first round opponent Mark Webster recently during the German Darts Masters - I am not sure he'll manage it a second time. I think it doesn't look good for Tomas Seyler against Wes Newton who might not be brilliant at the moment but certainly plays on a hight level. Michael Rosenauer will meet Ronnie Baxter who was defeated first round during the German Darts Masters by Arron Monk - hard for the German player but a might be upset. Mensur Suljovic meets young Dutchman Jerry Hendriks quite a good young player and without inhibition though perhaps he'll feel a little bit impressed by the big stage of a Major tournament.

Gary Anderson is banned for this tournament as he is for the next European event in Nuland but we'll see him soon in the Championship League Darts and the World Matchplay. Might be the ban helped his form?

The tournament will be televised by ESPN and streamed live as usually by pdc.tv or- when you subscribe- by ESPN. Ray Stubbs will lead the team of commentators to which between others John Part the three times World Champion will belong who didn't manage to qualify for the tournament.