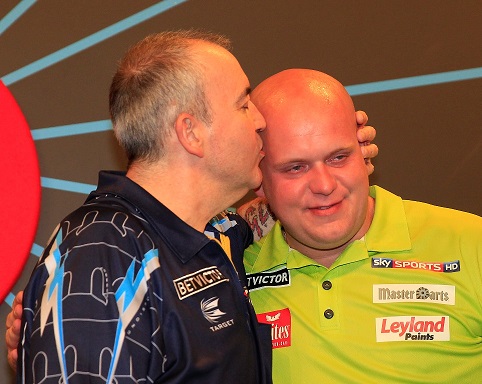 Phil Taylor won an incredible 15th BetVictor World Matchplay title as he extended his winning run in Blackpool to an amazing seven straight years with a sensational 18-9 win over Michael van Gerwen at the Winter Gardens on Sunday night.

Taylor's domination of the tournament - having won 15 titles in 21 events since the World Matchplay was introduced in 1994 - continued as he claimed the 100,000 pound first prize and retained the trophy in style.
World Champion van Gerwen had won through to his first World Matchplay final as he set out to claim another major title, but was stopped in his tracks by an imperious Taylor display.
Taylor powered into a 7-1 lead with six successive legs in a storming start and took out 121 on the bull as he surged into an 11-2 advantage. Van Gerwen rallied to pull back to 14-8, but Taylor pounced on a missed double seven for a 122 finish in the next before pulling away to retain the title with an average of 107.27.

"I think this is the best ever win here, and I'm so happy," said Taylor. "I am absolutely over the moon and you could see from Michael's expression at the end just how much it meant to both of us. It was a tough game and I had to get on top of Michael early on. I knew I'd play well tonight and I wanted to knock his confidence and keep him thinking. He's a confident player, and he's tremendous. He's world number one for a reason and he's been inspiring me to get back to my best, and I want to get my number one ranking back. He was in tears on stage but he shouldn't be because he's played some superb darts this week, but it shows the passion he's got."

Taylor's 13-dart leg to open the game was cancelled out by a 14-darter from van Gerwen in the second, as the reigning champion missed the bull for an early break. Taylor, though, would break three times in a six-leg run as he pulled clear of a shell-shocked van Gerwen, following up three successive 14-dart legs with checkouts of 78, 74 and 88 as he twice punished his opponent's missed doubles at tops. Van Gerwen hit back in leg nine - hitting double 16 after Taylor wired the bull for a 161 finish - before the Stoke great replied with an 11-darter and a 121 finish to lead 9-2. Taylor also took the next two legs to move 11-2 up, with van Gerwen taking out 82, 127 on the bull and double 18 to cut the deficit to 11-5. Taylor hit back with a 124 checkout, but van Gerwen's revival continued as he defied maximum scores from his opponent to win two of the next three to stay in the hunt at 13-7. A pair of double eight finishes from Taylor sandwiched an 11-darter from van Gerwen, before a 76 finish moved Taylor 16-8 up, a 109 checkout edged him to the brink of victory and double top sealed another Blackpool triumph. 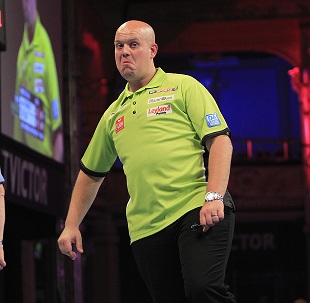 Van Gerwen - who will be married to partner Daphne in the Netherlands next weekend - was left in tears following the game, as he fell just short of claiming his first World Matchplay title.
"I've never been in this final and I wanted this trophy so badly," said the Dutchman. "I was here to win the tournament, but Phil was fantastic and he showed his class tonight. He was the better player in this tournament. I didn't perform as well as I could and I wasn't good enough. I tried so hard and I don't know what happened tonight "I'll move on from here because you learn from games like this. I've hurt Phil in the past and seen him disappointed, and we'll have a lot more battles - I'll be back in the next tournament!"

Taylor had been whitewashed 7-0 by van Gerwen almost six months ago on the opening night of the Premier League Darts season, and has spent much of the time since tinkering with the design of his new darts in search of the form he has found in Blackpool.
The victory, which included his amazing nine-dart finish against Michael Smith in the second round, confirmed Taylor's resurgence as he added: "I'm buzzing and enjoying every minute of this, because the last six or seven months has been the worst time of my career. I've really tried hard and the last six months have been an absolute nightmare for me. I've been trying my socks off and I've got to thank my sponsors at Target for backing me and helping with everything I've changed with my darts. They've got so much patience and have done everything I've asked of them." 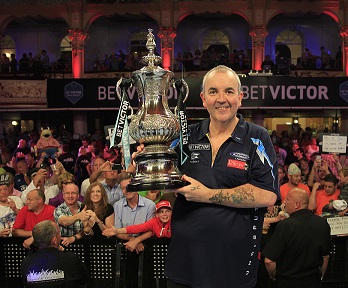