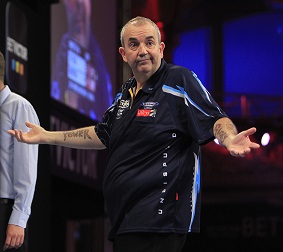 PHIL TAYLOR and Gary Anderson set up a mouthwatering clash at the BetVictor World Matchplay with superb quarter-final victories over Wes Newton and Adrian Lewis on Friday night in Blackpool.

Taylor continued his bid to claim a seventh successive Winter Gardens triumph in style as he ended the hopes of Fleetwood ace Newton with a 16-6 win in their last eight contest.He was joined in moving through to Saturday's semi-finals by Scottish star Anderson, who overcame UK Open champion Adrian Lewis - the number three seed - 16-8 as he set up a tasty contest with the reigning champion. With Michael van Gerwen and Simon Whitlock set to meet in the other semi-final, Taylor insisted that darts fans are in for a treat on Saturday night in Blackpool - despite his own early scare in the quarter-finals.
Newton came from 2-0 down to lead 4-2 against the 14-time World Matchplay champion, but Taylor responded in style to take command with a run of seven successive legs, which included a 160 checkout. Newton cut the gap to 12-6 at one stage with a 149 finish of his own, but Taylor finished 148 - with his opponent waiting on 32 - as he moved eight legs clear before he took the next two to secure victory.

"I'm really pleased to be in the semis," said Taylor. "Wes has really dug in this week to get to the quarter-finals and he was up for it but I wanted to put him under pressure.He got ahead of me at the start and I was awful early on but I got into the game. I didn't click and was 3-2 down before I knew where I was, but the 160 was a massive shot. My performance was okay but it won't be good enough to beat Gary on Saturday and I'm excited about playing him. He's played well all week and knocked out some great players. It will be a cracking semi-final and both games will be fantastic. Darts fans are in for a treat." 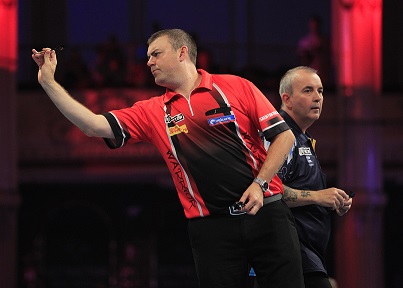 Newton had battled back from behind to defeat Ronnie Baxter and Paul Nicholson to reach the quarter-finals for a second time in Blackpool, but found Taylor too great an obstacle to overcome.

"I had a pretty good start but from then on I wasn't in the game." admitted Newton. "Phil's an awesome player, the best player that's ever lived in my eyes, and he does special things at the right times. I got through to the quarter-finals and I know I'm not playing as well as I can. I've been fighting and battling and trying to get as far as I can, but it's not good enough. We all go through this at certain times, and it's how you come out of it that matters. I'll keep practising and putting the hard work in, but it's wins that will turn it around and I'll keep fighting." 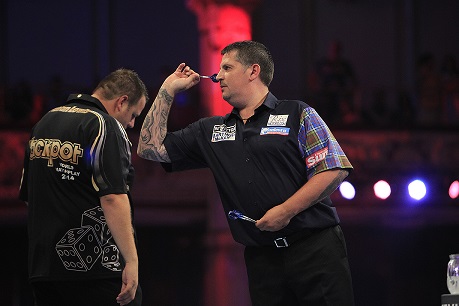 Former Premier League Darts champion Anderson, meanwhile, reached the semi-finals in Blackpool for the first time with a commanding 16-8 defeat of Adrian Lewis.
Anderson set the tone for the game by taking a 3-0 lead, and though Lewis finished 104 to get off the mark the 2013 finalist was never able to draw level. The Scot moved from 3-2 to lead 6-2 and also led 9-3 and 10-4, as Lewis' 107 finish was bettered with a 110 checkout from Anderson, who added a 104 checkout in moving 12-6 up. Lewis repied with a 102 checkout as he pulled back to 13-8, but Anderson's second 104 finish of the game in the next proved a killer blow before he took his tally of 180s in the match to seven with one apiece in the next two as he sealed victory in style.

"Adrian wasn't at his best and he didn't hit as many 180s as he normally would, but I did a good job," said Anderson. "I felt like Adrian was struggling and I was struggling, and I thought it was scrappy, but the finishes were okay. The last few legs were great and I didn't realise it was a 100 average - but I know I can do better. It's great to be in the semis but I want to keep this going now. I said in December that I was going to give it a good push this year, and I'm plodding along, just keeping quiet, and I'll let the big boys worry about their darts and slip in the back door." 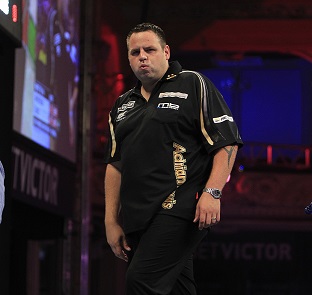 Lewis had averaged 110 in his first round whitewash of Andrew Gilding and also saw off Mervyn King in round two, but admitted: "I put a lot of darts on the wire and couldn't find my range with the scoring tonight. Fair play to Gary because he finished really well but it wasn't to be for me. I felt really confident but it just didn't happen for me and it was one of those nights, but I'll take it on the chin and move on."