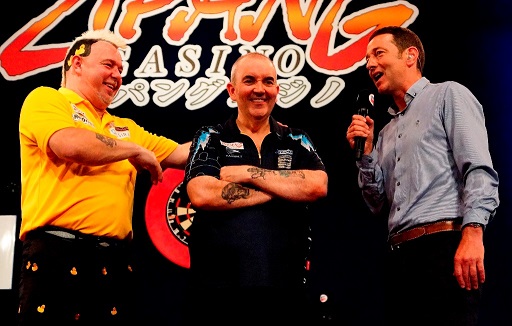 PHIL TAYLOR produced a scintillating night of darts to claim glory in the inaugural Zipang Casino Japan Darts Masters as he defeated plucky Peter Wright 8-7 in a thrilling final in Yokohama on Sunday.
Taylor followed up Saturday's win over Masumi Chino with victories over Raymond van Barneveld, Gary Anderson and Wright to pick up his fourth PDC World Series of Darts title. However, Taylor was pushed all the way at the Osanbashi Hall in Yokohama as the PDC's inaugural televised event in Japan produced a sensational second night of action.

The quarter-finals had initially seen Michael van Gerwen defy a ten-dart finish from Stephen Bunting to average 106.34 in a superb 8-5 victory, before Wright averaged 103 and hit two 121 checkouts in seeing off Adrian Lewis.
Taylor then saw off great rival Raymond van Barneveld 8-3 - aided by taking the game's opening five legs without reply - before Anderson was at his clinical best to overcome James Wade 8-1.

The semi-finals proved dramatic as Wright firstly edged out van Gerwen 8-7 in a classic to win through to his second World Series of Darts final. The Scot leg 3-0 before van Gerwen hit back to move 6-4 up - but Wright drew back level and took the game into a decider before finishing a spectacular 141 checkout to emotionally snatch victory.
The second semi-final proved equally dramatic, with World Champion Anderson leading 3-1 against Taylor before the Stoke legend hit back to move 4-3 and 6-5 up in a see-saw contest, taking out a party-piece 125 checkout which included two bullseyes before the Scot took out 140 with two double tops. As the game headed into a decider, Taylor landed a crucial 180 before finishing double seven for a 13-darter to move into the final.

Taylor continued that momentum as he took a two-leg lead over Wright, who hit back to level at two-all with the aid of a brace of 180s in an 11-darter. Taylor, though, took the next five legs in ruthless fashion, including a 120 checkout, as he moved to the brink of the title at 7-2 - only for Wright to mount a fightback which brought the 1,000-strong crowd to its feet.
Wright took out finishes of 108, 121 and 129 to keep his hopes alive and then finished double eight and tops as Taylor was punished for missing three match darts. Taylor, though, again proved too strong in a deciding leg as he recovered from two further missed match darts - at tops - by landing double ten to gleefully claim the trophy. 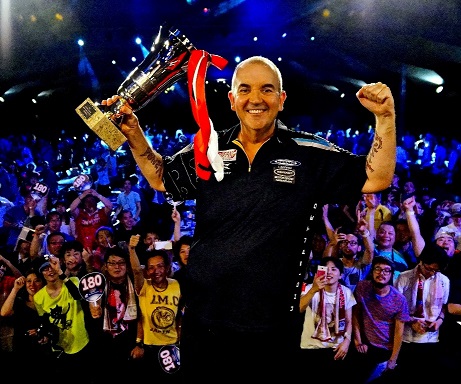 "It's very special to be the first winner in Japan and I've put a huge amount of effort in this week," said Taylor. "The semi-finals and finals were two of the toughest games I could have had and it shows how darts is progressing now. The Gary Anderson game was an incredible match and the win over Peter was very special and very tough. He did brilliantly to beat Michael van Gerwen and gave me a real run for my money in the final. When he was coming back at me in the final, even though I was trying to win every leg it was in my mind that I had the throw in the final leg, and it went to the last leg!"
Taylor's win added to his previous World Series of Darts double in Sydney and last year's Perth triumph, as he claimed glory in Japan for the first time. "I've loved every minute of it and the crowds were brilliant," he added. "I didn't think they'd be as animated as they were and it was like a rock concert at times, and they gave every player fantastic support."

Wright's loss means that he has now been defeated in all four televised finals he has reached, but he is aiming to bounce back to silverware in August's treble-header of World Series of Darts events in Australia and New Zealand.

"I can't be too disappointed - I'll get Phil next time!" he said. "I'm getting closer to a big trophy and hopefully it can be when the World Series visits Australia. I started off too slowly in the final and when I was 7-2 down I didn't want to roll over because I knew I was better than that and I deserved to be in the final. I never gave up and I came back at Phil, but it was a little bit too late." 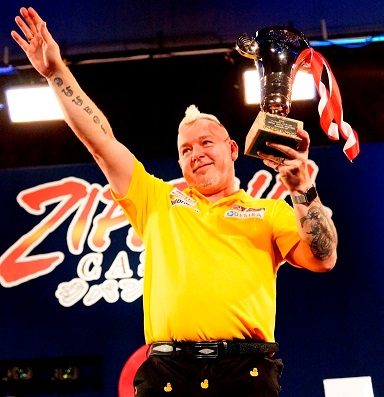 Wright had received incredible support from the Japanese crowd throughout the event, and broke down in tears as he celebrated his stunning semi-final triumph. "It was a fantastic crowd and the support they gave me was like nothing I've ever received before," he added. "The 141 was one of the best shots I've ever hit. I knew I was going to get it, and I just wanted to get a shot and I did it - and that was for the fans really. They picked me up when I went behind against Michael. He played some fantastic darts after I went 4-2 up and showed what a great player he is but the fans carried me through."

World Champion and Premier League champion Anderson missed out on a World Series of Darts win for the second successive event in the semi-finals to Taylor, but said: "I enjoyed it. "I didn't give James a chance in the quarter-finals and that was a good performance, and Phil just edged it in the semis. It's been a good tournament but I made a couple of mistakes against Phil - miscounting being one of them - and he punished me. The miscount put me off for a couple of legs but in the last leg I had the throw and made a mess of it, and Phil did what he does."
Anderson added: "We didn't know what to expect coming over here, but the crowd has been absolutely fantastic. I very much hope we come across here again, and hopefully it will encourage more Japanese people to play the game too. The Japanese players did really well. Yuki Yamada, who I played in the first round, is a classy player who's played soft-tip and is now on the steel-tip, and he's talking about playing in Q School. If you give him a year we could have another professional Japanese darts player."

Van Gerwen had been bidding to continue his amazing 2015 by following up his recent Dubai Duty Free Darts Masters win with another title, but was left to rue his narrow semi-final defeat to Wright.
"The tournament was fantastic but I wanted to win here and I didn't do that," said van Gerwen. "I wasn't good enough tonight. The fans were great but I feel like I let them down and I need to play better next time we're here." 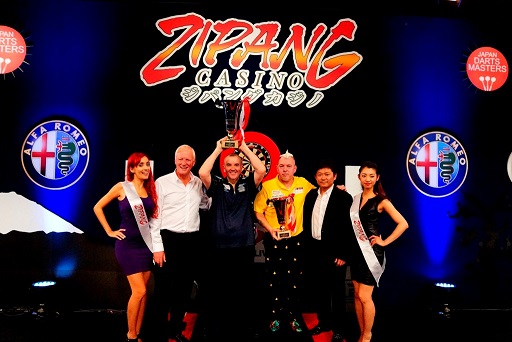