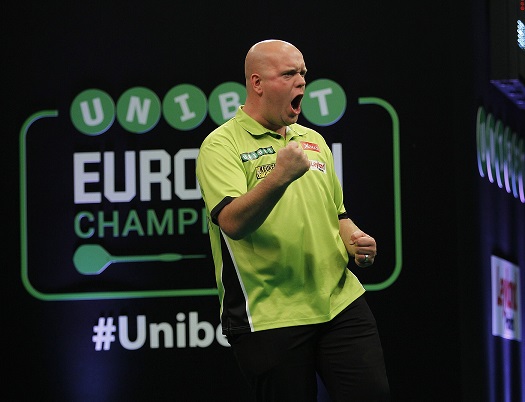 MICHAEL VAN GERWEN and Peter Wright both missed double 12 for nine-dart finishes during a thrilling second round at the Unibet European Championship in Hasselt on Saturday.

Reigning champion van Gerwen continued his bid to claim a third successive win in the event with a blistering 10-2 win over Gerwyn Price as he landed nine 180s and averaged 105.50 as he moved into the quarter-finals at the Ethias Arena.
Van Gerwen, though, narrowly missed out on a perfect leg during an explosive contest with the Welshman, who seemed only to spur his opponent into life by claiming the game's opening leg. The Dutchman opened the second with back-to-back maximums before landing another treble 20 and treble 19 in his bid for a nine-darter - which ended with a missed double 12 only for him to level in ten darts. He also landed two more 180s in a 12-darter to move ahead and added further maximums in the next two legs, with a 144 checkout moving him 4-1 up before he punished a missed bull from Price to move four legs clear. Price landed a 180 and a 76 finish to respond, but another 12-darter from van Gerwen featured two more maximums, and he stormed through the next four legs without reply to set up a quarter-final tie with Jelle Klaasen.
"I played really well, especially for the first ten legs," said van Gerwen. "It's all about winning the game and I did enough today to win the game, and I'm feeling good. Tomorrow's going to be a long day with three games in the day but I'm ready for that and I'll be focusing on the quarter-final against Jelle. My record against him is really good but he's playing well." 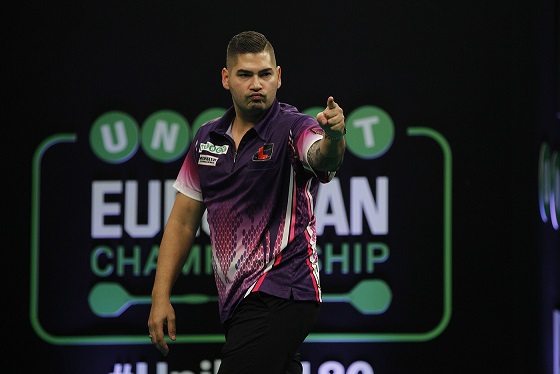 Klaasen also averaged over 100 as he raced into the quarter-finals for a third successive year by defeating Stephen Bunting 10-4, overcoming some dodgy doubling after landing nine maximums in a heavy-scoring display.
The Dutchman, as he had 24 hours earlier in his first round win, stormed out of the blocks by winning the first three legs in style, finishing a 13-darter, 117 and double 16. A string of missed doubles in the next three legs allowed Bunting to take out 68, 84 and double 16 to level, before Klaasen recovered from 17 successive missed doubles to win the seventh and eighth legs and edge 5-3 up. Bunting responded with an 11-darter as both players landed two maximums apiece in leg nine, but any hopes of a fightback were ended as Klaasen pulled clear with four successive legs, including an 11-darter and a 125 finish as he romped to victory.
"My scoring was good throughout the whole game but I had some sloppy darts," admitted Klaasen. "Overall I scored very well and I played well in the last few legs to finish the game. I have to practice a little bit more on the doubles but I don't have to change that much, just be a little bit more consistent. I'm happy with the way I played and I'm playing well enough to win this, but it's all on the day. My confidence is there and I can look forward to the quarter-finals, and if I hit my doubles well I can beat everyone." 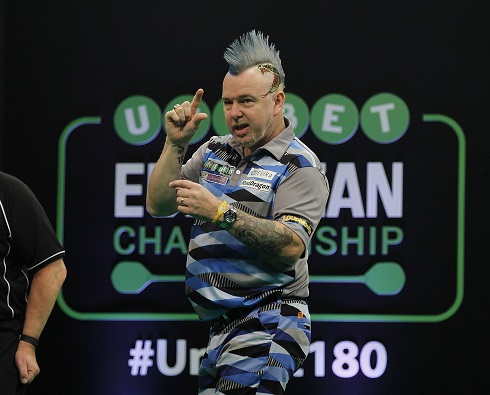 World number five Wright, a semi-finalist 12 months ago, also missed double 12 for a nine-dart finish - which would have been his first in a televised game - as he defeated Cristo Reyes 10-7.
After the pair shared the first two legs, Wright kicked off the third with successive maximums before landing a seventh treble 20 and treble 19, only to miss the double 12 for the 141 finish to complete a perfect leg. Wright also missed a further three darts at doubles as Reyes followed his own 180 by snatching the leg for a 2-1 lead, and the Spanish ace also led 3-2 before his rival took four legs out of five to move 6-4 up. Wright landed a third 76 finish of the game as he claimed a seventh leg and edged three legs clear before Reyes took out 119 to stay in touch at 8-6, but he was unable to close the gap any further as the Scot closed out a 10-7 triumph.
"My finishing was good and it's great to be through," said Wright, who now meets Kyle Anderson on Sunday afternoon. "I've chopped and changed with my darts but Red Dragon have finally found me a dart that I want and I think I've found the right dart, and everyone else can watch out when I start playing properly with them! I feel I can average over 110 easily but that will come with a little bit more practice. I love playing Kyle, he's a lovely guy and it will be a good match."

Australian ace Anderson had earlier won through to only his second major ranking quarter-final with a clinical display of finishing against James Richardson.
The Australian took seven of the opening eight legs with some fine doubling, including checkouts of 63 and 76, to leave Richardson trailing, with only a solitary double four putting the world number 78 on the scoreboard. The Northamptonshire ace hit back on double five in leg nine, but Anderson followed up tops with a 180 and double eight as he moved 9-2 up. Finishes of 75 and 60 for Richardson, plus his first maximum of the game, kept his hopes alive briefly, but any chance of a fightback was ended as Anderson followed his fifth 180 with a 68 finish to seal his last eight place.

"I felt comfortable and it showed there," said Anderson. "I thought I was a bit pushy with my throw in the first round, but I'm really pleased with this game and I can still improve. I'd obviously love to win this title but I'm not thinking any further than winning my next game and hitting the doubles I need in that."

Four-time European Champion Phil Taylor stormed past Joe Cullen with a 10-3 victory as he moved into the quarter-finals in style with a second successive ton-plus average. Taylor followed up his win over Alan Norris on Friday with another dominant display, finishing ten doubles from 15 attempts to deny Cullen his second major quarter-final. Cullen was first to a double in the game, but missed the bull as Taylor took out 106 to claim the opener before landing a 180 as he doubled his lead before the youngster took out 87 to get off the mark. Cullen shared the next two to remain in touch at 3-2, only to see Taylor finish 123 amongst three successive legs as he pulled clear, with double 16 seeing the Bradford thrower respond briefly only for four further legs to move the 56-year-old into the last eight.

Taylor now takes on Mensur Suljovic, whose bid to win a maiden major title saw him hold off a spirited fightback from Ian White to move into the last eight with a narrow 10-9 win. The Austrian hit back from a leg down to lead 4-1 and 7-2 with some superb darts, including a 102 finish, and he also led 8-3 before White - inspired by back-to-back checkouts of 141 and 102 - took five successive legs to level. Tops edged Suljovic back ahead at 9-8, but a missed match dart allwoed White to level and force a decider, but when the Austrian scored 140, 140 and 137 he was first to a finish before landing tops to finally complete the win. 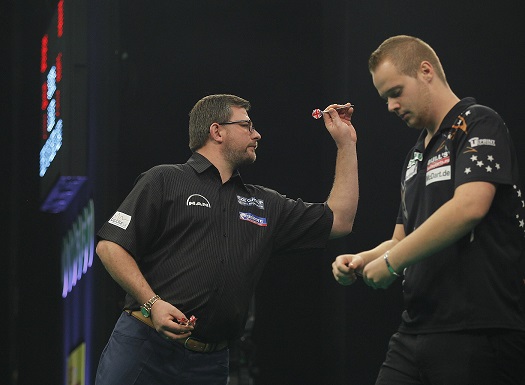 James Wade followed up his first round whitewash of World Champion Gary Anderson with an outstanding 10-3 defeat of German youngster Max Hopp, with the left-hander finishing 50 percent of his darts at a double in a fine display. Wade finished 64, 138 and tops in a superb start to lead 3-0 before Hopp followed a 180 with a 96 finish to get off the mark in leg four. The next four were shared before Hopp's missed doubles were punished as Wade moved 7-3 up before hitting two 13-darters in the next three legs to complete a strong win.
"I've prepared well for this event and it's paying off so far," said Wade. "I really enjoyed that game and I know that I've got to stop making excuses and start turning up and playing darts, and I loved the battle there. I did a job against Max but I believe that he thought a little bit too much about the game and I was the better player on the day, and I'm looking forward to the next game." 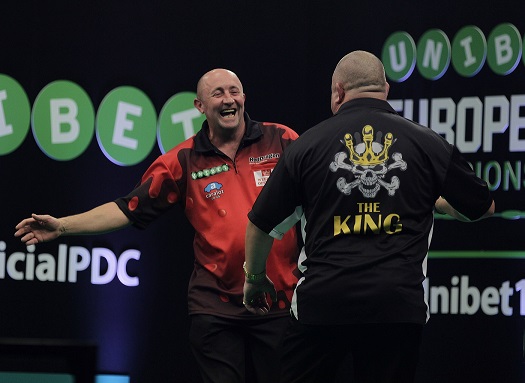 Wade now takes on James Wilson, who reached his first major PDC quarter-final by surviving a final-leg thriller with Mervyn King to take a 10-8 triumph. After seeing Wilson win the opening leg, King produced some outstanding darts to move 4-2 up, including a 12-darter and a 138 finish, and after the Yorkshireman had taken three in a row to edge ahead he landed a ten-darter to level at five-all. Wilson's 11-darter was followed by finishes of 100 and 86, on the bull, from King as the pair traded legs without being able to break as the game progressed to a decider, which the European Championship debutant took on double 18 with a fine 14-dart finish.
Wilson, a former BDO number one and World Trophy winner before joining the PDC circuit, will now contest for his first televised PDC title on Sunday.