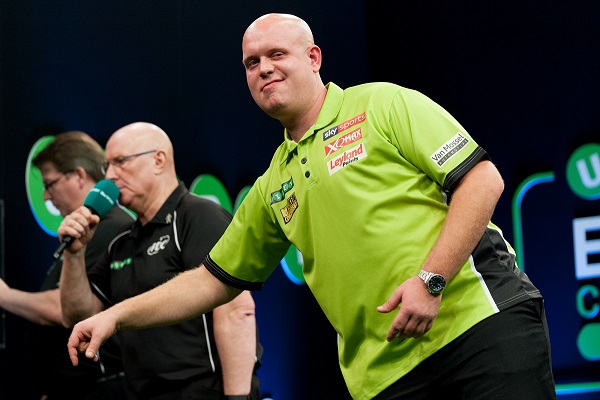 World Champion Van Gerwen has claimed the last three European Championship titles, and announced his return from the ankle injury which cut short his German Darts Masters challenge last weekend with a solid win. Dekker shared the opening four legs, but saw Van Gerwen pull clear from two-all to claim the next four legs, with two third-dart doubles followed by a 92 checkout as he progressed to round two.

"It's a good start for me," said Van Gerwen, who averaged 96 as he set up a second round tie on Friday night with Ian White. "I was a little bit slow at the start but I got into my rhythm, and I can look forward to the second round now. It's a longer format, which suits my game." 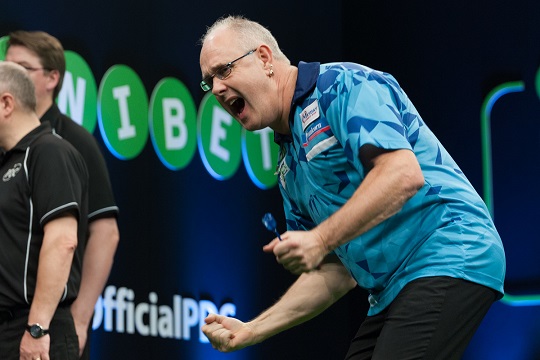 White came from 3-1 down before defeating Darren Webster 6-5 in a thriller to secure his spot in the last 16.
White's opening 100 checkout was topped by a superb 160 combination from Webster in leg two before the Norwich man capitalised on some sloppy finishing from the Stoke ace to move 3-1 up. White moved 4-3 up only to miss his chance in leg eight as Webster took out 76 to snatch the leg, with the next two shared as the game went to a decider only for the Norfolk man to miss two match darts and allow his rival in to finish 93.

"I could have been 4-1 up but I gave a few legs away and found myself 3-2 down," said White. "You shouldn't be missing the big numbers and when I was doing that Darren punished me. "It was nice at the end to take out the 93 and I'm still in the tournament so I've got to knuckle down now and get ready for the next match. I've not had the best of luck this year but I'll keep going." 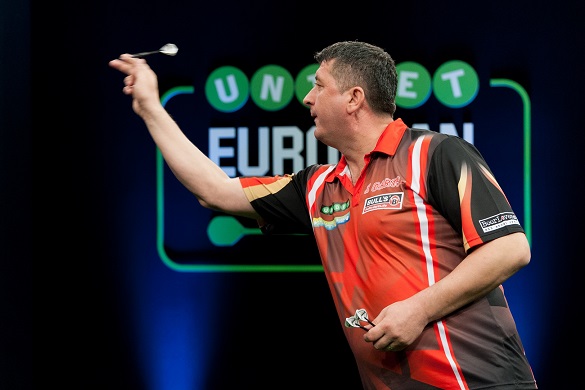 2016 European Championship finalist Mensur Suljovic held off the challenge of Kim Huybrechts to deny the Belgian a home victory, taking a 6-5 win from their tie. Suljovic produced some superb early finishing as combinations of 94, 76 and 60 moved him 3-0 up, with a brace of double 16 finishes seeing Huybrechts respond before checkouts of 100 and 116 moved the Austrian 5-3 up. Three missed match darts across the next two legs allowed Antwerp's Huybrechts to take the game into a decider, but Suljovic opened with a 177 and was first to a finish as tops saw him finally cross the winning line. 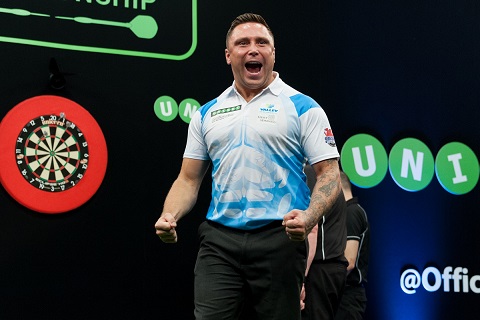 Huybrechts' elder brother Ronny also lost out in a deciding leg, as Gerwyn Price produced a superb fightback from 5-3 down to win a high-quality opening tie at the Ethias Arena.
The Belgian's early 143 finish was followed by the pair trading 13-darters before Price finished 97 to move 3-2 up, only for Huybrechts to win three in a row and move to the brink of victory. Neat finishes of 78 and 72 from Price took the game into a decider, where a 180 left the Welsh ace 67 before tops - with his rival waiting on 40 - sealed the UK Open finalist's comeback.

"From 5-3 it's hard to come back but I stuck in there," said Price. "I'm usually the one in front and losing games but thankfully I came through this one. "I wasn't playing at the top of my game but I knew if I could up my scoring a little bit I'd have more chances and thankfully in the last leg I banged a 180 in. "My doubles went in well, I think it was six out of eight, so I can build on this now and hopefully get a bit better in the second round. I'm taking every round as it comes and I'm just happy to get through." 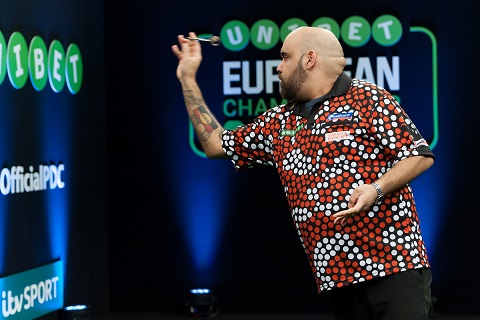 2016 quarter-finalist Kyle Anderson enjoyed a winning return to the Ethias Arena stage by sweeping past John Henderson 6-1, averaging 97 in a strong display. The pair shared the opening two legs, but Anderson stepped in following misses in two of the next three and also took out 116 as he moved 4-1 up, before the Australian finished tops and double five to complete the win. 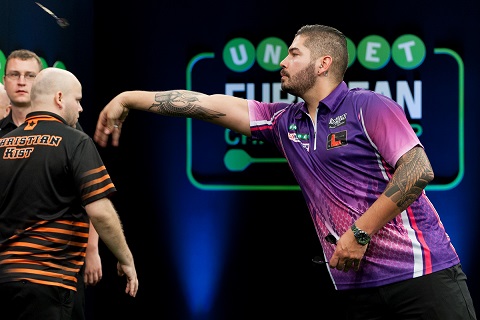 Anderson now takes on Jelle Klaasen, who whitewashed Christian Kist 6-0 in their all-Dutch battle without his rival - who continues to battle against an arm problem - having a dart at a double.
Klaasen - who underwent a wrist operation in May - said: "It's tough because I know what Christian is going through, I've been like that this year when I had my wrist injury and it's terrible but I had to do my job and I've done that. "I've got a good record in this tournament and I feel good." 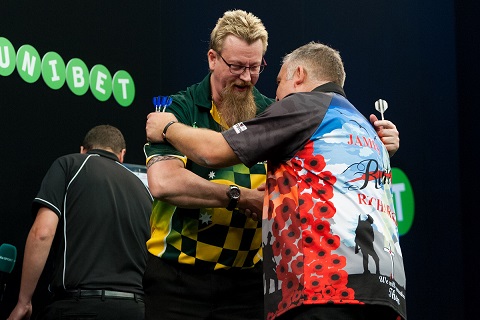 2012 champion Simon Whitlock began his bid for a second European Championship title with a 6-3 comeback win over James Richardson, who led 2-1 in the early stages of their contest.
Whitlock levelled in leg four before taking out a key 90 on the bull in the fifth - after his rival missed three darts at doubles - and double ten to open up a 4-2 lead, before answering a Richardson 71 checkout with finishes of 68 and 64.

"This is a big win because James is a solid player," said Whitlock. "I felt coming into the match that I had a big bull finish in me, and the 90 was just that to put me in front. "I'd love to win this tournament again and I'm feeling good." 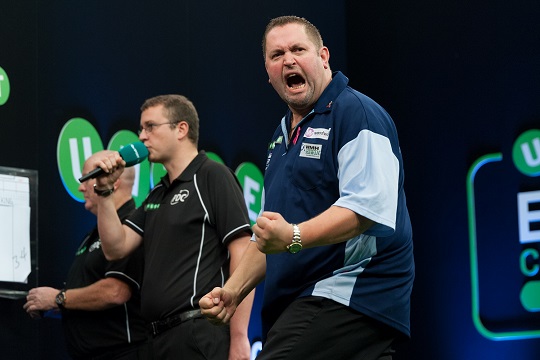 Whitlock now faces a second round tie with Alan Norris, who was another player to battle from behind for victory as he edged out Mervyn King 6-4 in their first round contest. King came from 3-2 down to lead 4-3 with a break of throw in leg seven, only to miss three darts at a double in the next as Norris levelled before taking out 121 on the bull and tops to seal the win.