MICHAEL VAN GERWEN withstood a nine-dart finish from Kyle Anderson and the challenge of Rob Cross to claim his fourth successive Unibet European Championship title in Hasselt on Sunday night. 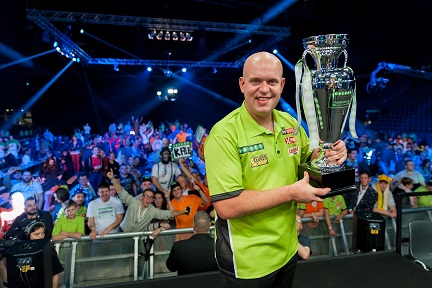 Dutch star Van Gerwen's dominance of the European Championship continued as he scooped the 100,000 pound first prize and retained the title once again, although he was pushed all the way on a thrilling final day.
Having seen off Simon Whitlock 10-5 in the quarter-finals, Van Gerwen found himself staring defeat in the face during a see-saw semi-final with another Australian, Kyle Anderson. Anderson led 2-0 and 3-2 before Van Gerwen took four legs in a row to move ahead, but then the Auckland Darts Masters winner achieved perfection in leg 11, hitting two 180s before finishing 141. Van Gerwen hit back to lead 8-5, but Anderson then took four legs to put himself back ahead before the game went to a deciding 21st leg, where the Australian missed two match darts before the World Champion finished 76 to snatch victory.
Van Gerwen then took on shooting star Cross in the final, and was pushed all the way before finally reclaiming the title with an 11-7 triumph - matching Phil Taylor's achievement of four successive wins in the event from 2008-2011. The final's opening five legs went with throw to leave Cross 3-2 up, despite a 104 finish from Van Gerwen, before the world number one fired in a ten-darter in leg six and a 12-darter to break and move 4-3 up. Cross hit back with a 12-darter, bizarrely scoring 39, 180 and 180 before finishing 102 with an improvised single one, treble 17 and bullseye combination to square the game at four-all. After Van Gerwen claimed the ninth leg, Cross also landed an 11-darter to level once more, but Van Gerwen took four of the next five to pull clear at 9-6. Van Gerwen then landed a seventh 180 and a 130 bullseye finish in a 12-darter to move a leg away from the win, and though Cross replied on tops it was the Dutchman who sealed a stunning victory on double 16. 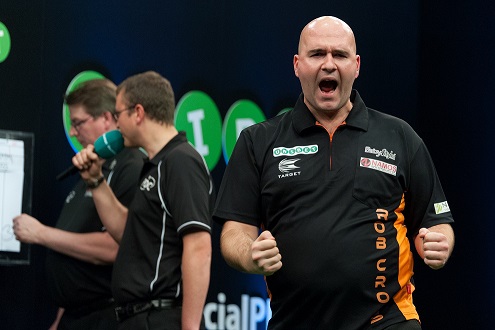 "I think it was a great final," said Van Gerwen, who averaged 108.91 in an imperious display in the final. "Rob kept putting me under pressure and I had to play well. "I didn't realise my average in the final was so high but I'm really happy with that. "I didn't play my best game in the semi-final but I'm really glad I won this title - it feels good for me and it means a lot to me. I always want to perform and I want to keep playing well."

Cross had won through to his first TV final by continuing his brilliant debut year on the circuit as he saw off Michael Smith 10-4 in the quarter-finals and then raced past Daryl Gurney 11-3 in the semi-finals.
The former electrician from Sussex, who has won four ranking titles and reached two European Tour finals this year, picked up 40,000 pound as runner-up and also qualifies for next month's bwin Grand Slam of Darts in Wolverhampton.
Cross averaged 102.39 in defeat in the final, and admitted: "I had one flat session and that's what cost me, those five legs after the second break, but I've had a fantastic week. "Michael is phenomenal and he's a player for me to look up to with what he's doing in the game and his dominance. What I've done in ten months is amazing but I want to keep progressing and enjoying it too." 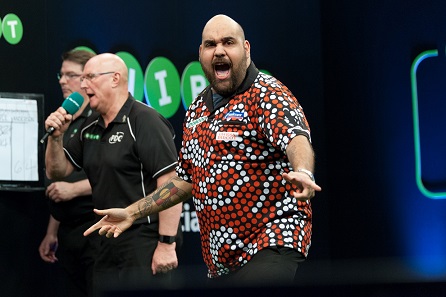 World Grand Prix champion Gurney had been bidding to claim his second televised title as he produced a fine performance in a 10-5 quarter-final win over Peter Wright, but was unable to repeat the feat against Cross.
Anderson had reached his first televised ranking semi-final with a 10-7 win over Mensur Suljovic in the last eight, and alongside 20,000 pound prize money he also claimed a 25,000 pound bonus for his nine-dart finish at the Ethias Arena.
"I loved every minute of it," reflected Anderson, of a semi-final in which he landed 11 maximums. "The nine-darter was great but I wanted to get to the final and to win this tournament. "I had my opportunity but the double ten and double five were on the wrong side of the wire and full credit to Michael."