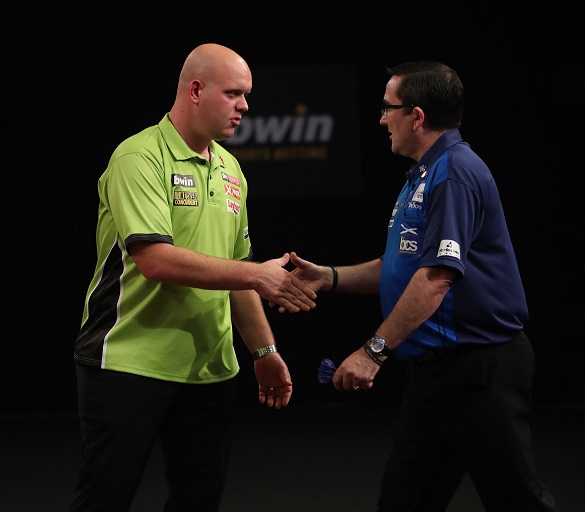 Dutch star Van Gerwen, the winner in 2015 and 2016 at the Wolves Civic, dropped just one leg as he powered past Scottish debutant Ross Montgomery to begin his bid for a third straight title. The number one seed now plays Rob Cross on Sunday in a repeat of the recent European Championship final, after the emerging star from Sussex averaged an impressive 104 in his own 5-1 win, against Joe Murnan.

"It's a good start," said Van Gerwen. "I was never troubled and it was a solid win. "I hit the right shots and the right moments and I want to keep that going. Of course I want to add another title this week and I know I've got more in the tank." 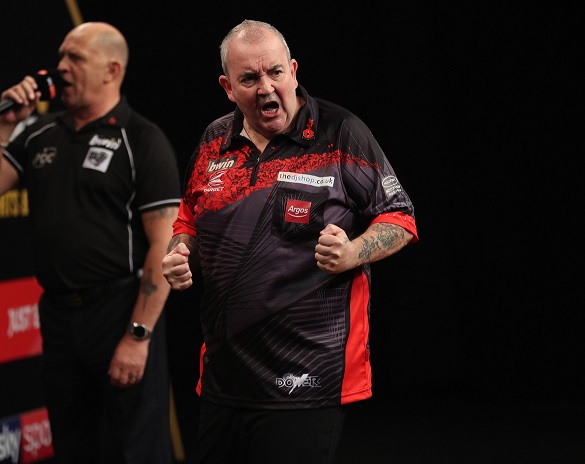 Six-time champion Phil Taylor also dropped only one leg as he saw off Australian Peter Machin, the BDO World Trophy winner, to begin his final Wolverhampton challenge before retirement in strong style.

"It's nice to win but I was a bit nervous, especially when I gave him the second leg," said Taylor, who now faces Robbie Green. "Winning today isn't as important, you have to win tomorrow." 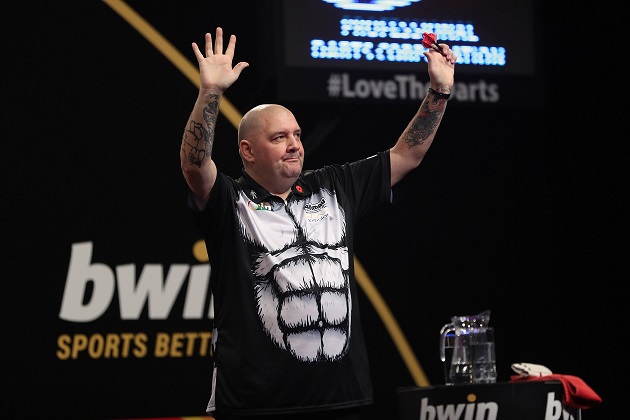 Green also claimed an opening 5-1 victory in Group C as he overcame a below-par James Wade, with the two-time Grand Slam of Darts finalist now facing a must-win tie with Machin on Sunday. The 43-year-old from Wallasey had also found himself in hospital during the night ahead of his Grand Slam opener following an insect bite to his head, but showed no ill-effects on the oche.

"It's been a crazy day but life throws challenges at you and you've got to overcome them," said Green. "I woke up at 4am and my face was swollen, I had to go to A&E and they put me on antibiotics. It's feeling better and hopefully it will keep improving." 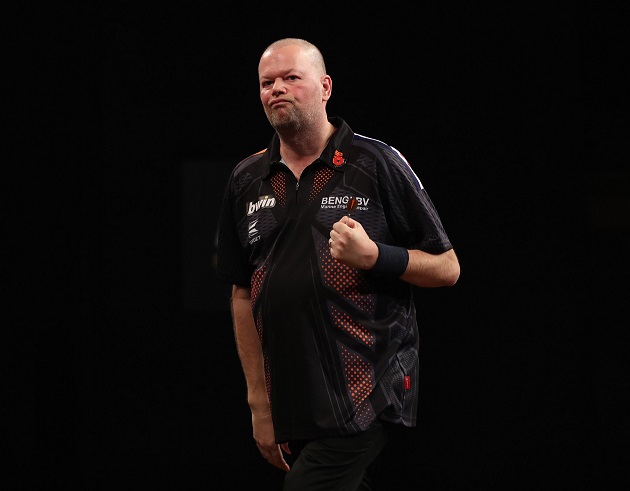 Van Barneveld, meanwhile, swept aside local hero Jamie Hughes 5-1 as the 2012 champion came from a leg down to average almost 99 in opening Group B with a win. He now plays Welshman Gerwen Price, who held off a fightback from young Irish qualifier Steve Lennon to claim a 5-3 victory in their opening fixture. 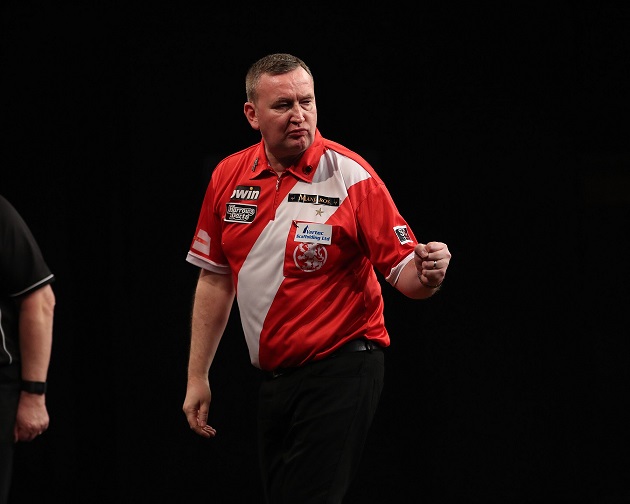 Reigning Lakeside Champion Glen Durrant was the opening day's most impressive winner as he stormed to a 5-2 win over number two seed Peter Wright, averaging 106.05

"That's a perfect start for me and I'm delighted with that," said Durrant. "I wasn't sure exactly where my game was at and this is a real opportunity to see where I am. "That's probably my highest average in a TV tournament and I felt good. I was controlled and I stayed calm, even though inside I was doing cartwheels." 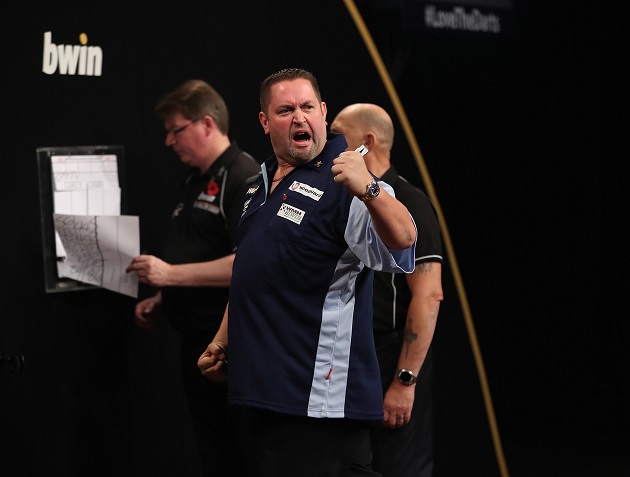 Durrant now plays Alan Norris, who survived one missed match dart from Australian newcomer Corey Cadby before escaping with the points from their Group E opener.

World Grand Prix champion Daryl Gurney was in clinical mood as he hit five doubles from eight attempts in seeing off Dutchman Danny Noppert, with the number four seed now meeting Mark Webster. Webster defied a 156 checkout from namesake Darren Webster to claim a 5-3 as finishes of 96 and 117 turned the tie the Welshman's way.
Two-time World Champion Gary Anderson landed a 148 checkout as he overcame fellow Scot Cameron Menzies 5-3 in Group H. Anderson now plays young Dutchman Berry van Peer, who battled against the effects of dartitis to defeat Simon Whitlock 5-4 in a tense opener. 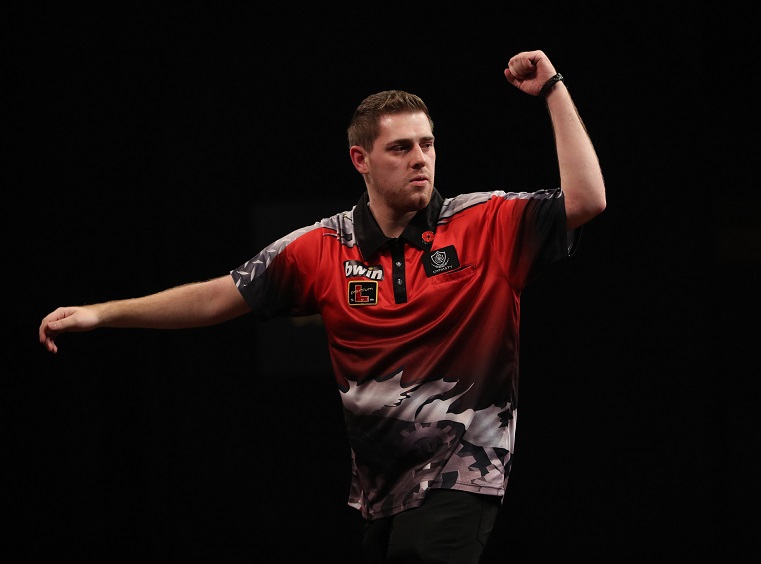 "I'm very pleased with that," said Van Peer. "Simon missed some doubles and I took my chances but it wasn't easy. "I had trouble with dartitis recently and I was okay, but at the World Youth Championship I got it back a bit. I've been back to the physiotherapist but on pressure moments it happens. "It's hard to play with and I was trying to compose myself, but I got there in the end." 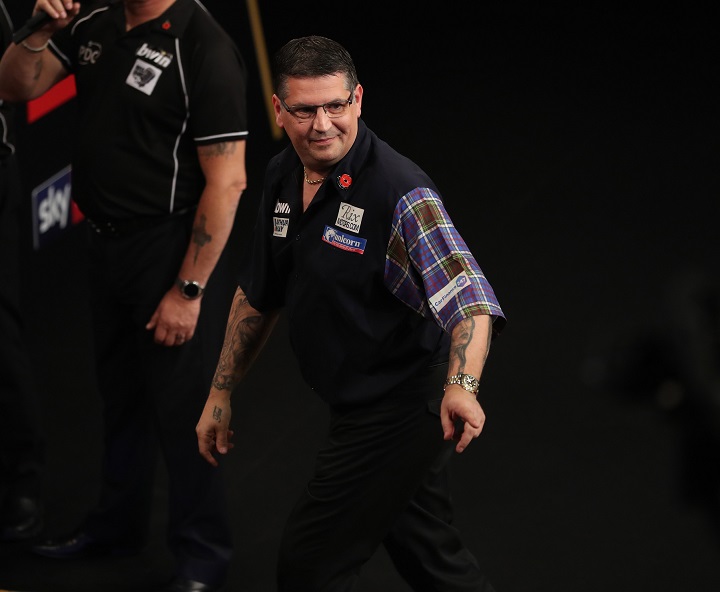 Former Wolverhampton finalist Dave Chisnall made a strong start with a 5-2 defeat of Scott Mitchell and now takes on St Helens rival Stephen Bunting, who opened Group F with a 5-4 win over Jeffrey de Zwaan.
September's Champions League of Darts winner Mensur Suljovic reeled off four straight legs from 2-1 down to defeat BDO number one Mark McGeeney with a 5-2 success. Suljovic's opponent in their second Group G game will be Michael Smith after the former World Youth Champion saw off James Wilson 5-3.