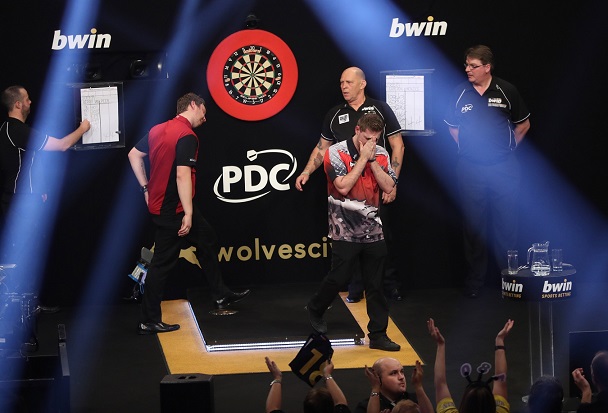 TEARFUL Berry van Peer secured a second round spot in the bwin Grand Slam of Darts on a dramatic Monday night in Wolverhampton, as Peter Wright, Michael Smith and Dave Chisnall edged into the knockout stages.

Former World Youth Championship finalist Van Peer has won the hearts of the Wolves Civic crowds and millions watching around the world as he battles publicly against dartitis, where he struggles to release his darts. However, the youngster followed up his win over Simon Whitlock on his Grand Slam debut on Saturday with a 5-4 win over Cameron Menzies in their decisive Group H contest.
Van Peer opened the tie with a 78 finish and claimed three legs in a row from 2-1 down to move to the brink of victory at 4-2. After missing match darts in leg seven, Menzies finished 68 and tops to force a decider, but the Scot missed his chance to claim victory in a tense finale before Van Peer hit double ten to claim an emotional win.

"I'm feeling good because I won but it was tough for me - I feel like I'm dreaming," said Van Peer. "I'd have been happy just to win a couple of legs in every game, but then I won my first game. "It was an unbelievable match today. I got some tips and they've really helped me through the game. I tried to compose myself every time, I started well and to win was great but it was so hard. "I've qualified for this for a reason and I wanted to enjoy it, and I can say I stood there and achieved more than I could hope for."

Gary Anderson progressed to the knockout stages with a 100 percent record in Group H as he completed a disappointing three days for winless Whitlock with a 5-2 triumph over the Australian.
The Scot followed up his wins over Cameron Menzies and Berry van Peer with a strong 104.73 average to see off Whitlock, hitting five 180s, a 130 finish and two 13-darters to top Group H.

"I thought it was a bit of an iffy game but I'm glad to get through with three wins," said Anderson. "I've had a lot of time off but I'm getting back into it and starting to get my game back to where I want to be." 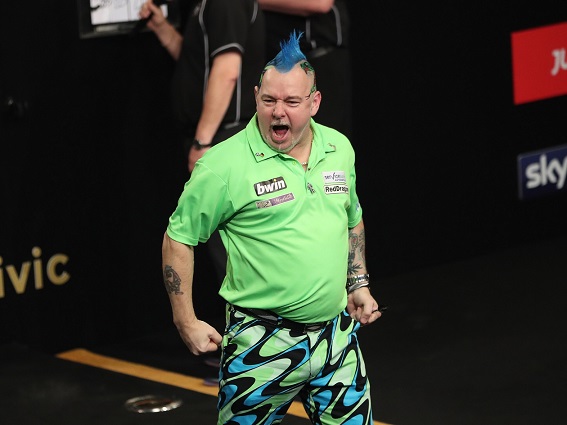 Number two seed Peter Wright claimed his second round spot with a dramatic 5-4 win over Alan Norris in their Group E shoot-out.
A tight battle saw the opening seven legs go with throw as Norris edged 4-3 up before Wright landed a 180 and then took out a brilliant 170 finish to take the game into a decider. Wright then landed a 180 to leave 36, and when Norris missed tops for a 105 finish the Scot stepped in to complete a 14-darter as he sealed a second round place.

"It was tough so I'm relieved to win it but Alan played really well and it was so hard to break his throw," said Wright. "You have to battle and sometimes you have to win dirty, and I did that today. "I've still got to improve but I'm through and I can get ready for the last 16 now because there are still so many players who can win this. "I'm glad that these darts worked under pressure because I've only been using this design for three games but I know there's more in the tank." 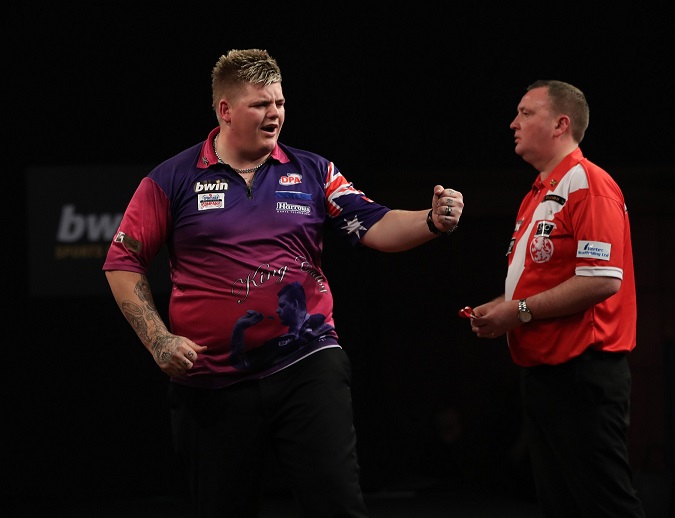 Corey Cadby claimed a consolation victory in Group E as he defeated Glen Durrant, the Lakeside Champion who had already secured his last 16 place.
Former World Youth Champion Cadby took out 120 and 79 as he came from a leg down to lead 3-1 and also took a 4-2 lead before Durrant hit back to level, but the Australian showed his class with a maximum and a 90 finish to snatch the win.

"It was a battle because Glen is playing really well, so to finish off with a win is nice," said Cadby. "It's better than going out with three losses, and unfortunately I'm not going through but I'll move on now." 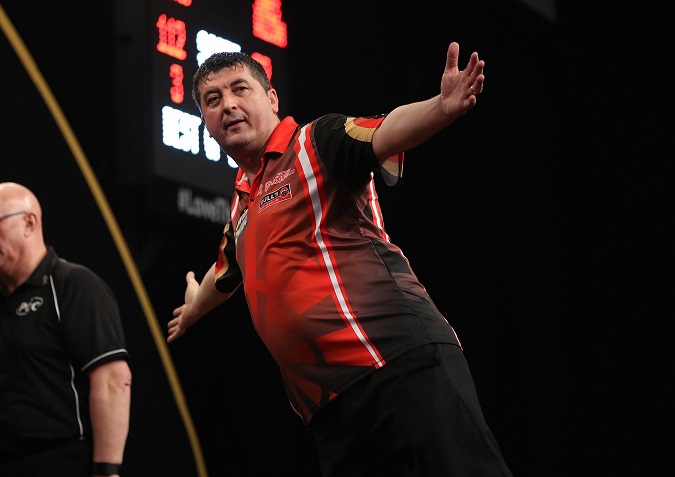 Austrian ace Mensur Suljovic secured his own qualification from Group G and aided the progression of Michael Smith into the knockout stage with his narrow 5-4 win over James Wilson.
Wilson produced some excellent finishing to lead 2-0 and also finished 124 and 60 to move 4-3 up, but Suljovic followed an earlier 123 checkout with a 112 combination to force a decider, which he won on tops.

"It was a very hard game for me but I'm so happy to win it," said Suljovic. "Some of my finishes were really good, especially the 123 and 112, but it was a crazy game. "I could have won two matches and still gone out, so it's fantastic that I'm through." 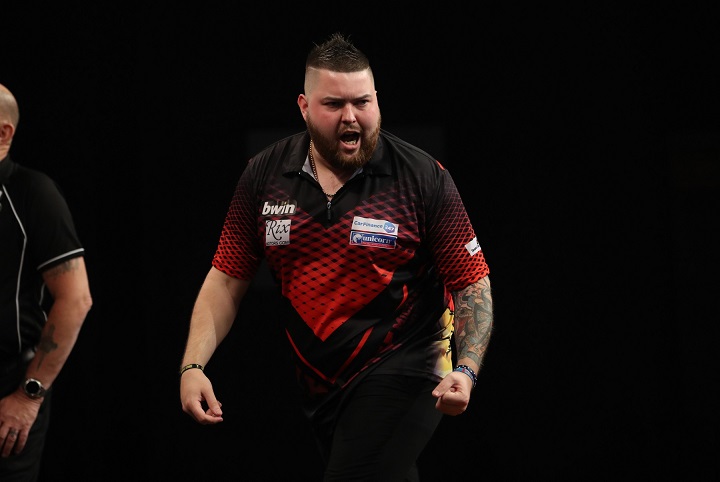 Smith had earlier defeated Mark McGeeney 5-4 to secure his second Group G win as he averaged 105 in a superb performance, hitting five doubles from six attempts to end the hopes of the BDO number one.

"It was a tough group but as long as I'm through that's all that matters - but it was hard to watch Mensur's game and I was cheering him on!" admitted Smith, who now faces mentor Gary Anderson in Wednesday's second round. "I've got a chance now that I'm through and I'm playing well. I've played well in my last two games and hit lots of 180s so I'm looking forward to playing Gary now." 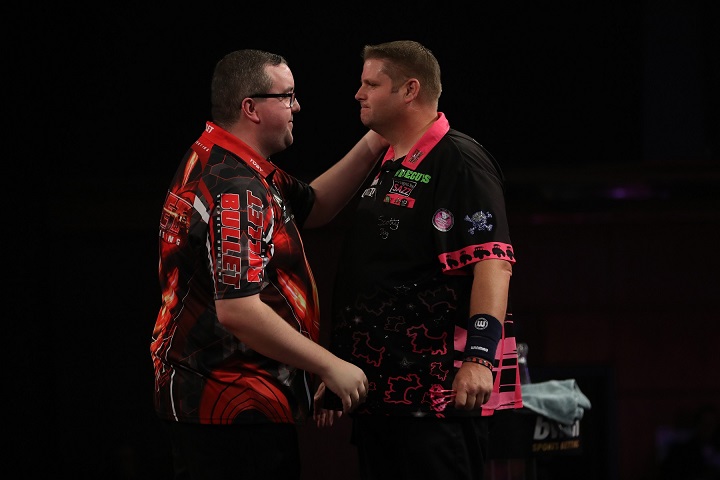 Group F also enjoyed a dramatic finale in Wolverhampton, as Stephen Bunting edged out Scott Mitchell 5-4 to secure his second round spot, with that result also meaning that Dave Chisnall progressed despite his 5-4 loss to Jeffrey de Zwaan.
Chisnall admitted: "I was so nervous watching Stephen's game and he's done me a favour. "I thought I played quite well but I didn't get the result against Jeffrey but my old mate helped me out. I feel sorry for Scott Mitchell because he played fantastically, but he let Stephen back in at the end."

Former Lakeside Champion Bunting, who won all three matches in his group, said: "I'm delighted to have come through such a tough group. "I didn't really know what the situation was with Dave and I just wanted to win, but he's a massive friend of mine and I've known him for years in St Helens and I'm sure he'd have been happy for me if had been the other way around."