GREAT rivals Phil Taylor and Michael van Gerwen will clash in the bwin Grand Slam of Darts semi-finals following their brilliant victories over Daryl Gurney and Rob Cross at the Wolves Civic on Saturday.

Six-time champion Taylor's bid to claim a seventh, and farewell, triumph in the Grand Slam of Darts continued with a 16-4 quarter-final romp against world number four Gurney. The World Grand Prix champion was aiming to claim his first-ever victory over the 16-time World Champion, but saw Taylor finish 67 percent of his darts at a double and average 104 in a ruthless display.
Gurney opened the game with a 115 finish, but Taylor finished 68 and 58 to move ahead and 115 to open up a 3-1 lead. The Northern Irish ace hit back to level after eight legs, but an incredible surge from Taylor saw him claim 12 successive legs in a relentless charge into the last four. The run began with double 12 to break throw before he took out 73, 126, 64 and 81 to gain breathing space, followed a 13-darter with a 132 checkout and then punished four missed doubles from Gurney to create a 13-4 cushion. Taylor then fired in a fourth ton-plus checkout of the game, with a 137 combination, and took out 84 to lead 15-4 before wrapping up a comprehensive win with the aid of a seventh 180 and tops. 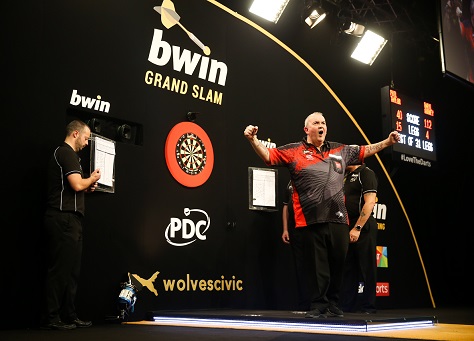 "I'm delighted to be through and I can get ready for Sunday now," said Taylor. "My finishing was brilliant tonight - I put him under pressure and that was the intention. "I thought I might give him a game because he's younger, he's fresher and at the minute he's probably playing better than I am. I did a couple of good finishes there against him and put him under pressure. "It won't do him any harm, he needs to learn. He needs to re-evaluate what he's doing, re-evaluate his career. "He's a cracking player and if I managed him he would win everything because he's one hell of a dart player, but his attitude is wrong. He needs to enjoy it more."

The night's second quarter-final proved highly dramatic and tense as newcomer Cross pushed Van Gerwen all the way for 22 legs before the reigning champion pulled clear to complete a 16-13 win.
Despite Van Gerwen opening the contest with 180 and 177 as he landed six perfect darts, Cross took out 127 for a 12-darter to break throw immediately and then took out 112 to move 2-0 up. Van Gerwen stormed back to level before an 11-darter moved the Dutchman 3-2 up, and the next nine legs went with throw as the players maintained ton-plus averages to remain locked at seven-all. Cross, though, produced an outstanding 131 checkout to break throw in leg 15, before finishing double four to move 9-7 up, only for Van Gerwen to claim a break back in leg 20 to square the game once more.
The next two were shared before finishes of 122 on the bull and 108 to break gave Van Gerwen a two-leg gap once more, before double four created a 14-11 cushion. Cross hit back to win his 12th leg, but Van Gerwen landed two 180s to his rival's one as a 12-darter moved him 15-12 up and, though the Englishman responded with a 72 finish, a pair of missed doubles in the next allowed the world number one to seal victory with a 110 checkout. "I'm really happy with this win," said Van Gerwen. "I played really well at the beginning of the game and I think he also played a phenomenal game. "I can do better and I will need to tomorrow. I don't want to let myself down and tomorrow is going to be a big game and I want to beat Phil. It's one of the last chances and I want to take it with two hands. "Phil doesn't have anything to lose. I'm the favourite and I have to do it, but I know I can handle the pressure and I've handled it for the last three years so why not now. "He's the greatest who ever played and I've got a lot of respect for that man, but not tomorrow. I want to perform well - I don't want to give him a finger because he takes your hand."