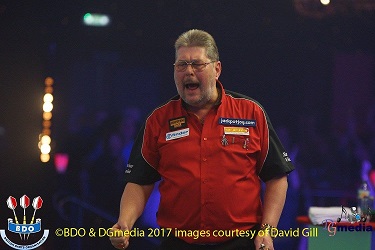 The second day of the BDO World Championship started with a thriller which tension was hard to beat. Martin Adams, who looks like he is on his way to old strength played against debutant Ryan Joyce who had already impressed in his preliminary round match. Joyce won the first set, Adams levelled in the second set with his first high finish - a 118. The third set was very close - Joyce won it in a deciding fifth leg and regained his lead. But he couldn't get rid of Adams who levelled again. It followed a memorable fifth set in which till the 4:4 Joyce always was in the lead. But then Adams won the next leg and for the first time lead in the match. Joyce managed to level again with a fantastic 164 finfish 5:5. But in the following sudden death leg Adams had the throw and he knew who to use this in his advantage and managed to win the set and the match.

The following preliminary round match between American Tom Sawyer and Paul Hogan was a very one-sided match. Sawyer only managed to win three legs, one of those with a 118 finish. He improved a lot in set three, but to be sure was way below his best and Hogan had no problems at all to win 3:0. 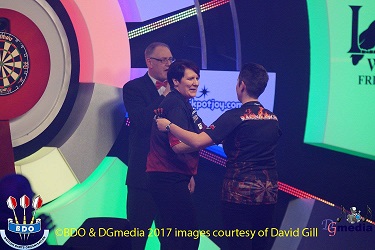 The ladies match was one sided as well as Lisa Ashton just was too good for Dutch Sharon Prins who had not really a chance. The first set was comparatively even match and went into a fifth leg but in set two Ashton had lost her edginess, played an outstanding 107,37 average, threw a 140 finish and didn't lose a leg. The 2:0 win was well deserved. 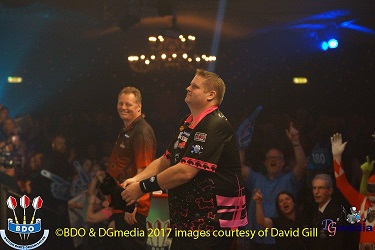 The afternoon ended with another one-sided affair: former world champion Scott Mitchell defeated Mark McGrath from New Zealand 3:0 and it was a comfortable win. An almost 88 average and a single 180 were enough. 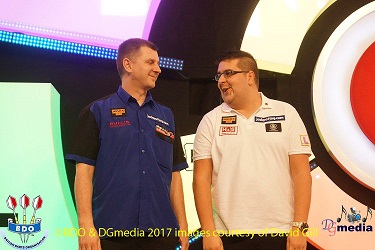 The first match of the evening was another preliminary round match between Krzysztof Ratajski from Poland and Dutch Willem Mandigers was another thrilling and evenly matched game in which the lead changed all the time. Finally in the deciding fifth set Ratajski managed to get the two legs lead he needed for the win. Both players threw four 180s each and averaged around 88, a really good preliminary round match. 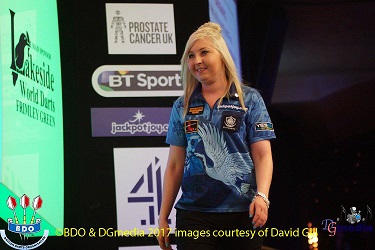 Another ladies match between Fallon Sherrock and debutant Olive Byamukama followed. Sherrock played far less impressive then Lisa Ashton but nevertheless had no problems to prevail as Byamukama only won a single leg.

The next match was again an epic preliminary round match - but not as high-class as the first one of the evening and it dragged on for a long time, as neither Australian Raymond Smith nor Belgian Davy de Baelen are fast throwers. Both players managed to win two sets though that another deciding fifth set was necessary. The Belgian, who was the favorit to win the match, only got two legs in the set. So the game ended with a surprising 3:2 win for the Australian. 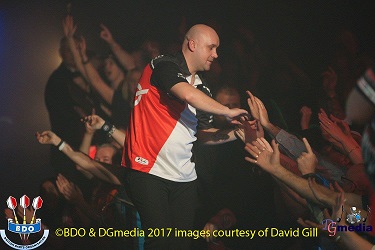 The last match of the evening started with some delay, but developed in a high-class match with advantages for Jamie Hughes over Martin Atkins. Hughes won 3:1 and had with over 94 the highest average of the day. His opponent's average was just short of 90. Both players threw four 180s each.