In the afternoon session of day three the last two preliminary round matches and a first round match of the men were played. Both preliminary round matches were rather one sided games. First Canadian David Cameron dominated his match against the young Dutchman Jimmy Hendriks though the averages of the two players were with 88.19 and 88.40 almost the same. Cameron threw a 119 high finish, Hendriks a 120 high finish, Hendriks threw three 180s, and Cameron two but Cameron's win never was in danger as Hendriks only managed to win the first set. In the following match Dennis Harbour and New Zealand's Craig Caldwell stood at the oche. It was not as high class as the first one. Caldwell only won a hard fought third set. But it was already too late for a comeback as in set four Caldwell again had no chance at all and Harbour progressed with a 3:2 win into the second round. 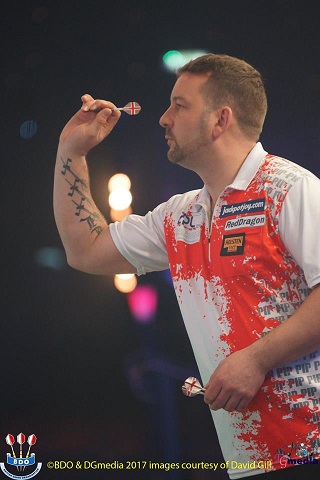 The last match of the afternoon was the first round match between Dean Reynolds and Pip Blackwell and talented young Reynolds was the favourit to win it. All in all it was not a good match but it was thrilling. As predicted Reynolds won the first set in which both players showed nerves. He won the second as well but already needed the deciding fifth leg for it. But then Reynolds eased and Blackwell won set three in the fifth leg. The fourth set was the best of the match and again Blackwell played a lot better than Reynolds. He levelled with a 101 high finish, the only one of the match. The fifth set was a weak set from both players - even Blackwell, still playing better then Reynolds never was above a 75 average. The game went into overtime at 2:2 and it was Blackwell who managed the two legs lead which was needed for the win - to be sure a surprise. 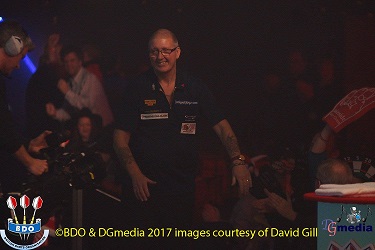 The first match in the evening session was the match between Martin Phillips and Paul Hogan. Paul Hogan was the better player and soon had a 2:0 lead. But Phillips didn't intend to give in easily and started a comeback to level 2:2- But in the deciding fifth set Phillips was off the boil and Hogan won 3:2. 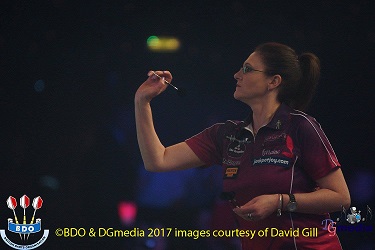 Next on was the ladies match of the day. To be sure it was one of the weaker ladies matches. Anca Zijlstra never was really in the match and never played to her full potential. She was not able to win a single leg but might be the reason was that her opponent Lorraine Winstanley - who didn't play brilliant either - scored better and showed a real clinical finishing which would have made life awkward for stronger opponents as well. So it was 2:0 Winstanley at the end. 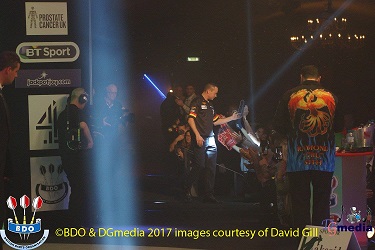 The last two matches of the evening were the two best as well. First played Belgian Geert de Vos against Australian Raymond Smith. Smith showed a much better performance than in his preliminary round match but Geert de Vos was just a little bit better. Both players had an over 90 average and de Vos threw two high finishes of 136 and 116 points. But what biased many fans for the Australian and let look Vos vague was Smith presence on stage - something unluckily not too many players have. De Vos in the end won a high fought match in which all three sets went into a deciding leg, with 3:0 by winning all three deciding legs. But Smith had shown a great performance as well. 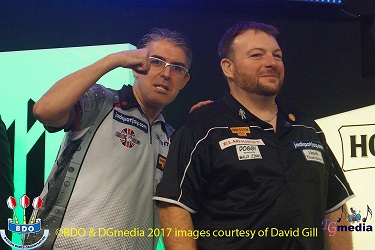 Last match of the evening was the match between last year's runner-up Canadian Jeff Smith and Brian Dawson. Dawson went as a seed as favourit into the match. Smith had first to survive the preliminary round. Smith played a quite solid first set in which Dawson looked rather nervous and won it. In the next two sets the real Jeff Smith seemed to be hiding somewhere else and Dawson took a 2:1 lead. One could almost see how Smith pulled himself together and he started to play much better. His scores were higher due to which he stood on a finish first in most parts of the next to sets. And almost every time his finishing was clinical. In the last set it looked like Dawson had given in and Smith crowned his win with a 118 finish.