On the seventh day of the BDO World Championship the two women's semi-finals and the four quarterfinals of the men were played. 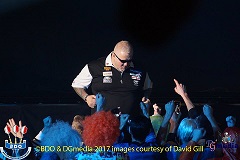 The afternoon session started with the quarterfinal between Darryl Fitton and Belgian Geert de Vos a quite close and evenly matched game, in which both players averaged just below 90. The lead changed several times and three of the sets made a deciding fifth leg necessary. De Vos threw eight 180s, Fitton six. In the first leg of the eight set Fitton hit a 170 finish, the till now only of the tournament, and that helped him to enhance his performance in set nine. He won the match 5:4. 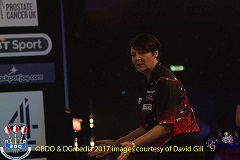 It followed the first semi-final of the women in which Lisa Ashton made short work of Aileen de Graaf. She impressed both with an average of over 85 and with a clinical finishing. Aileen de Graaf only won a single match and was not able to stop Ashton. 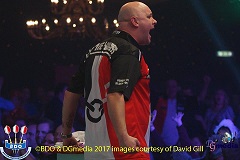 The afternoon ended with the quarterfinal between Martin Adams and Jamie Hughes - another close match which was high class as well. Both players averaged just below 90. Great were the first two sets of Martin Adams in which he couldn't fail while Hughes had problems to get going. Hughes won the third set in a deciding leg before Adams won the fourth set without losing a leg. But then Adams started to slow down and Hughes managed the 3:3. In the next set Hughes got the lead despite a 135 high finish by Adams. Adams levelled 4:4 in the following set but Hughes was too strong in set nine and won 5:4. 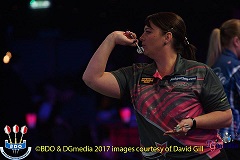 The evening began with a surprising win of Australian Corrine Hammond over Anastasia Dobromyslova who had been the favorit to win the match. But it was Hammond who won 2:0 and both sets went into a deciding fifth leg. Hammond's average was slightly lower then Dobromyslova's but her finishing was better and so for the first time in the history of the women's World Championship an Australian reached the final. But should Lisa Ashton play like she played in the semi-final Hammond will probably have no chance at all. 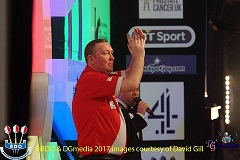 The last two men's quarterfinals followed. In the first the BDO number 1 and favorit to win the title Glen Durrant played against underdog Darius Labanauskas. It to be sure was not a fascinating game and to be sure not a commanding performance by Durrant who struggled to a 5:2 win. Most of his problems arose not due to his opponent but due to his own achievements. Might be Durrant puts to much pressure on him as he wants to switch to the PDC. But with such performances he to be sure he will not succeed there. 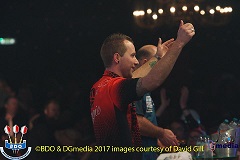 Last match of the evening was the match between reigning champion Scott Waites and Dutchman Danny Noppert and in the end Waites was eliminated from the tournament. It was quite a good game with averages of just below (Waites) and just above (Noppert) 95 but somehow Waites played a lot of sloppy darts and he didn't take his chances. Too often he couldn't hit his doubles but instead the neighbouring numbers. Noppert used this to his advantage and in the end outscored Waites as well.