THE Netherlands won the Betway World Cup of Darts for a third time as Michael van Gerwen and Raymond van Barneveld defeated Wales' Gerwyn Price and Mark Webster in Sunday's final in Frankfurt. 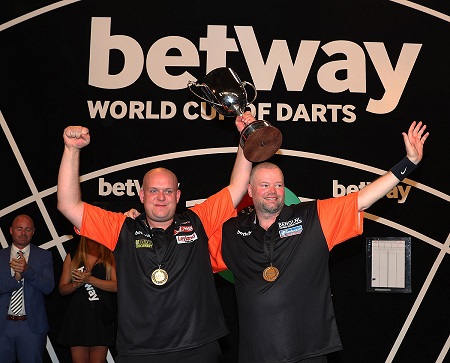 The Dutch duo had begun the weekend in dramatic fashion when World Champion Van Gerwen emerged as a doubt with a foot injury - with Benito van de Pas travelling to Germany on stand-by. However, after the world number one declared himself fit, the two-time champions eased past the Czech Republic and then saw off the United States of America and Germany in Doubles deciders at the Eissporthalle.
Their title bid continued with a 2-0 semi-final win over reigning champions England - avenging last year's defeat in the final - before they overcame Wales in a repeat of the 2010 final.
Van Gerwen opened the final with a 4-0 whitewash of UK Open finalist Price, before Webster clinically saw off Van Barneveld 4-1 to level matters. The Dutch raced into a 3-0 lead in the Doubles tie, before Price responded to Van Gerwen's 107 checkout by taking out 100 with the aid of two double tops as Wales hit back, but double 16 sealed a 4-1 result. Van Barneveld then came from a leg down to defeat Price 4-2 in the final's third Singles tie, hitting a 136 checkout in the process of sealing his World Cup hat-trick and a share of the 60,000 pound top prize. 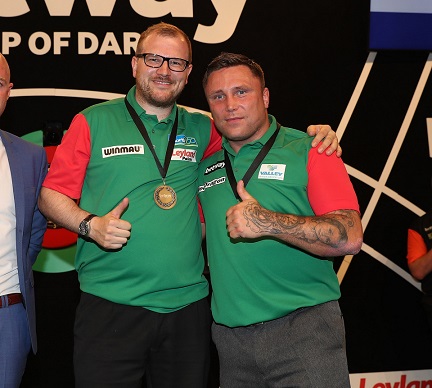 "This is fantastic," said Van Gerwen. "Only once a year we can play as a team and we're going to enjoy this. "If you're in the tournament you want to win it, On paper we were the strongest couple but you still have to do it and we played well, especially in the Pairs games we were absolutely fantastic."
Van Barneveld added: "It was an amazing tournament and I'm so happy with my third World Cup title. "Michael was really in agony on Friday and Benito came to be there if Michael couldn't play. I'm happy he played, he's a fighter and a battler and he was always there for me. "If you look back to the Pairs, it was unreal what we averaged. I was struggling in the Singles but the Pairs was our key thing, and I'm extremely happy with this." 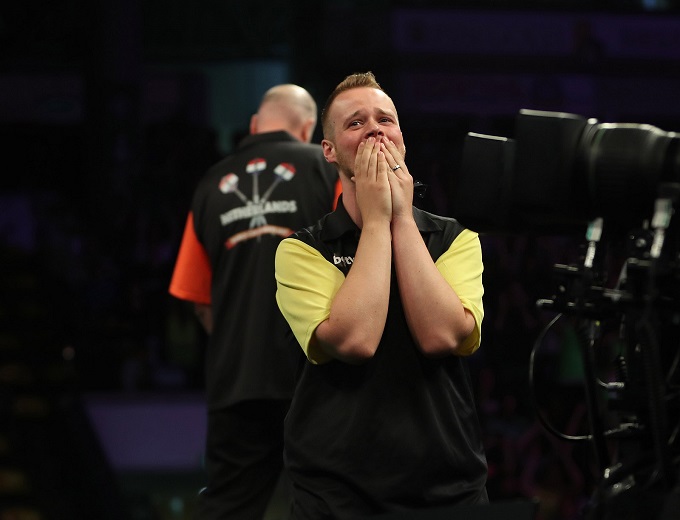 Wales' run to the final was their best finish in the tournament since Webster had been joined by Barrie Bates as they reached the 2010 decider, as they saw off Russia - for the loss of just one leg - and Belgium on Sunday.

"From day one we played pretty well, and if I knew on Thursday we'd be in the final I would have taken it," said Price. "I'm thrilled to be in the final. "It's disappointing to lose, but it's hard to pull out a big performance against people like Raymond and Michael, they're on top of their game all the time."
Webster added: "We believed we could win but they hit the big shots at the right time. I'm really proud of what we've done, I've had a great weekend with Gezzy and enjoyed every minute of it." 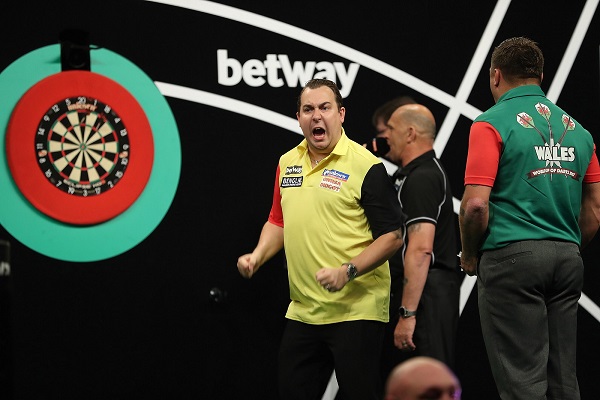 Belgian duo Kim and Ronny Huybrechts had been bidding to emulate their run to the 2013 final as they saw off Singapore in a Doubles decider at the quarter-final stage. That win over Singapore included younger brother Kim's stunning 121.97 average as he overcame Paul Lim 4-1 in the opening Singles tie of the day, recording the second highest televised average in history.

Host nation Germany took the Netherlands to a Doubles decider, with youngster Martin Schindler having led 2-0 before losing to Van Gerwen before Max Hopp overcame Van Barneveld 4-3, only for the Dutch to prevail 4-1 after pairing up once more. 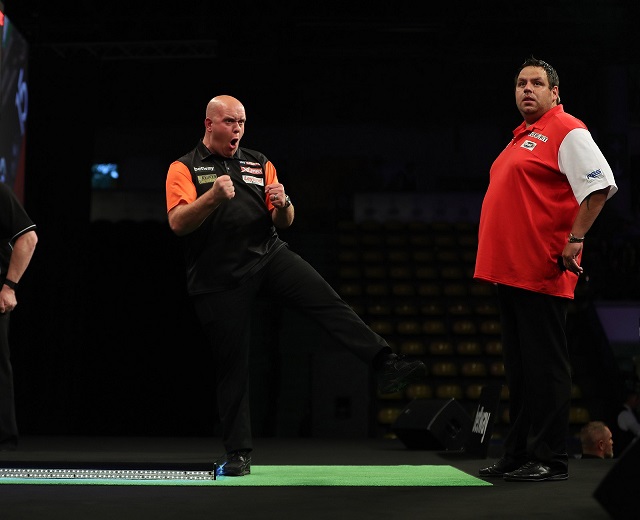 Austria took England to a Doubles decider after Mensur Suljovic whitewashed Lewis in their opener, landing a 170 finish in the process, with Chisnall then seeing off Rowby-John Rodriguez 4-1 before the reigning champions edged through. However, Lewis was made to pay for missing the bull to defeat Van Gerwen in their semi-final, before Van Barneveld's 4-2 defeat of Chisnall ended England's bid to win a fifth World Cup.