MICHAEL VAN GERWEN and Peter Wright qualified for the Betway Premier League Play-Offs at The Barclaycard Arena in Birmingham on Thursday, as Gary Anderson claimed a key win over Raymond van Barneveld. 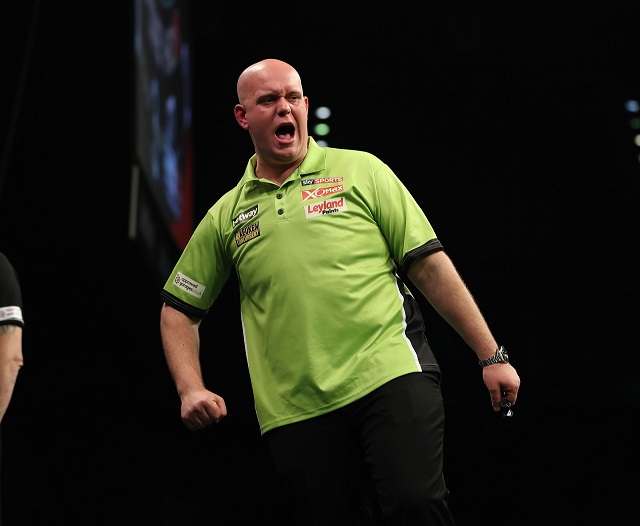 Reigning Premier League champion Van Gerwen followed up a draw with Dave Chisnall with a whitewash over Adrian Lewis to continue his challenge to claim a third title in the event. The Dutchman now sits three points clear of Wright in the bid to claim the 25,000 pound League Winner's Bonus with two weeks of the regular season remaining.
Van Gerwen's opening game of his double-header saw him come from 6-3 down to deny Dave Chisnall a third straight victory as he Englishman paid the price for missing three match darts. Van Gerwen took out 84 and 87 to share the opening four legs, but Chisnall took the next three to pull clear and landed double one in leg nine to secure at least a point. Double eight kept Van Gerwen in the game before he capitalised on three misses at double 18 from Chisnall in the next to force a deciding leg, which saw the Dutchman fire in a 180 before finishing double four for a 13-darter to share the spoils.
The World Champion later returned to the stage to complete only the eighth whitewash in the history of the Premier League, averaging almost 111 in a sensational 7-0 rout of Adrian Lewis. Van Gerwen hit 180s in each of the first three legs as he pulled clear of Lewis, whose missed doubles in the next two legs allowed the Dutchman to consolidate his advantage at 5-0. The league leader then took out a pair of 14-darters to complete the whitewash, securing his place in the semi-finals next month and moving himself a step closer to the League Winner's Bonus.

"It's been a good evening for me," said a happy Van Gerwen. "To go home with three points is good and I think I made a great night of it at the end with the win over Adrian. "It was a fantastic performance and I played phenomenal against Adrian - I came alive and everything clicked. "The first step is getting into the Play-Offs and the biggest step is at The O2, and I want to keep this going now. I'm feeling good and I'm playing really well." 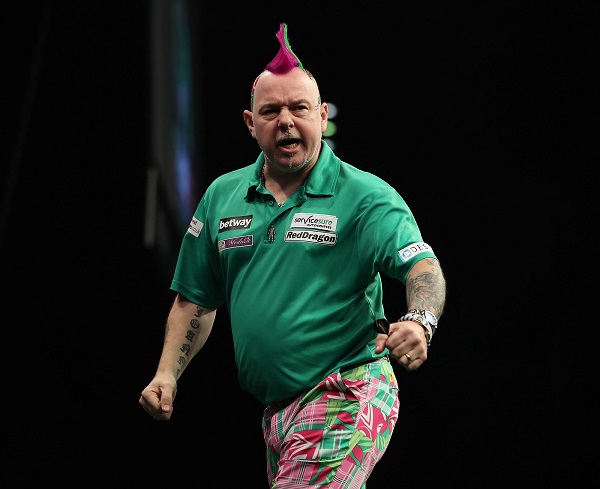 The night in Birmingham also saw Wright secure his Play-Off place by defeating Phil Taylor 7-3 win - leaving the six-time champion clinging on to his own top-four spot.
Taylor followed up 180s in the opening two legs with a 93 finish in the third to lead 2-1, but Wright levelled and then took out clinical checkouts of 104, 116 and 96 in successive legs to move 5-2 up. Taylor shared the next two, but a missed bull in the tenth leg allowed Wright to take out 78 to secure a precious two points.

"The plan was just to try and win my game tonight, regardless of what happens with qualifying," said Wright. "I wasn't great but I didn't play as well as I wanted to tonight but I got the win. "My finishing was good but I wasn't really happy with my scoring, but it's always hard to beat Phil so I'm pleased with that. "It's amazing where I've come to, I used to be 5/1 against Phil and I was odds-on today, but it's down to the hard work I've done. "I want to win my last two games and push for that top spot and challenge Michael, and then try and win the final at The O2. I want to push Michael and I'm not happy being second to him, I want to beat him." 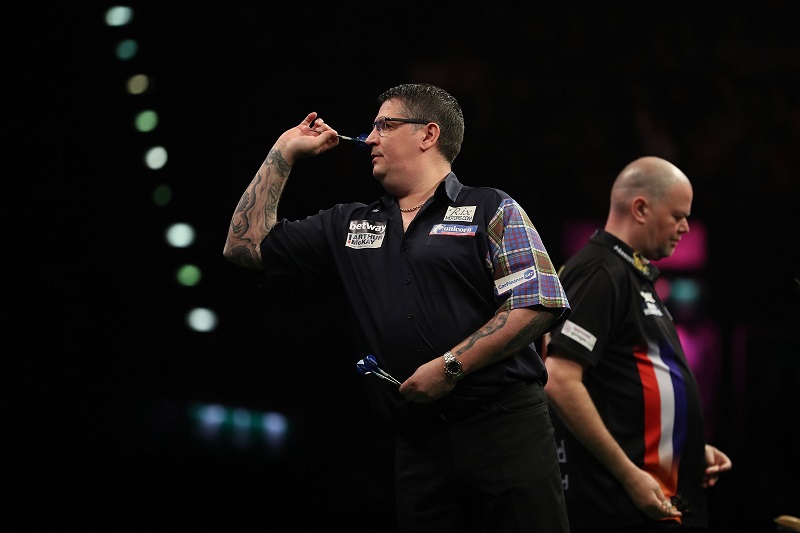 Gary Anderson gained a key victory in his bid to secure a top-four finish and challenge for a third Premier League title as he overcame Raymond van Barneveld 7-4.
After starting with a 13-darter, Anderson moved into leads of 3-0 and 4-1 - the latter aided by a 161 checkout - only to see Van Barneveld hit back to level with three in a row of his own. Three misses from the Dutchman in leg nine, though, allowed Anderson to land double eight to regain the lead before he took out the next two to move into third spot in the table.

"It's two points and I'm always happy to get the win," said Anderson. "It could have been a better performance but I hit the important doubles in the end. "I got well in front against Phil last week and then fell asleep and I nearly did it again, so I need to finish people off when I get ahead like that - but I got the job done in the end." 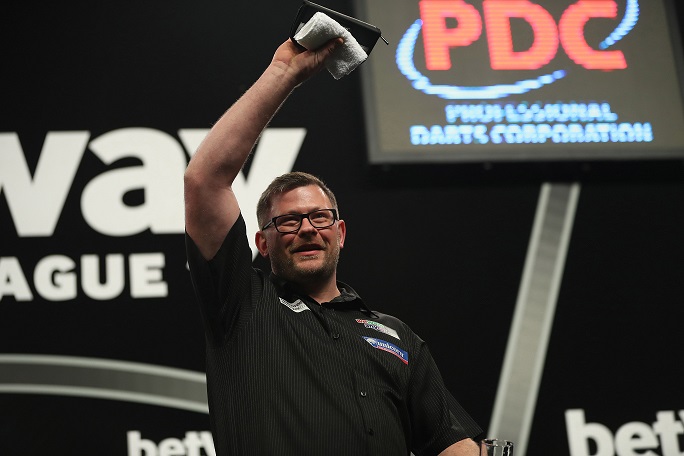 James Wade kept alive his feint Play-Off hopes with a 7-4 win over Lewis in the night's opening fixture, although the 2009 champion sits three points adrift of the top four with two games remaining.
Although Lewis led in the opening leg, Wade hit back with finishes of 70, 66 and 100 as he led 4-3, with the Stoke ace levelling in the eighth but missing doubles in the next two legs as the left-hander pulled away for the win. 
"I played okay and did enough to win, and that's what I strive to do," said Wade. "Adrian was below par tonight. "It's two more points and it's a shame I didn't do this a few weeks ago. I've played poorly but I'm still enjoying it. This will be too little, too late, but hopefully I can do myself justice in the next two games. "In my eyes, it's not possible for me to qualify - I might have left it too late but I can spoil it for the other players who need the points." 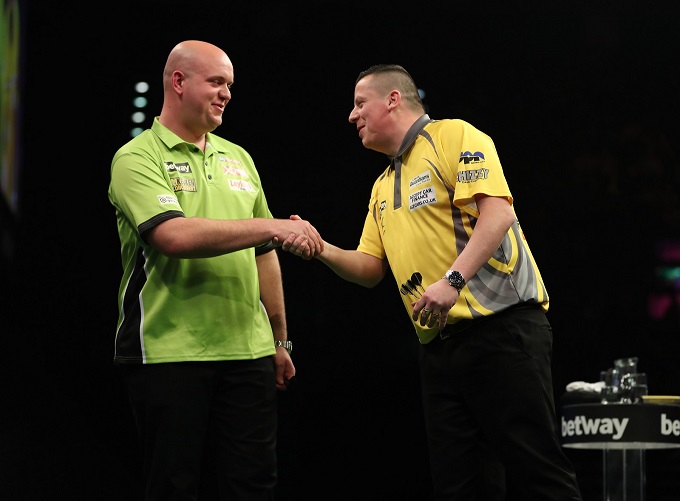 Chisnall's draw with Van Gerwen extended his unbeaten run to five matches, although it was the third time that the former semi-finalist had squandered match darts during that run. However, he sits just two points behind Taylor going into the season's final fortnight, as he bids to claim a second semi-final spot.

"It's a point lost," admitted Chisnall. "I had shots to win the match and I'm really disappointed, but it's not a defeat. "I had the chance at the 36 and didn't take it, and Michael did what he does and came back. I had some chances early on that I took, but you have to hit your doubles against Michael. "I've got to win my next two matches and see if the results go for me, because it's very close. I'm still in it and I've not lost in five games now, and I still think I can get through to The O2."