MICHAEL VAN GERWEN bounced back to winning ways in the Betway Premier League with a 170 finish as he thumped Peter Wright 7-3 in Nottingham on Thursday, as Gary Anderson, Phil Taylor, James Wade and Raymond van Barneveld remained unbeaten. 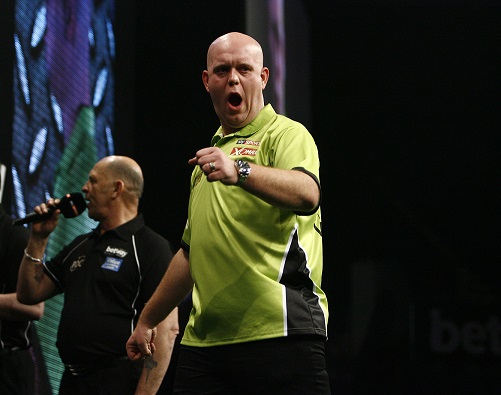 Reigning Premier League champion Van Gerwen had drawn with Anderson on the opening night in Newcastle a week ago to see his winning run on TV - which stretches back to last October - ended. However, the world number one showed his class with a brilliant response in front of 7,000 fans at the Motorpoint Arena, coming agonisingly close to only the eighth whitewash in Premier League history.
Despite Wright starting their match with a 180, four missed doubles allowed Van Gerwen in to win the opening leg before the Dutchman finished an 11-darter in leg two and a stunning 170 checkout in the fourth. He also took the next two to lead 6-0 before seeing three darts to secure a whitewash victory miss their intended target, as Wright finished 64 for his first leg and also took the next two to threaten an unlikely fightback. Van Gerwen, though, was in no mood to allow Wright to claim a draw, landing two 180s in the tenth leg before sealing victory with a 14-dart finish, ending the contest with a 105.21 average.

"I think I played okay there - I could have won 7-0 , maybe I was trying too hard but I don't think I deserved to win 7-0," said Van Gerwen. "As long as you win and get the two points, that's the most important thing. There's more in the tank to come and I will be prepared for the other players as well, because you have to perform week after week." 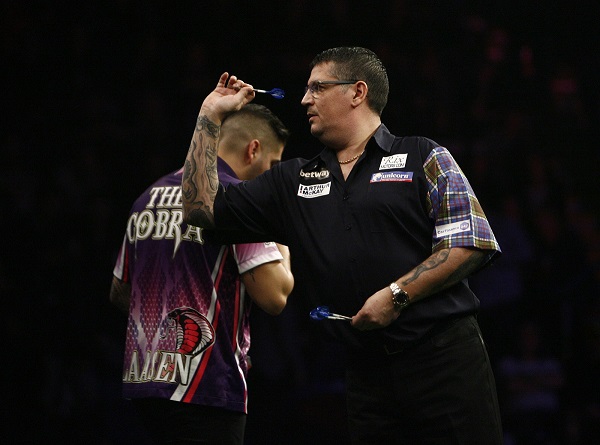 World number two Anderson also picked up his first win of the season to move onto three points in the league table, powering past Jelle Klaasen with a 7-3 win.
Klaasen opened with a 180 and took out 80 for the opening leg, but Anderson's 119 checkout levelled before he pulled clear to lead 3-1 and 6-2. A 122 finish saw Klaasen hit back, but he missed his chance to stay in the game in the tenth leg as the two-time Premier League champion returned on double two to seal the win.

"I played well against Michael last week but I didn't think it was as good tonight, so it's nice to get the two points and I'll take that," said Anderson. It's going alright so far but it's always hard and every point is important." 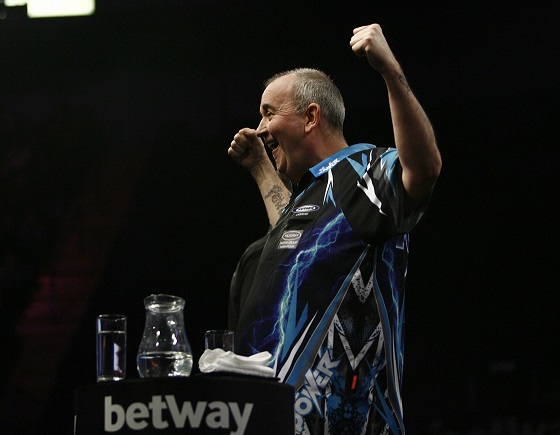 Phil Taylor and James Wade battled out an entertaining draw in a game which featured four ton-plus finishes and a quartet of 180s from the 2009 champion as both players remained unbeaten.
An early 121 finish from Wade moved him into a 2-0 lead before Taylor matched the checkout to respond and then took out 104 to level at three-all. Wade followed two maximums with tops finishes as he led 4-3 and 5-4, only for Taylor to level in leg ten with double 19 and then fire in a sensational 142 combination to lead 6-5. Wade, though, would not be denied as he took out 56 on tops in the decider to claim his share of the points.

"I'm happy with the point," said Taylor, a six-time Premier League winner. "It's a shame that I didn't win but the result was fair and it was about even. I thought I'd got him when the 142 went in, but James hit the right shot at the right time in the last leg. He hit a few 180s and he pulled it out at the end, but I'm enjoying it." 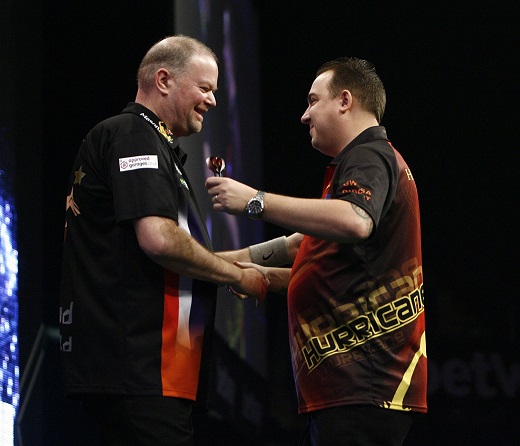 2014 Premier League champion Van Barneveld became a fifth player to move onto three points as he followed up his opening-night win with a draw against Kim Huybrechts, who claimed his first point of the season.
A see-saw game saw Huybrechts' early 3-1 lead wiped out as Van Barneveld moved 4-3 up, with the Belgian then taking out 79 to move back in front and double four to claim a point at 6-5. Van Barneveld, though, showed his quality with a seventh 180 of the contest in the deciding leg before finishing 80 to share the spoils. 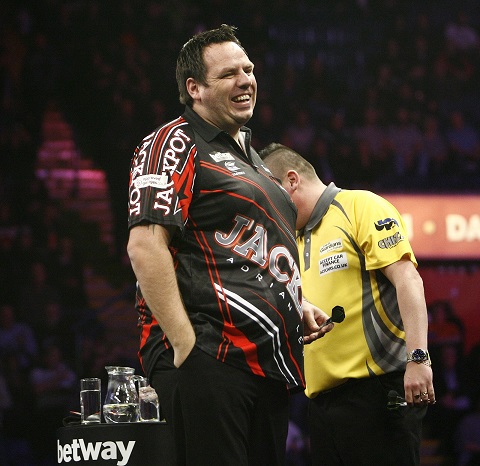 Adrian Lewis claimed his first victory of the season as he swept past Dave Chisnall 7-2, leaving the St Helens ace without a point following two weeks. Finishes of 81 and 76 helped Lewis into an early 3-1 lead before he took out a brilliant 160 checkout to move five legs clear, and he then took out 86 to complete a big win.

"It was quite a big two points and you need all the points you can get in this league," said Lewis. "Last week I missed three darts to get a draw with Barney and I didn't take my chance, but tonight I put it right. I wasn't too happy with my performance and I'd rather play well and win, but I got the job done. The crowd have paid their money and want to see good darts, and when I don't perform to my capabilities I'm just as upset as them."