PETER WRIGHT recorded the second highest televised average in history as he joined Phil Taylor at the top of the Betway Premier League table with a thrilling 7-2 defeat of Adrian Lewis in Exeter on Thursday. 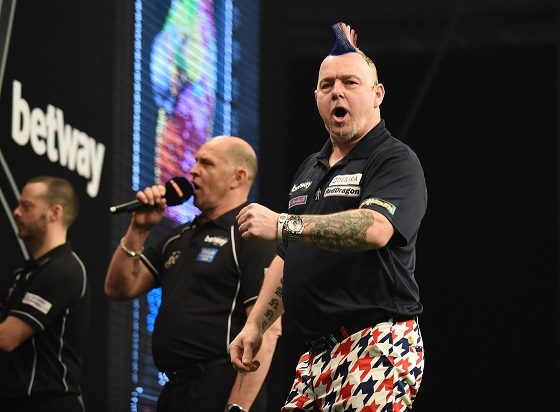 In the absence of reigning champion Michael van Gerwen with a back injury, Wright produced a performance which was second-only to the Dutchman's 123.40 record of last year in a sensational display at the Westpoint Arena.
Lewis opened his clash with Wright with two 180s in seven perfect darts - but after missing out on a nine-darter saw the Scot take the opening leg with the aid of a pair of maximums of his own to set the tone for the game. Lewis levelled with a fine 12-darter and also landed an 11-dart finish in leg five to stay in touch at 3-2, but Wright landed a 180 to regain his two-leg cushion with an 11-darter of his own before finishing 125 for a 5-2 lead. Another 11-darter moved the world number three further ahead before he landed tops to end a brilliant victory with a 119.50 average.

"I'm so happy just to get the two points but to play so well is brilliant," said Wright. "Adrian's fantastic and he played brilliantly last week against Michael van Gerwen and hit a nine-darter at the weekend so I knew it would be tough. Adrian started off brilliantly with the two 180s and I just felt like following him, and they were going in. That first leg set the pace and I got control of the match, but it felt like a magnet was pulling the darts into the treble! I saw my average at 117 on the big screen and I wanted to get it higher but I think there's loads of improvement to come. Michael van Gerwen's the man to beat, he's immense and it's an honour to be chasing him at the moment." 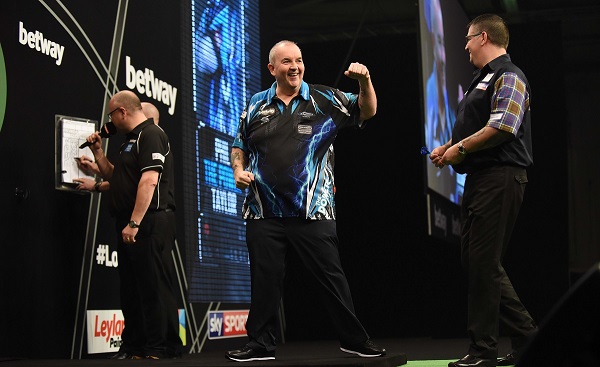 Taylor hit back from 6-4 down to maintain his unbeaten record with a draw against Gary Anderson, who was left to rue one missed match dart as he picked up a fifth point of the season.
The lead changed hands four times in the opening eight legs as Taylor led 1-0 and 3-2 and the Scot took advantages of 2-1 and 5-3, with Anderson also hitting five 180s in as many legs as well as key finishes of 86 and 76. Anderson also took out 83 to move 6-4 up and secure a point, but missed tops for a 116 finish as Taylor scrambled home double five to force a deciding leg before preceding his rival's 180 with a 177 to set up double 16 as he snatched the draw.

"I loved every minute of the game and I'm pleased with the draw, but in the back of my mind I think I should have won," said Taylor. "Gary hit the right shots at the right time, the 180s and the finishes. "At 6-4 down I relaxed and wanted to enjoy it, and I'm happy. It's another point and I'm a little bit closer to getting into the Play-Offs."

Anderson admitted: "The point's good and it's definitely better than nothing. That was typical of Phil to hit the 177 to leave 32 at the end, and if you give him a chance he'll pop it out." 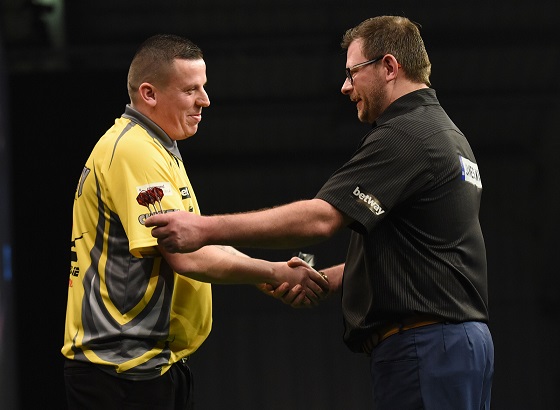 The night in Exeter proved profitable for Dave Chisnall, who competed twice in the absence of Van Gerwen and claimed victories over Raymond van Barneveld and James Wade.
Chisnall firstly enjoyed a fine 7-2 win over Raymond van Barneveld, averaging over 101 as he claimed his second victory of the season. Chisnall capitalised on missed doubles from Van Barneveld in two of the opening three legs as he moved into a 3-0 lead, with the Dutchman winning two of the next three to fire his challenge at 4-2. Chisnall, though, punished two further misses from the 2014 champion as he moved 5-2 up, sealed a point with a 96 checkout and then landed two 180s and tops to secure the victory.
He then returned to the stage in the night's final game to inflict Wade's first defeat of the season with a narrow 7-5 triumph as the left-hander missed tops for a 160 finish in the deciding leg to grab a draw. Wade, who opened with a 96 finish, had hit back from 3-1 down to level at four-all and then led 5-4, only to be punished for missed doubles as Chisnall took the next three to complete a memorable night's work. 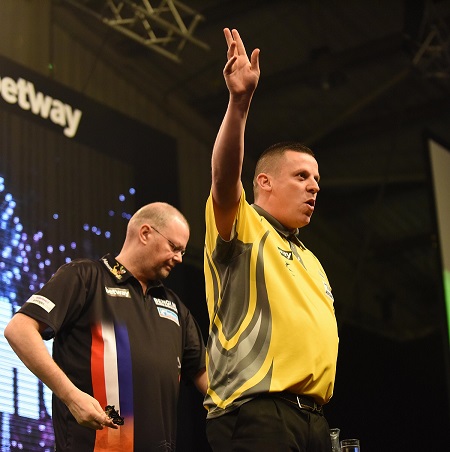 "It's nice to get two wins and it's special," said Chisnall. "Playing two games in a night is always going to be hard, but when I got told on Wednesday I made sure I got ready for it, and I'm happy to get the four points. In the first game I played well but maybe I was a little bit lucky in the last game, James missed a lot of doubles but I got the win." 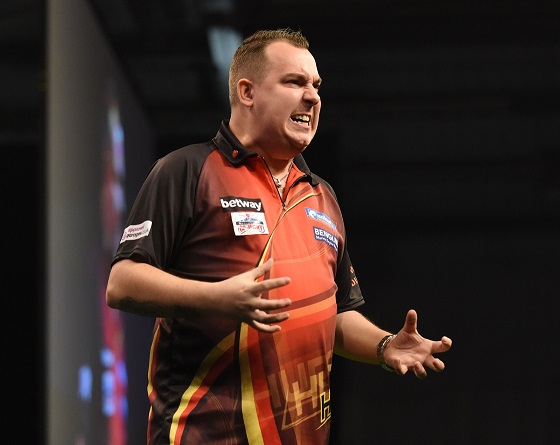 Kim Huybrechts battled from 6-3 down to claim his third draw of the season with a stalemate against Jelle Klaasen, who remains locked on three points with the Belgian in the basement battle. Klaasen came from a leg down to lead 2-1, and 3-2 before taking three successive legs - punishing eight missed doubles from Huybrechts in the process - as he moved into a 6-3 advantage to secure a point. However, the Dutch ace missed four match darts at double seven in leg 11 as Huybrechts forced a decider, which he claimed with a superb 12-darter as he followed three 140s with an 81 finish.