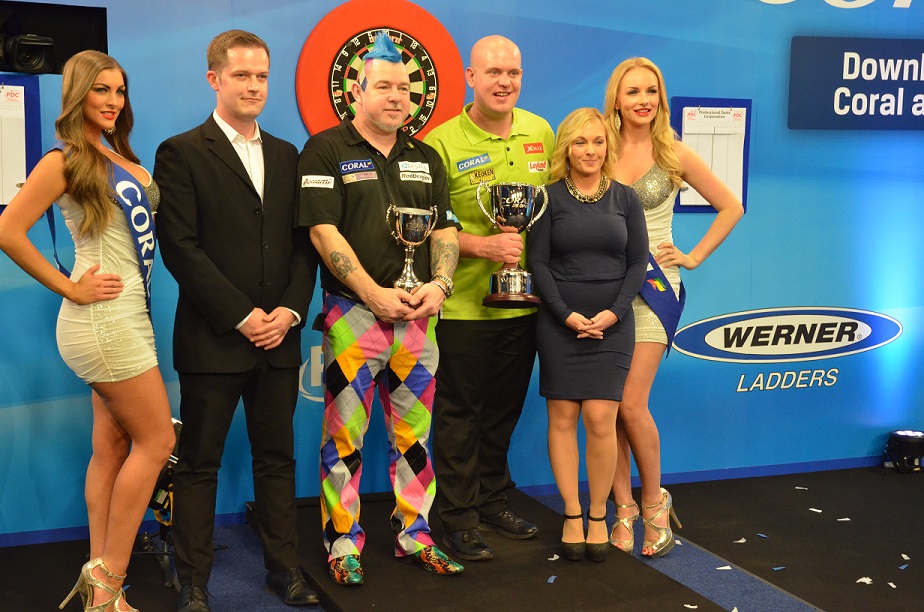 The UK Open 2017 will be the first UK Open which will take place without Phil Taylor - a strange feeling but something we'll have to get used to. Might be it will be a tournament without reigning champion Michael van Gerwen as well should he not be able to get rid of his back injury. And should he be able to get rid of it might be he will not be in top form. Mensur Suljovic will miss the tournament as well - due to familiarly reasons he couldn't take part in the qualifiers. And it will be an event without a German participant - something I can't remember happening since I first was live at an UK Open. 2013 there even were three Germany taking part -it was the year Maik Langendorf somehow managed to qualify by the amateur qualifiers and join Tomas Seyler and Bernd Roith. So all German speaking hopes are pinned on Austrian Zoran Lerchbacher who played quite well during the qualifiers. But it will be his first UK Open - we shouldn't raise our expectations too high - this tournament follows its own rules and it is not easy for debutants. Lerchbacher has to play his first match on one of the smaller boards - which is similar to the floor tournaments only there will be big crowds watching the action. His first opponent will be one of the young English upcoming players -Matthew Dennant - who till now was far less successful on the Pro Tour then Lerchbacher despite he's regularly practicing with Chris Mason.

It would have been Taylor's 14. UK Open - that means it will be the first one he will miss out in all the years the tournament already exists. But six other players will be in Minehead taking part for the 14. time - leading the way will be James Wade who won the tournament twice. Then we have Terry Jenkins who's ending his career but couldn't help taking part in one of the qualifying weekends, Steve Beaton, Wayne Jones, Kevin Painter and Alex Roy.

Should Michael van Gerwen be able to play he to be sure will be the favourite to win it again. Should he not be able to play the outcome is completely open. When I look at the top players taking part in Premier League I have to say till now no one really consistently convinced me. From the top three in the table only James Wade till now played the most consistent season - might be he'll get another chance to win this event. Peter Wright showed a great performance last week. Gary Anderson played brilliantly last weekend on the Pro Tour and won one of the Players Championships. Both could be possible tournament winners though Wright definitely has more experience in losing finals then in winning them. Raymond van Barneveld was won of the tournament winners but his form is not good enough at the moment to win the event. Adrian Lewis form seems to change from match to match - certainly precondition to win a tournament. And I just can't imagine Dave Chisnall, Jelle Klaasen or Kim Huybrechts will be the UK Open champion. It really can happen this year will see an underdog in the final like 2008 American Gary Mawson