Paul Hogan continued his dream run at the Coral UK Open with a superb 10-6 win over former champion Adrian Lewis in Saturday afternoon's fourth round. 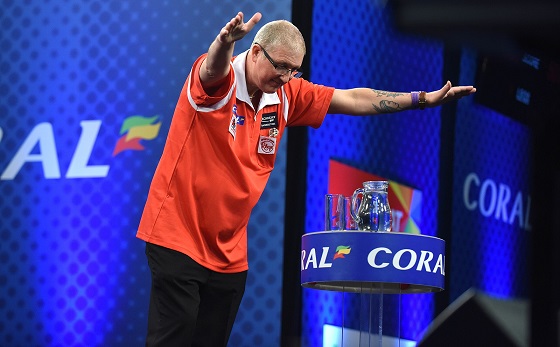 The Rileys Amateur Qualifier from Basingstoke had knocked out world number two Gary Anderson on Friday night, and won his fourth game of the tournament with a brilliant display against Lewis. Hogan took out 161 and 116 as he opened up a 4-0 lead, with Lewis taking out an 11-dart finish as he got off the mark before pulling back to 6-3 and 8-6. Hogan, though, produced a huge 160 finish to move 9-6 up and sealed victory on double 18 to claim another illustrious scalp.

Hogan will be the only Rileys Amateur Qualifier in the last 16 on Saturday night, but he joins company including two-time champion Raymond van Barneveld, who impressed with a 104 average and a 161 finish in a 10-3 win over Ron Meulenkamp. 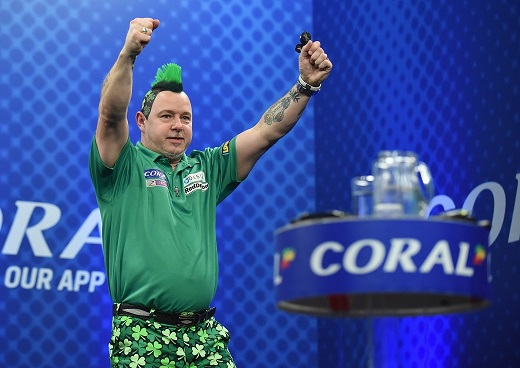 World number three Peter Wright - the 15/8 tournament favourite with sponsors Coral - saw off top-ten rival Dave Chisnall 10-5 with another strong performance as he continues his bid for a first televised title.
2007 finalist Vincent van der Voort came from 4-0 down to defeat compatriot Jelle Klaasen in a deciding leg, with the Premier League ace missing tops for the match before his rival took out 106 to snatch victory. 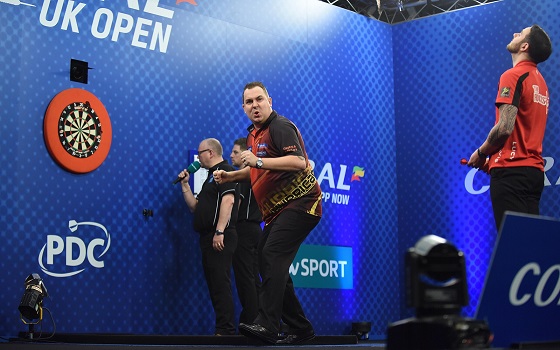 Kim Huybrechts was in sensational form with a 110 average as he overcame teenage talent Ted Evetts 10-1 in the afternoon's heaviest win, while Daryl Gurney finished 167, 117 and 106 on his way to a 10-3 defeat of Mark Webster.
Gerwyn Price is the only Welshman in the last 16 following his 10-4 defeat of David Pallett, while Ireland's William O'Connor saw off veteran Ronnie Baxter 10-6 to reach the fifth round for the first time.

Joe Cullen, a quarter-finalist last year, was a 10-5 winner against Spanish ace Cristo Reyes, who had received a third round bye on Friday in the absence of reigning champion Michael van Gerwen with a back injury, and Stoke's Ian White sealed a 10-7 win over Kirk Shepherd with a 158 finish.
Australia's Simon Whitlock overcame Dutch youngster Dirk van Duijvenbode 10-6, with 2006 semi-finalist continuing his revival by defeating Greece's John Michael by the same scoreline. 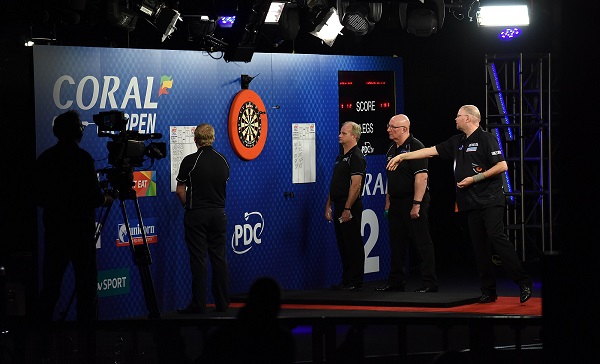 PETER WRIGHT and Raymond van Barneveld will clash in the Coral UK Open quarter-finals on Sunday afternoon after winning through the second day of the multi-board tournament in Minehead.

World number three Wright, the runner-up to Michael van Gerwen in the past two years, continued his bid to capitalise on the Dutchman's absence due to a back injury to claim his first televised title with two wins in Saturday's play.
He firstly saw off Dave Chisnall 10-5 before then overcoming emerging star Rob Cross 10-6 as he secured his place in the last eight. Wright, the 6/4 tournament favourite with sponsors Coral, is aiming to claim his first TV title when the final stages take place at the Butlins Minehead Resort on Sunday, with a £70,000 first prize on offer.

"I didn't feel great against Rob and I struggled but he's a very dangerous player and I got away with the win," said Wright. "I'll have a nice sleep tonight and be nice and fresh for Raymond. I'm happy and it should be a great game against Barney for the crowd." 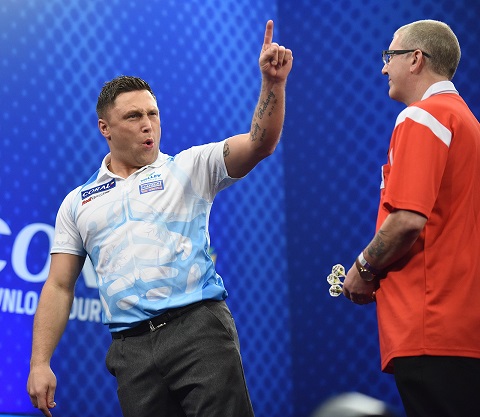 2006 and 2007 champion Van Barneveld followed up his 10-3 win over Ron Meulenkamp in the afternoon session with a battling 10-7 defeat of Alan Tabern.
St Helens left-hander Tabern, a semi-finalist in 2006, had enjoyed a memorable two days as he won four games to reach the last 16, and led Van Barneveld 7-6 during an entertaining contest. However, an 11-darter saw the Dutchman break throw to level before he reeled off the next three legs to seal the win. 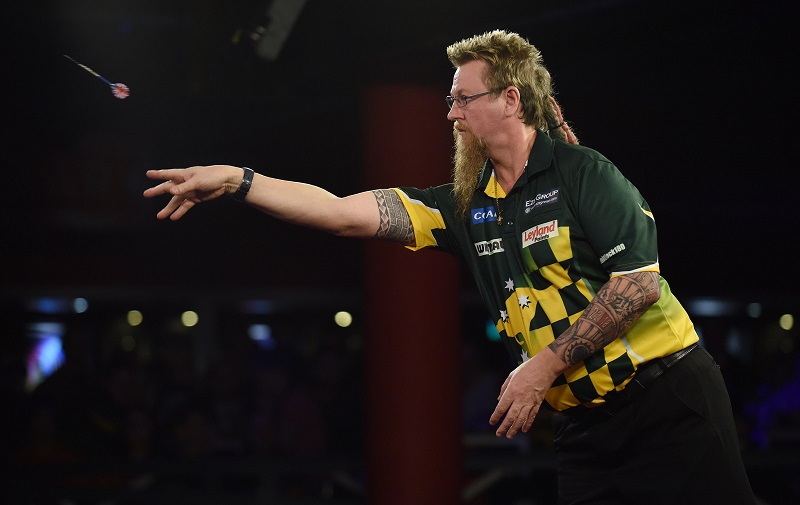 Simon Whitlock continued his bid to claim a second televised title with his 10-7 win over William O'Connor, with a 158 checkout firing his recovery from 2-0 down as he reached his first UK Open quarter-final.
"I'm pretty happy," said Whitlock. "I haven't played my best yet but I'll be ready for tomorrow. I'm not being talked about, I've been winning tournaments again and I feel a little underdone by people. I'm coming back from a long spell of disappointing darts from myself, I've worked hard for the last two years and I'm playing better than I've ever played to be honest. I believe I'm going to win this tournament, I'm feeling good and I've nothing to lose." 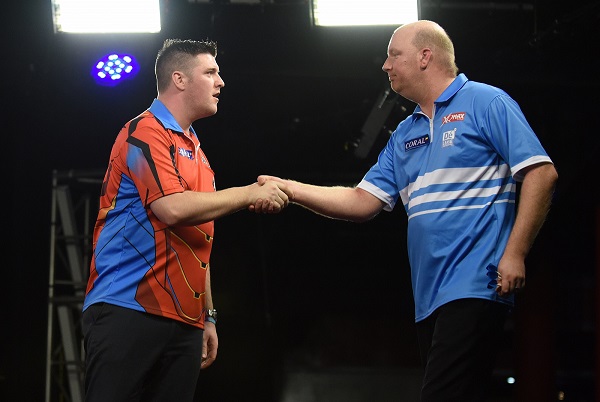 Whitlock now plays Daryl Gurney, who won through to his third televised ranking event quarter-final in the space of six months by seeing off Mark Webster 10-3 and Vincent van der Voort 10-5. The Northern Irish ace had trailed Van der Voort 5-4, but the Dutchman missed four doubles in the tenth leg as Gurney levelled before he pulled clear to win the next five for the victory.
"I always have cracking games with Simon," said Gurney. "We always seem to find one another in the draw and hopefully it's going to be a cracking game again."

Belgium's Kim Huybrechts won through to his first UK Open quarter-final in a dramatic 19-leg thriller against Joe Cullen, who missed one match dart at double 18 in the decider. Checkouts of 140 and 160 from Cullen were bettered by five ton-plus finishes from Huybrechts - of 130, 167, 126, 100 and 100 - before he recovered from a slip in the final leg to land double ten for the narrowest of wins.

"Joe had some good finishes, especially at the beginning, and I had to dig deep to win the game," said Huybrechts. "The 140 and 160 set the tone for the game so I'm very relieved that I've won. As long as you're in the tournament you've got a chance, so I'll see what happens tomorrow and everyone's got a chance now." 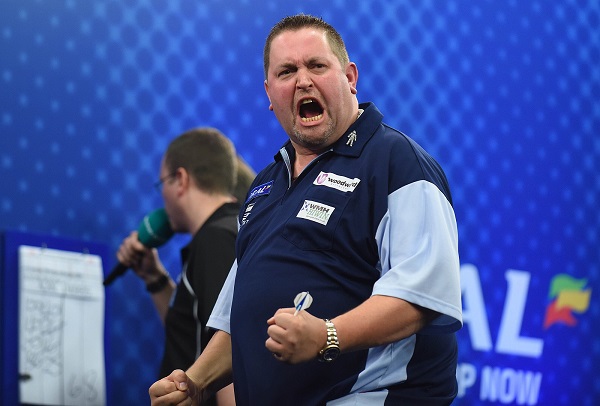 Huybrechts will take on Alan Norris in the quarter-finals, with the Somerset-born thrower defeating young talents Michael Smith and Benito van de Pas to continue his best UK Open run.
Ian White moved through to his second UK Open quarter-final in the space of four years with a 10-3 win over Watford's Martin Lukeman, who was appearing in the last 16 on his debut in the event. White, though, showed his experience by racing into a 7-0 lead, landing finishes of 104, 101 and 109, and though Lukeman took out 106 to respond, the Stoke ace checked out 160 as he moved into the last eight.
White will meet Gerwyn Price in the last eight, with the Welshman following up his fourth round win over David Pallett by ending the hopes of the final Rileys Amateur Qualifier Paul Hogan.
Hogan had knocked out former World Champions Gary Anderson and Adrian Lewis in his brilliant run to the last 16, but was outplayed as Price won through to his second televised quarter-final.

The Coral UK Open concludes on Sunday, with the quarter-finals in the afternoon session and the semi-finals and final in the evening session.
Wright is the 6/4 favourite with Coral, with Van Barneveld the 7/2 second favourite as he bids for his third title, Whitlock rated at 7/1 to win his second TV tournament and Huybrechts 9/1 as he aims for a maiden televised title. Gurney and Norris are both rated at 12/1, with White 14/1 and Price the 16/1 outsider as that quartet also look to pick up their first televised triumphs.