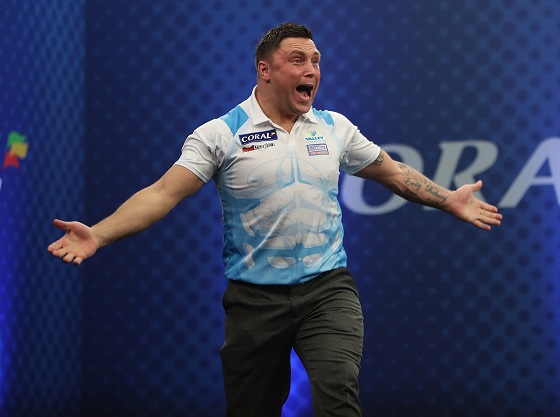 GERWYN PRICE produced the greatest shot of his career to date as he won through to his first televised semi-final at the Coral UK Open alongside Alan Norris, Daryl Gurney and outstanding Peter Wright.

Welsh ace Price, who only started playing professional darts in 2014, continued his emergence to move into to last four of a televised event for the first time.
The 31-year-old had previously reached the 2015 World Matchplay quarter-finals in his breakthrough event, but this narrow 10-9 win over Ian White will live long in the memory following a dramatic finish at the Butlins Minehead Resort. White had hit back from 4-2 and 7-5 down to move 8-7 up with three successive legs, and moved to the brink of victory at 9-8 only to see Price force a decider in leg 18. White landed a timely 180 - his sixth - to leave 20, but dramatically burst his score by hitting double 15, and Price stepped up to take out 160 for a stunning triumph.

"At 9-8 down I wanted to give myself a chance, win my leg and then anything can happen in the in the last leg decider," said Price. "Thankfully he missed and I had one opportunity and took it. For most of the game I was chasing Ian and he probably should have won, but I took the opportunity that arose." 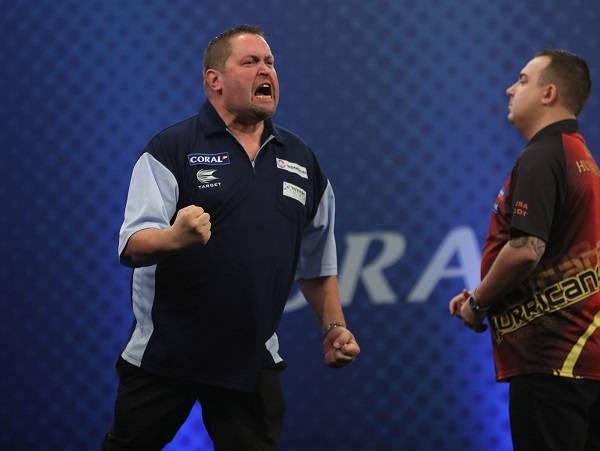 The afternoon's first quarter-final also proved a dramatic affair, with Alan Norris defeating Kim Huybrechts in another tense decider to win through to his first televised PDC semi-final.
Norris twice led by two legs, only to see the Belgian hit back from 8-6 down to lead 9-8 - but Huybrechts missed double 16 for the win as his rival forced a decider. Norris then opened the final leg with two 180s, but Huybrechts clawed back and missed the bull with another match dart, allowing the Yeovil-born thrower back in to take out 60 on tops.

"We've had some battles in the past and this was another great game," said Norris. "You're a bundle of nerves in the final leg but I got there in the end."
Huybrechts said: "It was a close game. Alan let me in a couple of times at the beginning of the game and I did in the end. He's a brilliant played and is doing really well and I think he's got a big chance to win this." 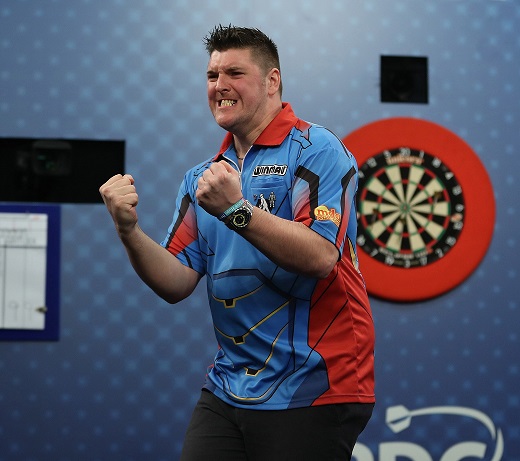 Northern Ireland's Daryl Gurney also won through to just his second TV semi-final in a third 19-leg thriller as he edged out Simon Whitlock.
Whitlock led 2-0, took out 161 on his way to a 5-3 cushion and also moved 7-4 up with a neat two-dart 97 checkout, only for an 11-darter from Gurney - which featured scores of 177 and 168 - to fire his comeback. Gurney claimed the next four legs to move into a 9-7 lead, and though Whitlock hit back to force a decider, the Northern Irish thrower landed his fifth 180 of the game before taking out 81 for a 12-darter to reach the semis.

I threw my heart out after the second break but I had to throw everything at Simon just to get back in the game," said Gurney, who dedicated the win to his best friend Aaron McMenamin, who passed away earlier in 2017. Just to get back in the game was a good effort, but to go on and win it means a lot. Simon's a top player and he's never going to give up, but I wasn't going to give up either. I was 7-4 down and came back at one of the best players in the world." 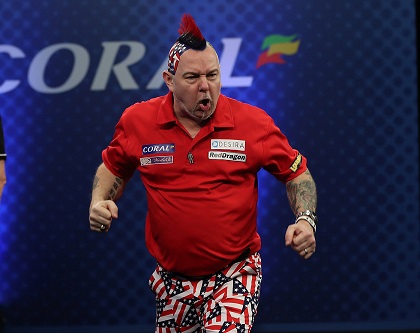 World number three Wright, the UK Open runner-up for the past two years, produced a performance of the highest quality to complete the semi-final line-up with a 10-8 win over Raymond van Barneveld.
Both players set the tone for a superb contest with 180s in the opening leg, and they traded 11-dart finishes during the opening six legs. Wright took out 156 to move 6-4 up, with van Barneveld responding with a ten-darter as he levelled before the two-time champion then edged into an 8-7 lead. Wright, though, produced one final surge to claim the next three legs without reply to seal his semi-final spot, ending with 13 maximums and a brilliant 110.88 average - his second highest on TV - to Van Barneveld's 108.

"That was amazing," said Wright. "It's one of the games I've ever played, and Barney was hitting me back all the time and was with me shot after shot. I was enjoying it as well, even being scared and petrified on stage. I didn't doubt myself, but a couple of years ago I would have buckled. I'm a people-watcher and I watch all these great champions and take little bits from each of them and try to make my game better to try and make me into a champion."

Wright now meets Gurney in the semi-finals on Sunday evening, with Price set to take on Norris in a line-up which will ensure the first new winner of a PDC televised event since 2012 when the 70,000 pound title is secured.