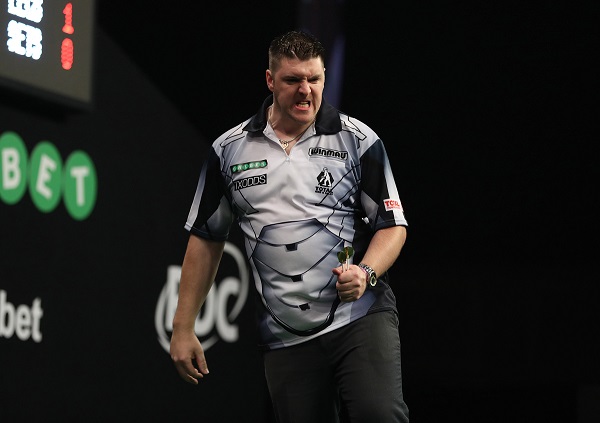 Northern Ireland's Gurney has broken into the world's top 16 this year, aided by runs to the UK Open and World Matchplay semi-finals, and continued his bid to reach a first televised ranking final in a thriller against Thornton. Thornton was the only former World Grand Prix champion remaining in the field as the double-start tournament reached the last eight stage, and produced a typically gritty display in his bid to win back the title. However, it was Gurney who emerged victorious in a sudden-death leg of their five-set contest to book his place in the last four at the Citywest Hotel against Henderson.

"It's always an epic battle to beat Robert Thornton," said Gurney. "Robert never gives up and every time you play him it seems like it goes to the last leg, but that's just the way he is. "He's a fighter and a great dart player but I'm just glad that I came out on top this time. "As soon as I opened the last leg with 146 I knew it was my game to lose, and I'd have to panic to let him win. If you mess about you get beaten, but I got the job done. "It's so tough now to win a game and it takes everything out of you, so I'm very grateful to get over the finishing line. I'm here to concentrate on my own game and whoever wins tomorrow will deserve to be in the final."

Gurney had to come from a leg down to win the opening set 3-1, taking out a 13-darter in leg four as a superb 177 set up double 12. The Northern Irish ace also led 2-1 in the second, only to see Thornton open leg four with 160 and 180 as he levelled before finishing double five to claim the set in a decider. The 2015 champion also took out a 103 finish in the third set, but Gurney was first to a double in the decider as he took out 70 in a key leg to move 2-1 up in the match. The fourth set also went to a deciding leg, with Gurney finishing 96 in leg two and landing scores of 180 and 177 in the fourth, only for Thornton's third 180 of the game to help set up tops in the decider as he levelled the tie. Gurney fired in a maximum of his own in the fifth set's opener, but three misses at double eight allowed Thornton in to lead with a 116 checkout to break throw. Thornton then missed two darts at tops to win leg two as double 16 levelled for Gurney, who then posted double two to lead 2-1 before seeing the Scot land tops to send the game into a sudden-death leg. Gurney opened the final leg with a 146 score and landed a 140 as he left 58 after 12 darts before pinning tops to emotionally secure his last four spot. 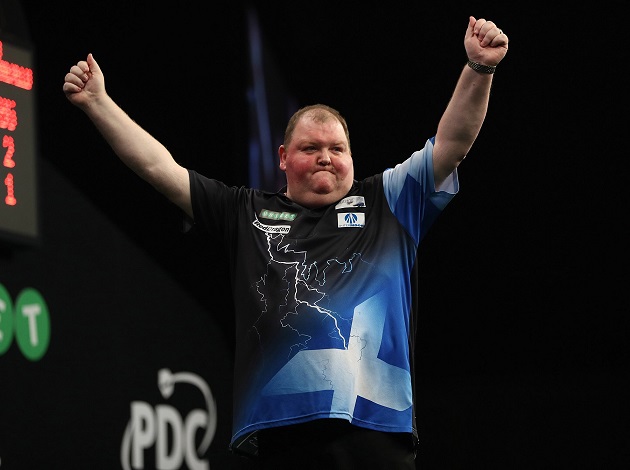 Gurney now meets another Scot, John Henderson, who had begun the tournament by knocking out reigning champion Michael van Gerwen, and followed up his second round defeat of Alan Norris by coming from a set down against two-time finalist Raymond van Barneveld.
After the game's opening two legs were shared, Van Barneveld punished four missed doubles from Henderson to take the third and then finished 94 - to follow up an earlier 98 - as he claimed the set. Henderson then won the second set by the same scoreline, having led 2-0, to level the contest before claiming a see-saw third in stunning fashion. Van Barneveld came from a leg down to lead 2-1 before the Scot forced a decider, but a miss at double 16 from the two-time finalist allowed Henderson in to finish 88 on the bull to move 2-1 up in the game. A brace of double ten finishes moved Henderson two legs up in set four, with double seven and double ten keeping the Dutchman's hopes alive briefly before the Scot fired in tops for the biggest win of his career.

"12 months ago I could never had dreamed about this because I was having problems with my back, but my game's come on and I'm practising well and playing really well," said Henderson. "Getting past Michael was a big shock and now to get past Raymond is another shock, but I just play my own game. "The double-start has helped me this week - Michael, Alan and Raymond have all struggled to get off and I've capitalised, and now I'm in the semi-finals. "I lost the first set against Alan Norris so I knew I could come back, and when Raymond gave me the chances I took them. "Beating Michael was one of the biggest things in my career, and Raymond's another big player but I'm looking forward to the semi-finals. "I want to enjoy it and I hope there's more to come. I know I'm good enough and hopefully I can keep this form up for tomorrow." 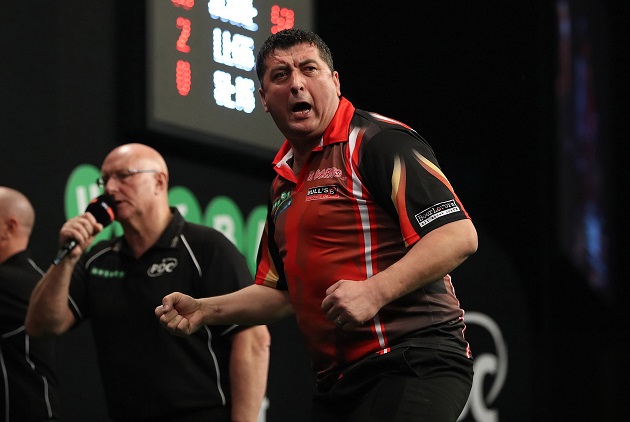 Mensur Suljovic came from a set down to defeat Peter Wright 3-1 as he kept alive his hopes of claiming back-to-back TV titles by reaching the Dublin semi-finals for the second time in three years.
The Austrian - last month's Champions League of Darts winner - took out 122 on the bull in the opening leg and also led 2-0 only to see Wright capitalise on eight missed set darts from Suljovic to claim the lead. Suljovic, though, claimed the second set without reply, taking out 99 with two double tops in leg three, and repeated the scoreline in set three by taking out 48, 97 and a brilliant 135 finish. The number six seed then finished 60 and 56 to move 2-0 up in the fourth set, with Wright taking the next two sets to keep his hopes briefly alive before a stunning 141 checkout sealed Suljovic's semi-final spot.

"I'm delighted," said Suljovic. "I was focused on my game. I wasn't happy after the first set but I came back well. "It would be a dream to win the World Grand Prix. I've got a perfect feeling right now but it's a new day in the semi-finals." 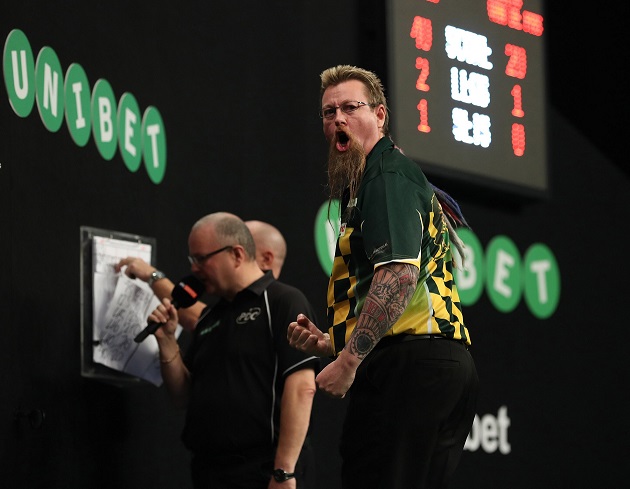 Suljovic now faces a semi-final against Simon Whitlock, who won through to the World Grand Prix semi-finals for the first time with a straight sets romp against Benito van de Pas. Van de Pas had crushed Gerwyn Price 3-0 in their second round tie in an exceptional performance, but suffered the fate himself against Whitlock to exit in the quarter-finals in Dublin for a second successive year.
Whitlock breezed through the first two sets for the loss of only one leg, taking the opener without reply and finishing a spectacular 120 checkout with two bullseyes on his way to the second, as Van de Pas paid for seven missed finishing doubles. The Australian then took out double two and 54 to lead 2-0 in set three, with Van de Pas landing a 180 - his first of the game - and tops in reply only for Whitlock to finish 62 to seal his semi-final spot.

"I felt relaxed today," admitted Whitlock, who will be appearing in his first TV ranking semi-final since the 2014 World Matchplay on Friday night. "I like Benito, we're good friends on the tour but I had a job to do and I won. "I watched his game last night and that probably made me more focused because he played an amazing game and I had to pick my game up, but I won the match and I'm really happy. "I'm in the semis now and we'll see what happens tomorrow - I'll be focused and ready."