DARYL GURNEY claimed his first televised title with glory at the Unibet World Grand Prix as he produced a fine comeback to defeat Simon Whitlock 5-4 in a deciding set in Saturday's final at the Citywest Hotel in Dublin. 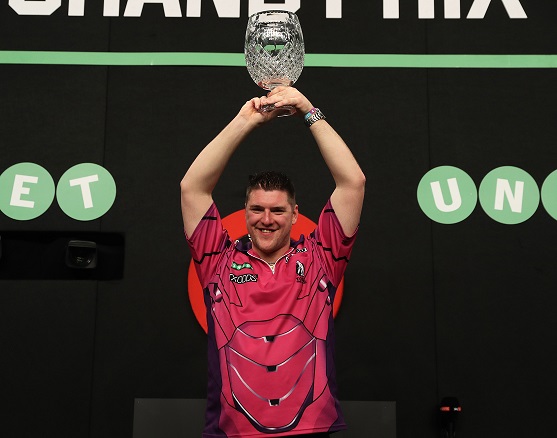 The Northern Irish ace has broken into the world's elite in the last 12 months, and wrote his name into the history books as he claimed the 100,000 pound top prize in the double-start tournament. Whitlock had come from 3-2 down to lead 4-3, but Gurney claimed the final two sets as he emotionally took the title. The Australian edged the opening two sets before Gurney hit back with three in a row to move 3-2 up, landing five ton-plus checkouts as he hit the front. The Northern Irish ace - appearing in his first televised ranking final - crucially missed one dart at a double to win each of the next two sets as Whitlock regained the edge at 4-3. Gurney claimed set eight 3-1 and led in the final set before the pair traded 112 checkouts, but the Northern Irish ace would not be denied as he landed double ten to claim the title before breaking down in tears as he celebrated the win. 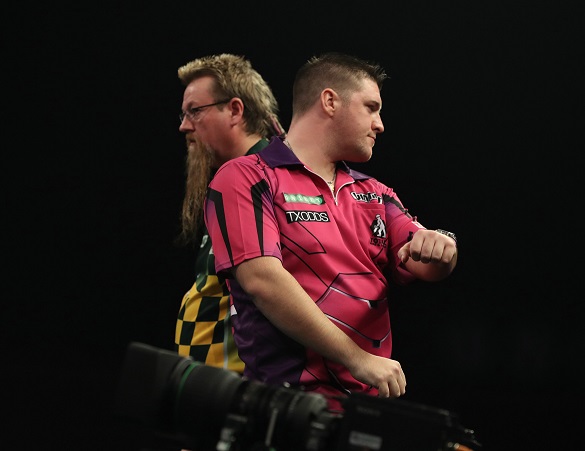 "I'm lost for words - I can't believe it, I really can't," said Gurney, who also moves up to a career-high sixth on the PDC Order of Merit. "It feels better than anything else I've ever felt in my life. Dreams do come true and this is a dream. "I wanted to come up here tonight and play my best game but giving Simon the first set got me more determined. I still had the belief in me that I could come back when I was 2-0 down. "Simon played brilliantly tonight and he may have won against somebody else but I was so determined. He'd played better than me during the week but I knew that I could do better tonight and I wasn't going to give up. "It's an unbelievable feeling. I've done my best in every game and I fought in every single leg all week." 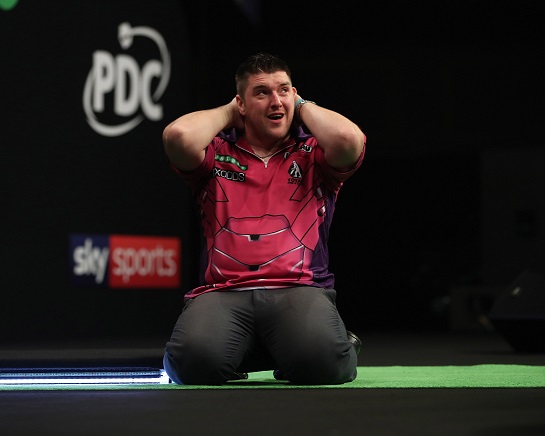 Gurney capitalised on a miss at tops from Whitlock to take out 72 for the opening leg and extended his lead on double 16 before the Australian fired his challenge with a 180 in leg three. Double 16 got Whitlock off the mark, before he capitalised on four missed set darts from Gurney to force a decider, where the Northern Irish ace missed a further five darts for the set to allow his rival to post double one to lead. Whitlock opened set two with scores of 146, 140 and 140 but failed to kill off the leg as Gurney stepped in with a superb 156 checkout to move ahead. The Australian responded with two 180s and double six, with the pair trading the next two before Whitlock claimed the decider with the aid of another maximum and double nine to move two sets up. 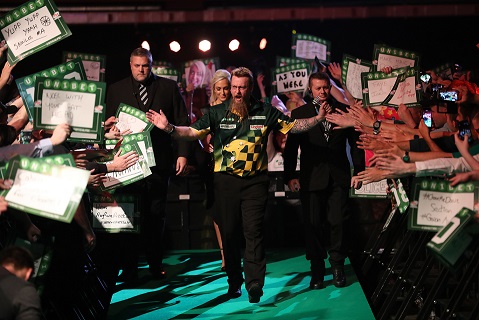 Gurney began set three with another ton-plus finish as he took out 110, with Whitlock levelling on double eight before missing tops for a 120 checkout as the Northern Irishman stepped back in on double 16. Gurney then sealed the set by taking out 126 on the bull to pull back to 2-1 in the contest. He then squared the match by taking the fourth set 3-1, punishing misses from Whitlock in the opening two legs before responding to the Australian's 70 finish by taking out 95 for the set. Whitlock opened the fifth set with a 90 finish, only to see Gurney take out 110 and 104 - taking his tally of ton-plus checkouts to five for the game - to move 2-1 up. Whitlock landed a 180 and double 16 to take the set to a decider, but missed three darts - at double top and ten - to win the set as Gurney returned on double 16 to move 3-2 up by claiming his third successive set.
Whitlock took the opening two legs of set six, but missed double 18 for the set in the third as Gurney took out 100 to respond and double ten to level, only to miss a set dart at double eight to allow his rival in to take out 98 to level the game. The seventh set also went to a decider, with Gurney taking out 77 to lead and double ten to move 2-1 up only to miss the bull for the set as Whitlock landed double ten to level matters. The decisive fifth leg saw Whitlock power in his tenth 180 of the game to edge away before double eight put the Australian back ahead at 4-3 and a set away from glory. Gurney's battling continued as he finished 68 to lead in set eight, and after Whitlock levelled he landed a third-dart double 16 to move 2-1 up the Derry man took out 96 for the set to send the match into a ninth set. Seven missed starting doubles from Whitlock were punished as Gurney took the opening leg on double eight, and the pair traded 112 finishes to leave the Northern Irish ace 2-1 up before double ten finally sealed the title. 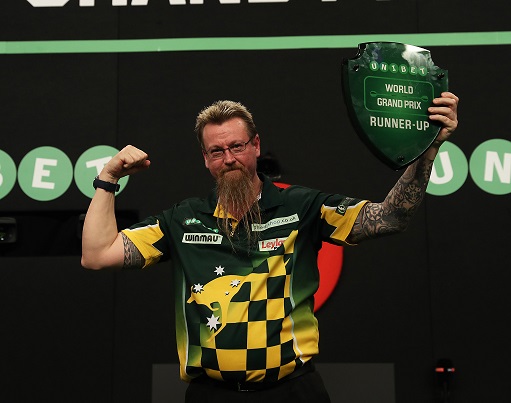 "Daryl deserved to win tonight but I'm really happy to have reached the final," said Whitlock, who landed 13 maximums in the game. "He's been a form player this year and for him to win this is amazing. "It was a great game. I think I had a great tournament and I want to keep getting better and pushing my way up in the rankings. "I'm disappointed I lost, but I've worked so hard for the past two years and especially in the last three months, practising double starts, so I expected good results but I was a bit surprised that I made the final in one respect. "I'm back to winning ways and hopefully the only way is up now. I've got myself back in the Grand Slam, because that was important, and I want to get myself back in the Premier League and in the top five, where I think I belong." 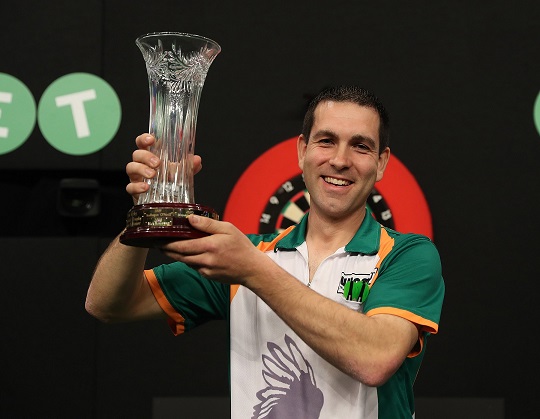 "I'm delighted," said O'Connor. "Jason's a cracking player and I know what he can do. He showed some of his best darts but didn't play his best. "I've had several chances of qualifying and it's been playing on my mind a little bit, hopefully this kills the demons. It's the one tournament I've always wanted to play in and I'll get my chance now. "The longer the format goes the better I will start playing - I need a little bit of time to settle and I can show people what I can do then. I know it's only a matter of time." 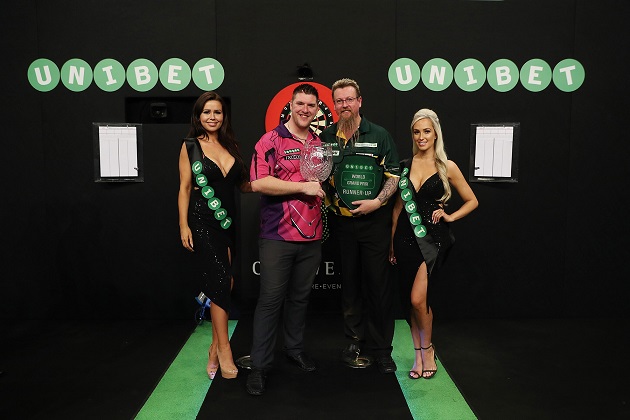