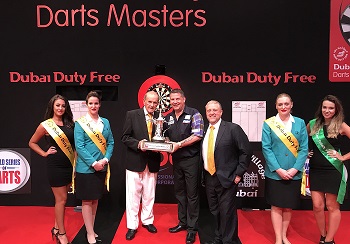 In a repeat of the 2016 decider, Anderson again mastered the desert heat and outdoor conditions at the Dubai Duty Free Tennis Stadium to win the World Series of Darts event for a second year.
Having defeated Peter Wright 11-8 in the semi-finals, Anderson returned to the stage to produce an outstanding display to deny Van Gerwen his fourth Dubai title.
The Scot averaged a huge 110.88, hit 12 maximum 180s and finished 50 percent of his chances at a double, coming from 3-1 and 5-3 down to lead 9-6 with a run of six legs in seven, before closing out victory.

Van Gerwen, who cruised past Gerwyn Price 11-3 in the semi-finals, hit six 180s and also averaged over 110 in the final against Anderson - the first time in a televised knockout games that both players have averaged over 100 - but fell to defeat of a second successive year.

"It's a brilliant win for me," said Anderson, who also overcame Phil Taylor in Wednesday's quarter-finals. "The scoring was great and it just shows what an old boy can still do! "A few years ago against a player like Michael I would have just packed in and given up [when I was behind]. Now I believe I can catch them and get on a roll. "When I retire I can look back at playing the likes of Van Gerwen and Taylor and say that I played them and I beat them."

The final began with the pair hitting seven maximums in the opening five legs of the encounter as Van Gerwen opened up a 3-2 lead. Anderson restored parity in the tenth leg with an 11-dart break of throw, pinning tops for a 41 finish, and back-to-back 12-dart legs moved the Scot in to a 9-6 lead. Van Gerwen responded with an outstanding 11-darter and then set up a possible nine-darter in the 17th leg with scores of 177 and 174 - but after his chance of a perfect leg went wayward, Anderson took out an 11-darter to lead 10-7 before double four sealed the victory.

Anderson had earlier battled his way into the decider with a hard-fought 11-8 win over fellow Scot Peter Wright. The opening five legs saw the pair miss a combined total of 21 darts at doubles but it was Anderson who took advantage, breaking in the fifth leg. The 46-year-old then won four of the next five legs to move in to a 7-3 lead and seemingly close in on the victory. Wright was not done there though, breaking the Anderson throw to close the gap, but he paid for crucially missing six darts to level the match at nine-all before Anderson moved clear to book his spot in the decider.

Van Gerwen had maintained his record of reaching each of the five finals in the Dubai Duty Free Darts Masters with a ruthless 11-3 semi-final defeat of Gerwyn Price. With the match on throw going in to the first break, Van Gerwen then returned to string together four consecutive legs to pull clear of his opponent, with the World Champion's superior finishing proving key as he hit 11 doubles from 18 attempts.