MICHAEL VAN GERWEN was crowned as William Hill World Darts Champion for the second time after winning a breath-taking final against Gary Anderson at London's Alexandra Palace on Monday. 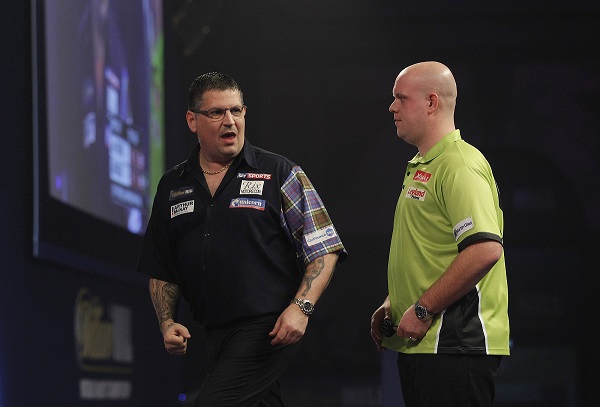 The pair shared 42 180s - a record for maximums hit in any match - in a sensational decider as Van Gerwen picked up his 26th and most prestigious title of the last 12 months with a stunning display, as he triumphed 7-3 to deny Anderson his third straight World Championship glory. The Dutch star followed up his brilliant semi-final win against Raymond van Barneveld, in which he posted the highest ever average in a World Championship match, with another sublime performance, averaging 107.79 to clinch the Sid Waddell Trophy.
Anderson fired in 22 of the game's 180s to break the world record for maximums hit by an individual player but it wasn't enough to stop Van Gerwen claiming the 350,000 pound prize. The Scottish ace missed two darts to take a 3-1 lead before a crucial 86 checkout sparked a blistering run from Van Gerwen, which saw the number one seed take five sets in a row to take control, before going on to seal a memorable success. 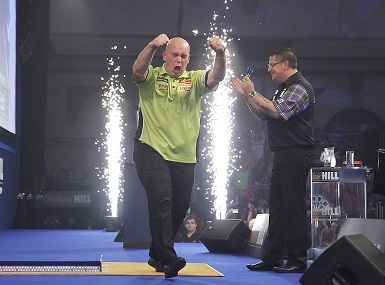 "This feels absolutely phenomenal," said Van Gerwen, who also hit five finishes of over 100 in winning a classic final and ended the £1.65 million tournament with an overall average of 106.96 "I think it was a special game of darts for everyone who saw it. I'm a really happy man because I've worked so hard for this all year. Everyone wants this trophy and I'm really glad that it is me holding it - and to win it against Gary makes it even more special. He is a phenomenal player with a lot of class and I had to play like that to beat him. I've got great support from my wife, family and all the people around me and winning this means a lot to me. Everyone said that I would have to win a second World Championship to be one of the big boys. Well I've done it now and it means everything to me."

The first four sets of the final were shared, with each going to the full five-leg distance, but Anderson's two missed set darts in the fourth set, followed by Van Gerwen's 86 finish in the decider, proved to be pivotal moments in the contest. Van Gerwen took the fifth set 3-0 and the sixth 3-1 as he embarked upon a dominant spell, adding 3-0 and 3-1 wins of sets seven and eight to close in on the title.
Anderson edged the following set 3-2, sealing it with an 81 checkout as the pair overtook the record of 180s scored in a match - which was set in Anderson's final victory over Adrian Lewis last year - but Van Gerwen refused to be denied and finished 85 on the bullseye in the deciding leg of the tenth set to seal glory. 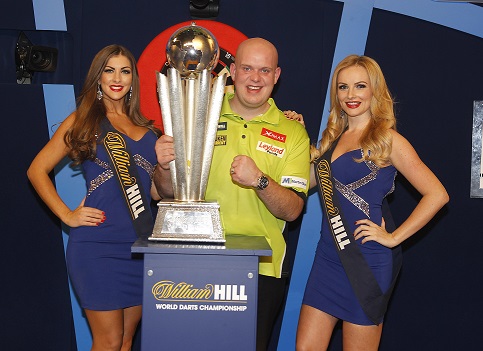 Following two successive World Championship successes, Anderson scooped 160,000 pound as runner-up as the top two seeds contested the tournament finale for the first time since the 2009 decider between Phil Taylor and Van Barneveld.
"Michael deserves it this year," said Anderson, whose tournament 180 tally of 71 maximums was the most ever hit in a World Championship tournament. "The year he has had has been brilliant and if anyone was going to beat me it was going to be him. We've both had a good tournament and it's been a fantastic one for everyone to watch."

The 2017 William Hill World Darts Championship also saw the record for total 180s hit broken comfortable, with 708 maximums being fired in to eclipse the previous best, which was set twelve months ago.
A crowd of 66,000 fans attended at Alexandra Palace, with Sky Sports' coverage being screened across over 100 countries worldwide. 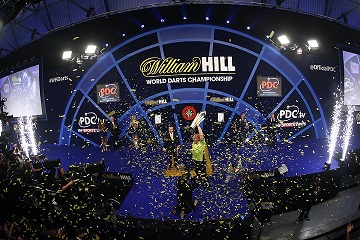