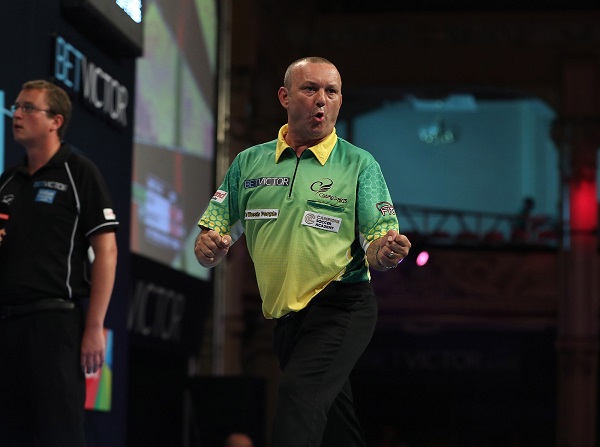 FORMER champion James Wade was knocked out of the BetVictor World Matchplay with a 13-11 tie-break defeat to Darren Webster on Saturday night in Blackpool, as Peter Wright escaped with a narrow comeback win over James Wilson.

Left-hander Wade has enjoyed outstanding success at the Winter Gardens by reaching six finals since his debut in 2006, but suffered a second straight exit in the first round in a thriller with Webster.
Wade looked set to cruise into the last 16 when he opened up a 6-2 lead, but Webster hit back to win five of the next six legs as he levelled, before an 11-darter put the Norfolk ace ahead. Wade then won successive legs to move 9-8 up, but missed three match darts in the next as Webster took out 102 to save the game and force a tie-break before moving himself 10-9 ahead. Three misses at double 19 from Webster in leg 20 allowed Wade to land double ten to keep the tie alive, but after the qualifier won two of the next three, his fifth 180 came at the right time before he posted tops to finally claim victory.

"I'm the happiest man in Blackpool - over the moon!" said Webster. "When I was 6-2 down I had to dig in and I told myself I could do it and I got back into the game. He missed three darts and I took out the 102, and that was a big shot. "James is THE man for winning tight games and I've managed to beat him so it means a lot. I've played well recently and I'll be relaxed now in the next game." 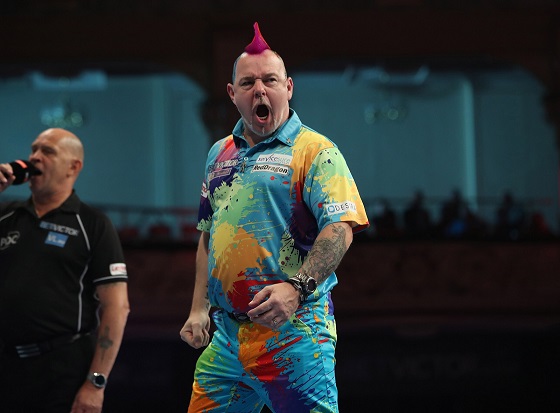 UK Open champion Peter Wright overcame a huge scare against debutant James Wilson before edging to a 10-8 win to avoid joining Wade as a seeded player to exit on the opening night.
Wilson's first three darts on the famous Winter Gardens were a 180 before he landed a pair of double eight finishes and a 12-darter to open up a 3-0 lead. Wright hit back to 3-2, only to see the Huddersfield ace brilliantly land legs of 11 and ten darts to regain a three-leg cushion, and he also led 6-3 and 7-4. After the number three seed responded once more and finished 78 for a break to pull back to 7-6, Wilson took out a superb 127 bullseye checkout to move two legs away from the win. Three misses at doubles in each of the next two legs, though, proved costly as Wright levelled before double eight moved him 9-8 up, and the Scot sealed victory in style by taking out 147.

"I'd have been distraught if I'd lost but I got through it," said Wright. "James was very nervous and I was too, coming here as the number three seed. "I played rubbish in Shanghai and Las Vegas, I brought ten sets of darts with me and I didn't know what darts to use - it feels like I've never thrown a dart in my life before and it's really weird. "I won't be using these darts again and I can go back and prepare for my next match now. I got away with it." 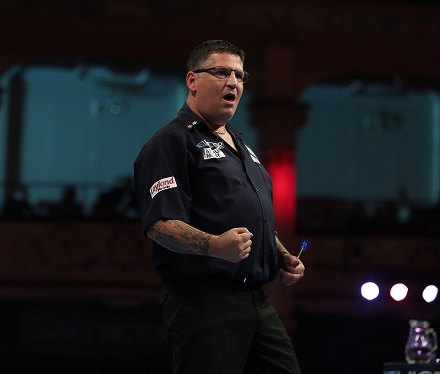 World number two Gary Anderson also avoided a potential upset as he overcame Christian Kist 10-7, with the Dutchman hitting nine 180s on his World Matchplay debut.
After seeing Kist take out 100 with two double tops to win the opening leg, Anderson reeled off the next five and aso led 6-2 before Kist took the next three - hitting four maximums in the process - to cut the gap to one. Anderson steadied any nerves with an 11-darter, and eventually held off Kist's challenge to seal victory with an 88 finish.

"It was a good game and you're always going to get that against Christian," said Anderson. "He's a steady player and once he starts finding his range and his speed he sticks in but I pinched it. It's been hard, we've been on the road a bit and I was lucky at the end." 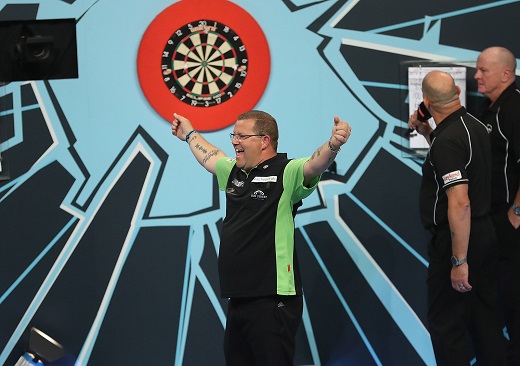 Steve West made a stunning World Matchplay debut with a brilliant 10-5 win over Michael Smith - and revealed he was almost forced to withdraw from the tournament after a car crash this week.
West's form on the PDC circuit this year has earned him a World Matchplay debut, but a car crash near his Essex home on Monday had left the 42-year-old with an eye injury and broken glasses. However, he was able to get replacement glasses and fortunately saw the cut on his eyelid recover in time for him to compete - and he took full advantage with a superb win over the former World Youth Champion.

"I'm over the moon to get the win, especially because I was worried I might not even get here earlier in the week," said West. "My car was hit when someone crossed onto my side of the road and part of the wing mirror caught my eye. I'm lucky the damage wasn't worse and in a way my glasses helped because they saved my eye."

West trailed 3-1 after Smith nailed three doubles from as many attempts in the early stages, before a brilliant 121 finish turned the contest. West then landed an 11-darter to level and reeled off two further 11-dart finishes and a 104 checkout as he moved into an 8-3 advantage with seven successive legs. Smith hit back to win two of the next three with legs of 12 and 14 darts, but three misses were punished as West hit double ten to complete a fine debut win.

"I'm very, very happy with that and it's a brilliant win," said West, whose averaged only just dipped under 100 at the end of a fine performance. "After four legs I must admit that I was a bit worried, but the 121 gave me a lot of confidence. "It's a pretty big win but I've struggled a bit for the last three months, I know I'm good enough and I've never doubted my ability but I wasn't getting the results. "Tonight the darts went for me, and this is going to fill me with confidence."