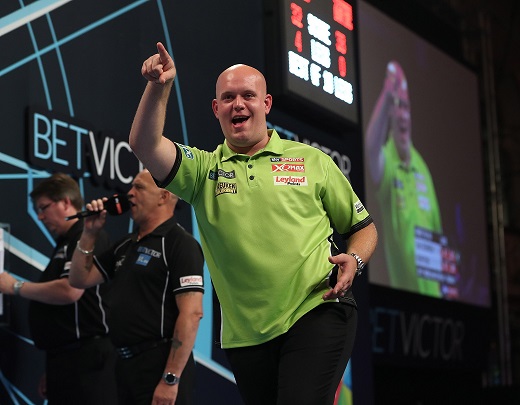 MICHAEL VAN GERWEN eased into the second round of the BetVictor World Matchplay with a 10-4 win over Stephen Bunting on Monday night, as Adrian Lewis, Simon Whitlock and debutant Rob Cross also enjoyed Winter Gardens wins.
Reigning champion Van Gerwen began his bid for a third successive Blackpool triumph in dominant fashion, winning the opening seven legs without reply to take command of the contest.
The Dutchman punished missed doubles from Bunting in three legs and landed back-to-back 13-darters at one stage as he took control, before the former Lakeside Champion took three of the next four to hit back. Van Gerwen, though, moved 9-3 up on double four, and after missing three match darts at double 19 as Bunting claimed a fourth leg, but the world number one sealed the win in style with a 160 checkout.

"It was a bit too easy," admitted Van Gerwen. "Stephen wasn't confident and didn't really play his game to be fair; he missed doubles and I played alright in the first two sessions. "After that I was a bit sloppy but I still won the game and I did the right things at the right moment. I can look forward to the next round against Simon Whitlock now and I'm sure I'm going to play better. "Simon's playing well and had a couple of great wins earlier in the year with a couple of ProTour wins, but I'm the favourite and I hope I can also do the business. "You need to grow in the tournament and my first round is out of the way now." 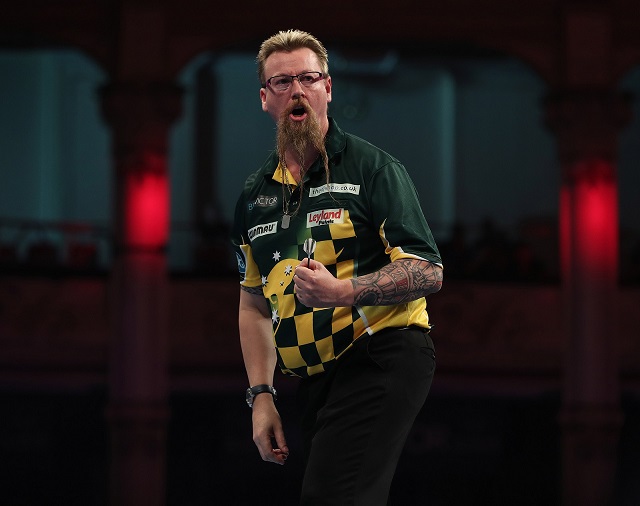 Whitlock won the all-Australian clash with Kyle Anderson 10-5 with some superb finishing as he moved through to the last 16, confirming his recovery from a wrist injury with a strong opener in Blackpool.
Although Anderson - making his third successive Blackpool appearance - took out 105 and a spectacular ten-dart leg in the early stages, Whitlock's clinical doubling helped him into leads of 4-1 and 7-2 as he took out 119 and two 70 finishes. Anderson finished 70, double 18 and 64 as he won three legs in a row to pull back to 7-5, but saw Whitlock edge the 13th on double ten before punishing misses from his compatriot in the next two to complete victory.

"I really enjoyed that," said Whitlock. "Kyle came back at me as I knew he would and he played really well, but my double tops were amazing. "I've been playing well lately and working hard. I fractured my wrist eight weeks ago and it set me back a bit, but it's good now and my confidence is great. I can't wait for the second round." 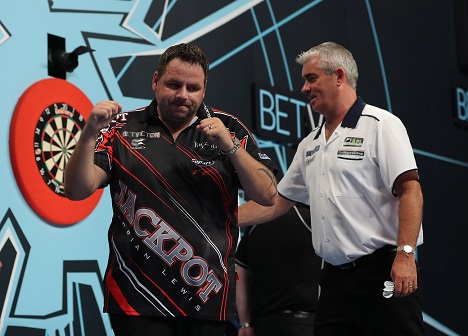 Adrian Lewis made a winning return to action following a month out for health reasons as he defeated Steve Beaton 10-7 in the BetVictor World Matchplay.
The Stoke ace required an operation on a torn muscle in his lower back at the start of the month, and revealed after seeing off Beaton with a 56 percent finishing ratio that he has struggled to practice for extended periods. However, he still proved too strong for the former Lakeside Champion, who led twice but was unable to halt Lewis' successful comeback.
Lewis hit back from a leg down to take out 110 as he led 3-1, only to see Beaton win four of the next five legs as he took a 5-4 advantage. Lewis, though, took out 78 and a 13-darter to retain the lead, and though Beaton took out 98 and 100 it was the 2013 finalist who sealed the win with an 11-darter.

"It's a massive win for me because I love this tournament," said Lewis. "It's my favourite event but this year I've got no expectations and it's the first time I've ever come into an event feeling like this. "Now it's about getting my belief back and making sure I'm more comfortable during the game. I can't dictate the pace and that's something I like to do but I got through the game and I'm happy. "It was a good battle and at five-all I was quite worried because Steve was scoring well and I found it hard to break him. I couldn't have asked for any more with my finishing under pressure, but my scoring could be better. "I've not had much practice for the last two weeks - the recovery time is usually six to ten weeks - and that probably showed a bit tonight because I was a bit patchy. I've got a couple of days now until the second round and I can prepare for that now." 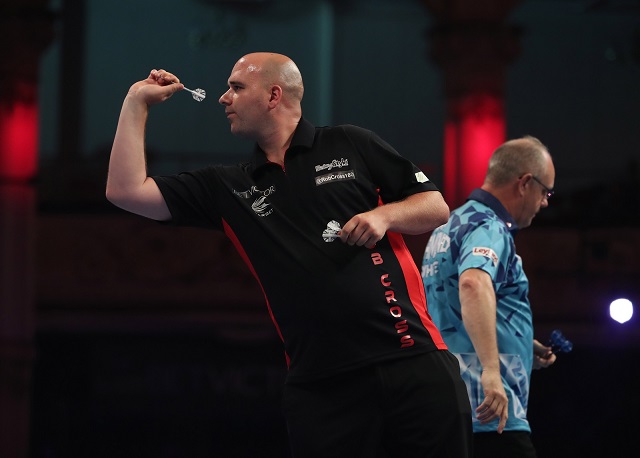 Newcomer Rob Cross made a winning debut in the World Matchplay by seeing off Ian White 10-7 as he set up a clash with Lewis on Wednesday.
Cross - an amateur star at the 2016 UK Open - has burst onto the professional circuit this year with two ProTour victories to move into the world's top 50 inside seven months, and overcame some early nerves on the big stage to progress. The game's opening six legs were shared before Cross claimed three in a row, including the first break of the match with the aid of a 180 and finishes of 60 and 68, as he moved 6-3 up. Cross also took out 125 as he moved into a 7-4 lead, before White responded to win three of the next four as he pulled back to 8-7. Cross, though, regained his range on the doubles to move to the brink of victory, before punishing two misses from White by taking out 70 to complete a memorable debut.

"It was a fantastic experience," said Cross, a 26-year-old from St Leonard's-on-Sea. "I feel brilliant, it's bigger than anything I've ever played in before. "I struggled to settle early on and missed a few doubles which could have made it easier for me but I'm happy to get the win. I still believed and it came together in the end. "It's amazing for me, I've never experienced anything like it before. I'm learning all the time and it's special to play the best players in the world, but I believe I've got the game in me to beat anyone."