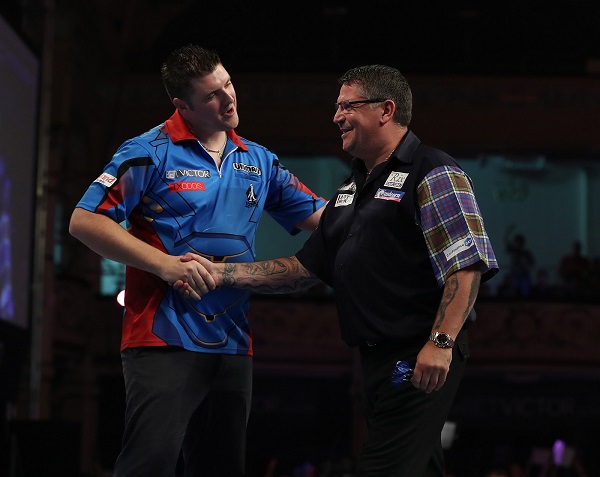 Northern Ireland's Gurney has been one of the circuit's leading performers this year, and claimed the scalp of world number two Anderson following a fine display, averaging 103 and hitting 55 percent of his attempts at a double.
Anderson had raced into a 3-0 lead, taking out 76 and 68 in the opening two legs, but Gurney finished 104 to get off the mark and then stole the fifth leg following four misses from the Scot. Anderson moved 4-2 up with a 12-darter which featured seven perfect darts, but Gurney responded again with a ten-darter and a 70 finish to level after eight legs. After Anderson edged back ahead, Gurney finished 121 on the bull, an 11-darter and double four to put himself ahead for the first time at 7-5. A 104 finish from Anderson stemmed the tide, but he was unable to find the break of throw to level again - missing double 16 for a 152 finish at one stage - as Gurney held out to seal the win by taking out 70.

"I play darts to play in games like that and I'm over the moon," said Gurney. "It was going to take a big performance to beat Gary and I know I played well. "I'm very happy with the way I coped under the pressure. I'm glad I won that game but I'm here to win and hopefully I can do the same in the next game and progress even further. "Everything I'm doing in practice, the dedication I'm trying to put in and trying to better myself as a dart player and not turn up and make the numbers up, it means a lot to me to beat Gary over a longer format." 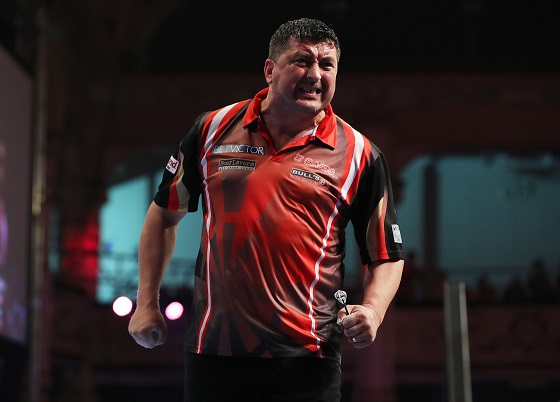 Gurney will now meet Mensur Suljovic in Thursday's opening quarter-final, after the Austrian won through to the last eight for the second time in three years with an 11-6 defeat of Justin Pipe.
The 2016 European Championship finalist produced a fine display of finishing, setting the tone by taking out 63 and 75 to win the first two legs and 116 on his way to a 6-3 advantage. Pipe took out 82 with a neat bullseye, double 16 combination, but three further legs from the Austrian moved him 9-4 up before he recovered from a mini-fightback to finally secure the win on double 18.

"I'm delighted and it is fantastic," said Suljovic. "I'm very happy to have beaten Justin and my finishing was super. I'm very focused and enjoying it, and I'm excited to be in the quarter-finals." 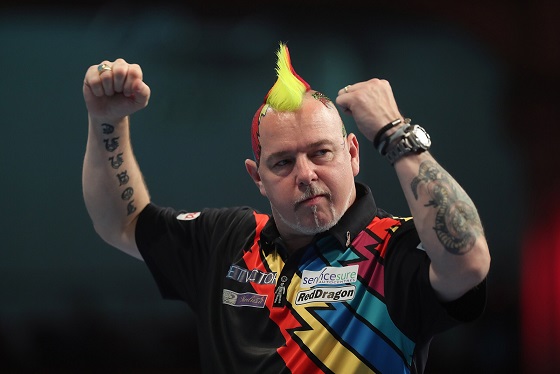 Peter Wright marched into the last eight with a superb 11-4 win over Spain's Cristo Reyes, averaging 104 and finishing 11 doubles from 14 attempts to set up a tie with Darren Webster on Thursday.
The world number three moved into leads of 4-1 and 7-3 with some clinical finishing, including a brace of 96 finishes and a 106 checkout. Reyes followed an earlier 116 finish by taking out 106 to reply in leg 11, but Wright responded in fine fashion with an 11-darter and a 101 finish before taking out 77 to seal a strong display. Having edged past James Wilson 10-8 in the first round, Wright admitted: "This was a much better performance and I felt really comfortable tonight. "Darren will be a very difficult customer. I've played him many times and he's like a little firework and he can play. I'm looking forward to it and it should be a good game." 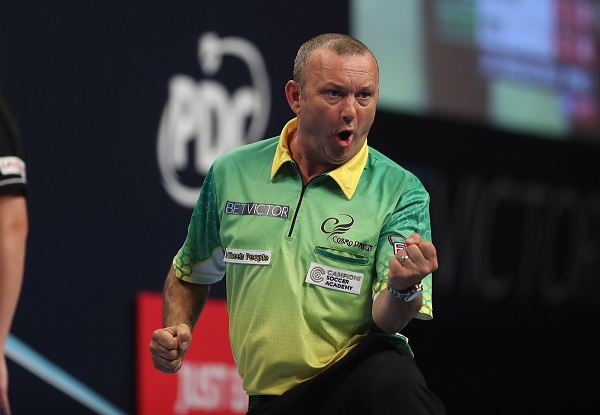 Webster secured his spot in a first World Matchplay quarter-final by defeating fellow qualifier Steve West 11-7, continuing his impressive form in Blackpool with another strong display to follow up his previous win over James Wade.
A tight opening saw West lead 2-1 early on before Webster took out legs of 14 and 12 darts to move ahead. A superb 135 bull finish from West, which followed a 171 score as he took out 306 in six darts, saw him level and he also shared the next two legs to remain level at four-all. Webster, though, broke throw twice in the next three legs as he moved clear at 7-4 before finishes of 120 and 133 moved the Norwich ace into a 10-6 lead. West responded with a 121 checkout, but two misses at tops in the next allowed Webster in on double eight to seal his last eight place.

"It's a massive win and I'm really happy," said Webster. "It took me a while to get going, but when I got into my flow my finishes were going in. "I watched my first round game back and I was rushing my last dart, so I was truing to be more steady and control that. "I'm practising ten times better than I'm playing on stage, but if I can keep learning and improving then I'm happy. I'm trying to do everything right and if I do that then I can't do any more, and I'll be a happy man. "I think in my last four TV events I've made two last 16s, a semi-final and a quarter-final, so I'm starting to do it now. I don't feel comfortable yet but I'm learning all the time."