JAPAN stole the show on the opening night of the 2018 Betway World Cup of Darts as they dumped out eighth seeds Austria in a 5-4 thriller in Frankfurt on Thursday.

The 32-nation tournament opened at the Eissporthalle with the opening eight first round games, as Seigo Asada and Haruki Muramatsu produced an impressive 92.74 average to see off world number six Mensur Suljovic and his partner Zoran Lerchbacher. 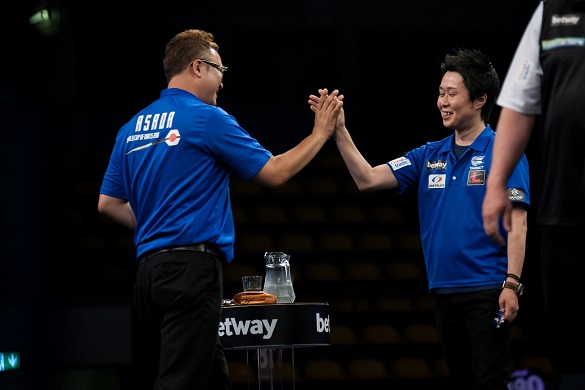 Asada, making his World Cup debut, fired in four 180s as Japan raced into a 3-1 lead thanks to two 14-dart legs and a 13-darter. Japan went within a leg of victory at 4-2 before Suljovic led the Austria fightback to take the nail-biting match to a last-leg decider. Austria produced a maximum with their first visit in the final leg before Asada replied with a 180 of his own, and then found double ten to seal a famous win for Japan and set up a clash with Canada in round two.

"We are delighted to make people in Japan happy," said Muramatsu. "There are a lot of Japanese darts players watching us back home so to win this match makes us very proud. "Austria have a very good team and it seemed unlikely that we could beat them before the game, but we proved what we can do." 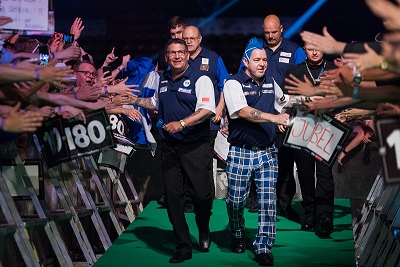 Scotland produced a strong display in their 5-1 triumph over the United States of America 5-1 to banish the memories of their defeat to Singapore at the same stage last year.
Gary Anderson, making his seventh World Cup appearance, and Peter Wright produced a clinical display to deny the American pairing of Larry Butler and Darin Young and will now meet Brazil in the last 16. Despite hitting the highest average of the night (94.66), Anderson believes there is much more to come from the Scottish pair.

"Even though we hit a decent average we never played well, but that shows we must be a strong team," said Anderson. "The USA were a harder team to play than Singapore last year, they've been playing pairs for donkeys years and they're always tough to break down. "It's been a while since I've enjoyed it so much up there, our practice was going really well and we had a good laugh so I'm confident we can bring that onto stage in the rest of the tournament."

Last year's beaten finalists, Wales, overcame a tough test from Thailand as they recorded a battling 5-3 win to set up a clash with Switzerland in the second round. Jonny Clayton, making his World Cup debut, and Premier League star Gerwyn Price found themselves tied at 3-3 before showing their class by rattling off the final two legs, including an impressive 108 checkout.

"Doubles games in a short format are always hard and we're both desperate to play well for our country," Price commented. "We weren't at our best tonight but the only important thing tonight was to get through so we're happy to have done that. "Last year Mark [Webster] and myself did well, and I believe that there's no reason why we can't win this tournament this year if we play to our potential." 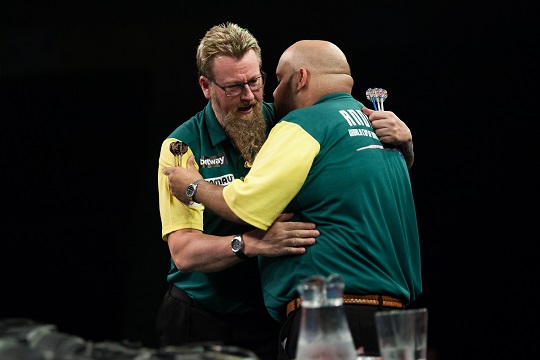 Australia produced a no-nonsense display as they cruised past Hong Kong 5-1. Simon Whitlock and Kyle Anderson, flying the flag for Australia for a third consecutive year, proved too strong for Royden Lam and Ho-Yin Shek as they set up a clash with Spain in round two.
"Tonight was a good start to our campaign but it is just a start," said Anderson. "When it all comes together we are capable of playing even better than that we did tonight and hopefully we will see that in the business end of the tournament. "The next round will be a different kettle of fish against Spain. Cristo [Reyes] and Toni [Alcinas] are well capable of giving us a close game." 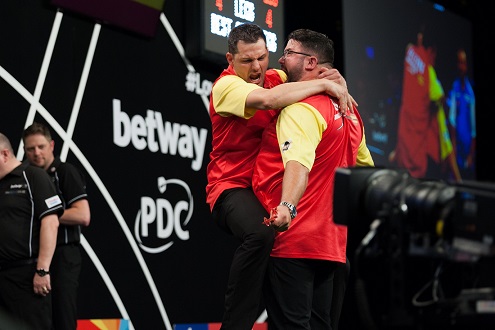 The Spanish duo came through a close game against Russia as they fought back from behind to overcome Boris Koltsov and Aleksandr Oreshkin in a deciding leg, as Alcinas followed an earlier 141 checkout by finishing 136 to snatch victory.

Elsewhere, Canada's John Part and Dawson Murschell got their campaign off to a winning start with an emphatic 5-1 triumph over Italy. 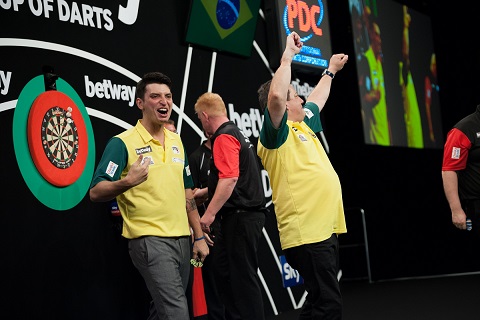 Brazilian pair Diogo Portela and Bruno Rangel cruised past Denmark 5-1 to match their nation's achievement of 2017, when they also reached the last 16.

"I've known Bruno for a lot of years and he used to play darts with my dad, so to bring both families together here is a dream," said Portela. "The party has started and I hope it can continue in the next round. "We've got through the first round for two years now and we're showing that there are good players in Brazil."

Switzerland's Alex Fehlmann and Andy Bless battled to a 5-2 win over China, for whom Momo Zhou became only the second female competitor in the event's history.