PETER WRIGHT overcame his recent illness as well as a spirited display from Brazilian Diogo Portela to get through the first round of the William Hill World Darts Championship. Beside him out of the seeded players only Darren Webster progressed while Kim Huybrechts and Cristo Reyes were eliminated by James Richardson and Toni Alcinas. 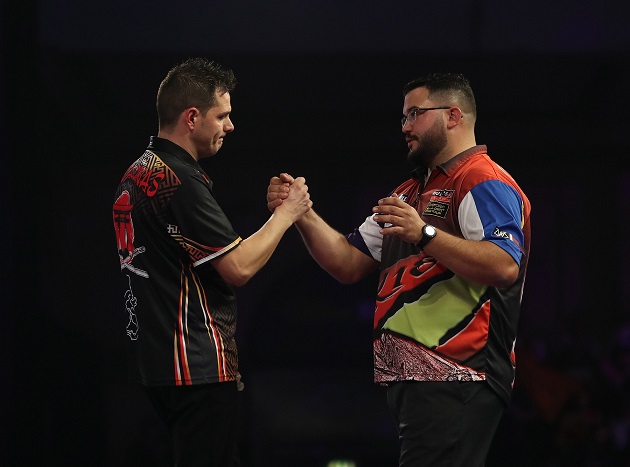 TONI ALCINAS won the all-Spanish first round tie with compatriot Cristo Reyes 3-1 to reach the second round of the William Hill World Darts Championship for the first time. The two great friends are World Cup team-mates and have battled against the rest of the world for the past three years, but this time had to face each other for a last 32 spot. Mallorca came out on top against Tenerife, with Alcinas averaging only marginally more than Reyes and only hitting one maximum to his opponent's three, but more consistent scoring and better finishing won the day.
Reyes, the 26th seed, took the first leg in both of the first two sets, but lost the next three each time to fall 2-0 behind, with an 11-darter from Alcinas being the highlight. Reyes took out 118 either side of some questionable finishing as he managed to claw a set back, with both men missing chances, and in the next he showed off some skills with two tops seeing off an 80 as the set went the distance. Reyes had difficulty finding a treble in the decider though, and Alcinas had enough breathing space to take five darts to hit the winning double.

"I am happy with the win only 50 percent, the other 50 percent I'm unhappy because I've beaten my friend," said Alcinas, who takes on Kevin Munch in round two. "Cristo's a really good friend and every weekend when I play the ProTour we stay together. I am happy but I'm also not happy." 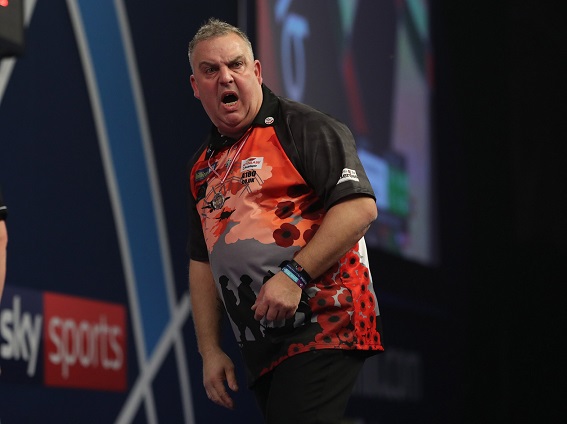 JAMES RICHARDSON was a man on a mission as he made short work of 18th see Kim Huybrechts in a one-sided 3-0 upset at the William Hill World Darts Championship. The Rushden ace returned to Alexandra Palace stage after a five-years absence, and came back with a bang as he avenged a 4-1 defeat which the Belgian inflicted in the 2012 tournament. A 97.93 average and four 180s was enough to Richardson to be totally dominant in the match, dropping just two legs to an out-of-sorts Huybrechts.
After Richardson opened up with a 13-darter he never let his foot off the gas throughout the contest, hitting timely 180s and pressure checkouts in a complete performance, mirroring his debut win over Raymond van Barneveld six years ago.

"It feels absolutely brilliant," said Richardson. "It's been five years since I've been on this stage - it's been five years of hard graft to get back here and I've done it. "Kim is a fantastic player. I was very focused, I knew what I had to do. I'm here to win, Kim's brilliant but I had to beat him and I did it - it's 1-1 on the stage with Kim now." 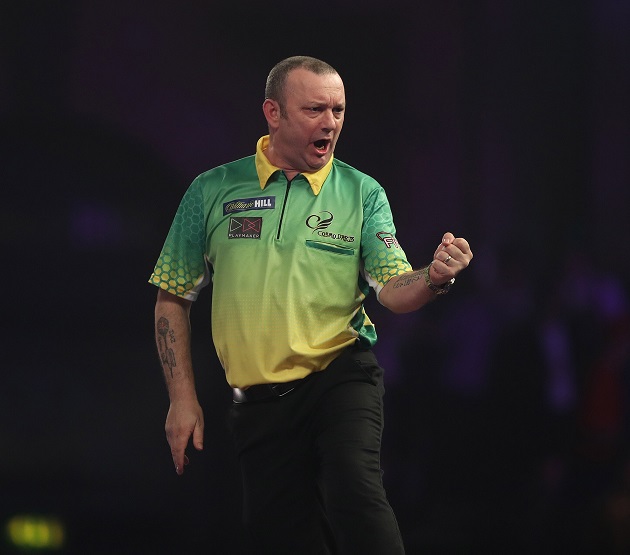 DARREN WEBSTER was almost caught out by Devon Petersen but managed to avoid yet another shock in this William Hill World Darts Championship as he emerged with a 3-2 first round win.
The Norwich thrower was coasting along nicely at 2-0 in sets before he almost self-destructed as South African Petersen suddenly came alive to level by claiming back-to-back sets. The remarkable Petersen comeback just ran out of steam in the fifth and deciding set though, with Webster able to gather himself to claim three straight legs to progress. Consistent scoring and occasional big finishes, highlighted by a superb 160, were the cornerstones of 23rd seed Webster building a healthy lead. Out of nowhere, Petersen hit form with two 140s in the first then two 180s in the second leg of the third set putting him right back in the contest. Webster levelled it up but when he missed two match darts for a 3-0 win and allowed Petersen to reduce the deficit, you sensed another big comeback was on the cards. Petersen then took the fourth set 3-0 to take another first round tie all the way, but a 180 at the start of the decider and a 66 finish settled Webster, and he ran away to victory as he set up a second round clash with Simon Whitlock.

"The first two legs I was cool as a cucumber, but the second two legs I was rough as a radish," said Webster. "I've got a new thing where I'm just focusing on the next three darts, I don't care who I'm playing, I don't care who's in the tournament, all it's about is me controlling my darts. "I think the problem there was I was too relaxed, when I went 2-0 up I should have given it a few big ones and celebrated a bit. There's more to come this time, I'm feeling pretty good." 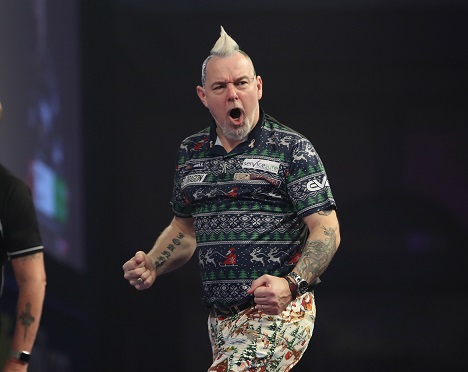 PETER WRIGHT overcame his recent illness as well as a spirited display from Brazilian Diogo Portela to get through the first round of the William Hill World Darts Championship. Wright was briefly hospitalised with gallstones at the end of November and has spent much of the past three weeks recuperating at home in Suffolk, and although he has yet to return to full health averaged 98.59 in a 3-1 win. Portela was making history as the first Brazilian to appear in the World Championship, and he did South American darts proud as he took a set and at times troubled the world number two. With 125 places between them in the world rankings though, Wright eventually proved too strong for Portela as he booked a date with Jamie Lewis in the second round after the Christmas break. Portela kicked off the game with an 80 finish to win the leg against the darts, but Wright responded to quieten the Brazilian with three straight legs, including a 101 outshot. Wright moved ahead in the second set but the South American Qualifier found some great form - hitting a 180 and 99 finish then a 52 checkout to take the set with just under a 100 average. Portela had a 14-darter in the third set but Wright was too powerful and took it 3-1, and after that the Scot pulled away in the final set to make the second round. "I suppose I was sweating up on the stage so I think I'm still not well to be honest," said Wright, who was full of praise for his opponent, after previously meeting Portela whilst filming the "180" game show in 2016. "I played with this man on a TV show a little while back and he said to me afterwards that he was going to Q School, and look where he is now, he's playing the World Championship - how amazing is he."

An emotional Portela - who moved from Rio to London to pursue his darting dream - was delighted with his efforts as he reflected on his achievement. "It was a dream come true," said Portela. "I didn't play my best. I was nervous at first then I relaxed a little bit in the second set but I went off the boil in the last set, couldn't find the range. "This experience for me though just proves that I can mix it with the best. If I can get a set off the number two in the world I can do a lot on the tour. "So it just keeps me motivated to come back here next year and next target is the Premier League!"