PHIL TAYLOR endured more than a few nervy moments before defeating Chris Dobey 3-1 as he started the final William Hill World Darts Championship campaign of his legendary darting career. The 16-time World Champion is hoping to make a fairytale ending to his amazing career, but was made to sweat just to get through the opening game of his farewell appearance at Alexandra Palace.
All eyes are on the 57-year-old this year and perhaps the enormity of the situation hampered him in his first outing - and he admitted he was struggling a bit for energy.
"I lacked a bit of energy against Chris tonight, I slacked a little bit and it's not me. I'm tired," said Taylor. "I never used to be like that before, I could win a tournament and then play another tournament, it's strange. I've got a few days off now to get ready for the next one." 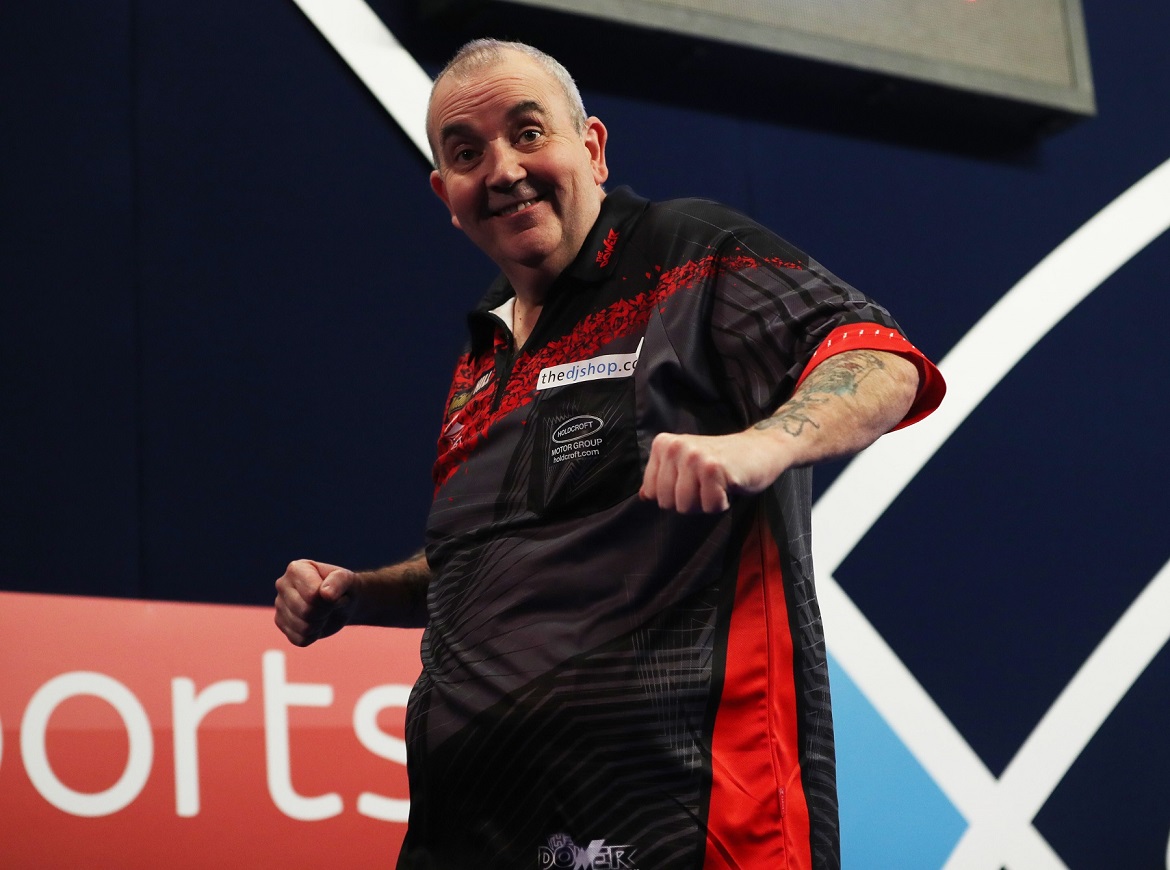 It was a very un-Taylor-like start as young star Dobey threatened to be the ultimate party pooper by going 1-0 and 2-1 up early on, but Taylor settled to bag the next two legs and win the opening set against the throw. It was more routine for Taylor in the second set as Dobey offered little resistance - apart from taking one leg when he hit a 180 and 60 outshot - as a 3-1 scoreline left the Stoke legend on course for a straight sets win. Dobey led at the start of set three, with Taylor taking out 105 in leg four to level with the tie's first ton-plus finish - but just as he prepared to close out the win the Bedlington thrower produced an 11-darter to extend the contest. Dobey really started the nerves jangling around Alexandra Palace in the fourth set as a 104 checkout saw him break the throw for a 2-1 lead to put him on the brink of levelling up the match - only to miss two shots at double 16 for the set. Taylor took all three darts to hit double 16 to level it up, and made no mistake in the final leg - to his and the crowd's relief - as he booked his place in the second round.

"There was a lot of pressure on me, but to get through Chris Dobey [was good]," said a relieved Taylor. "When they keep on about the future of darts, that's your fella I think. "And you've got Dimitri [Van den Bergh] as well, they're lovely kids and they're the ones to push the game on I think."
Taylor admitted the prospect of retirement is a tough one, but that it's even harder playing in the big events and not finding that all-conquering form of old.
"The fire's gone," he added. "I want to win, I've still got the fire in the belly to win, it's just the old utensils are not working as good as they used to. It's awful, it's killing me. "And you know by my interviews, I have been very critical of certain players, sometimes justified maybe sometimes not. I've been a little bit bitter and I'm gutted that I can't play what I can, and that's what's killing me really. "I'm really trying so hard and I can't do what I used to do. So I've got to shut up now." 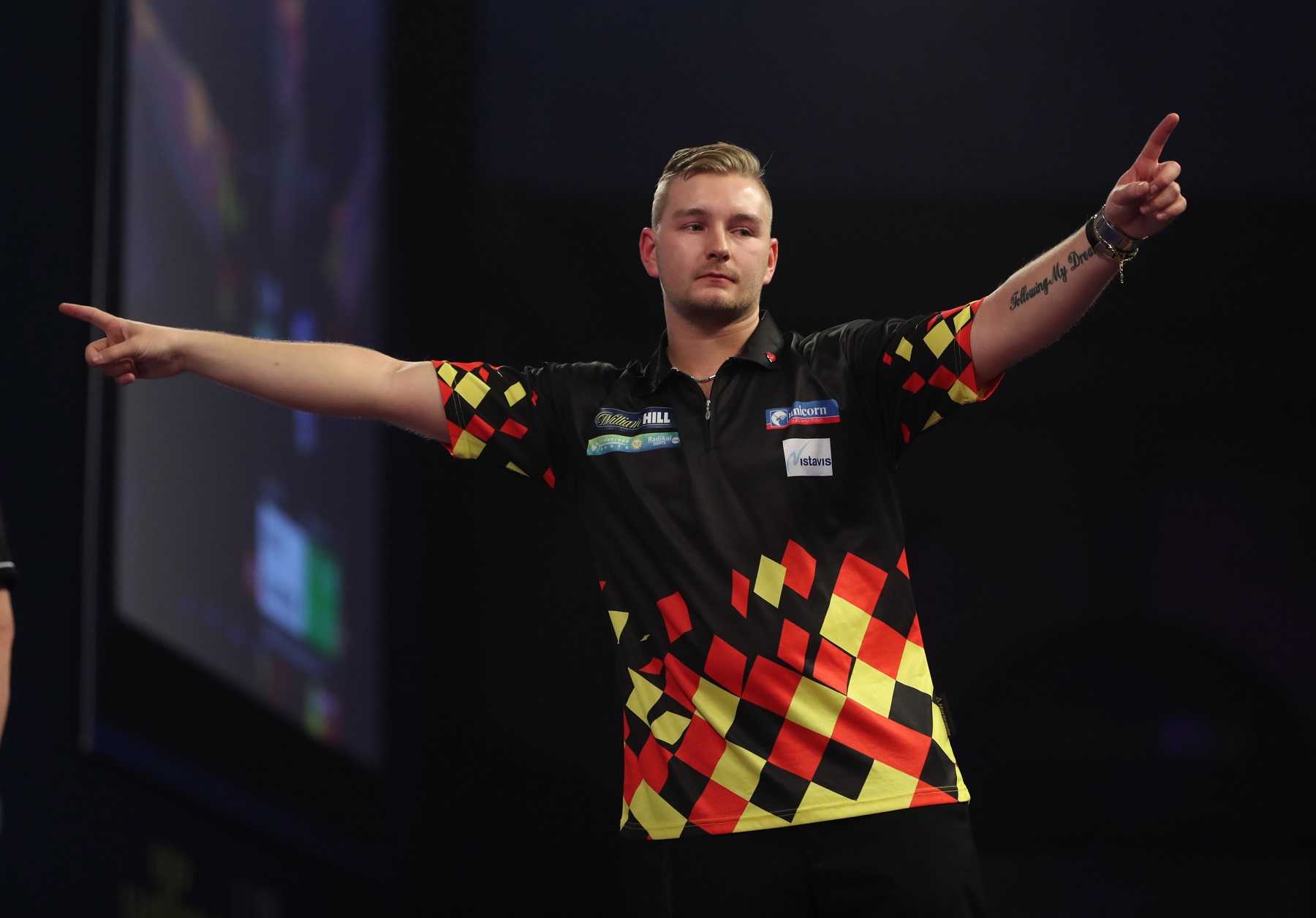 New World Youth Champion Dimitri Van den Bergh is aiming high after he produced a 104.17 average - the fifth best first round effort in tournament history - to see off former Stephen Bunting 3-1, despite the former Lakeside Champion hitting a 170 checkout. Van den Bergh averaged 104.17 - the fifth-highest first round average in tournament history - and hit five 180s in an entertaining win that saw Bunting hit four 180s of his own and three ton-plus finishes, including a maximum 170, but still end up on the losing side.
Van den Bergh came flying out of the traps with a 13-darter, but Bunting responded with a 100 outshot and capitalised and three missed doubles to make it two quick legs to go ahead. A 180 from Van den Bergh saw him earn a break back straight away to level up, before taking the decider and claiming the opening set with a 100 average. The young Belgian blazed through a top-quality second set with a scorching 116 average - Bunting himself averaged 101 and hit a maximum 170 but could only win one leg as finishes of 127, 72 and 88 put Van den Bergh two sets up. Bunting came out fighting in the third as he made the most of a suddenly nervous looking Van den Bergh, who missed four shots at double and despite clawing one leg back was unable to salvage the set as the St Helens ace hit back against the throw. Bunting then opened set four with a 144 finish and took out 96 to move 2-1 up, but Van den Bergh levelled by finishing 76 before landing two 180s in the deciding leg to tee up double three as he sealed the win.

"I'm definitely happy with that," said the 23-year-old. "It's a winning average so that's very important to me, but winning today on my father's birthday that means more. "He's the reason I play darts, he had ten years in a row playing in the national team of Belgium so, of course it inspires me. "Everybody handles pressure in their own way but I'm playing the game that he taught me - he gave me some basic instructions and that's what I've used here. Sometimes I looked over at my dad and his eyes, that's what made me strong again in this game. "My ambition, the way I'm feeling, I'm ready for something big. My dad says I am and when my dad says it, then it's true. "So I'll keep working and I'm going for the quarter-finals at least, and if I get to the quarter-finals I'm definitely going for more, I never give up." 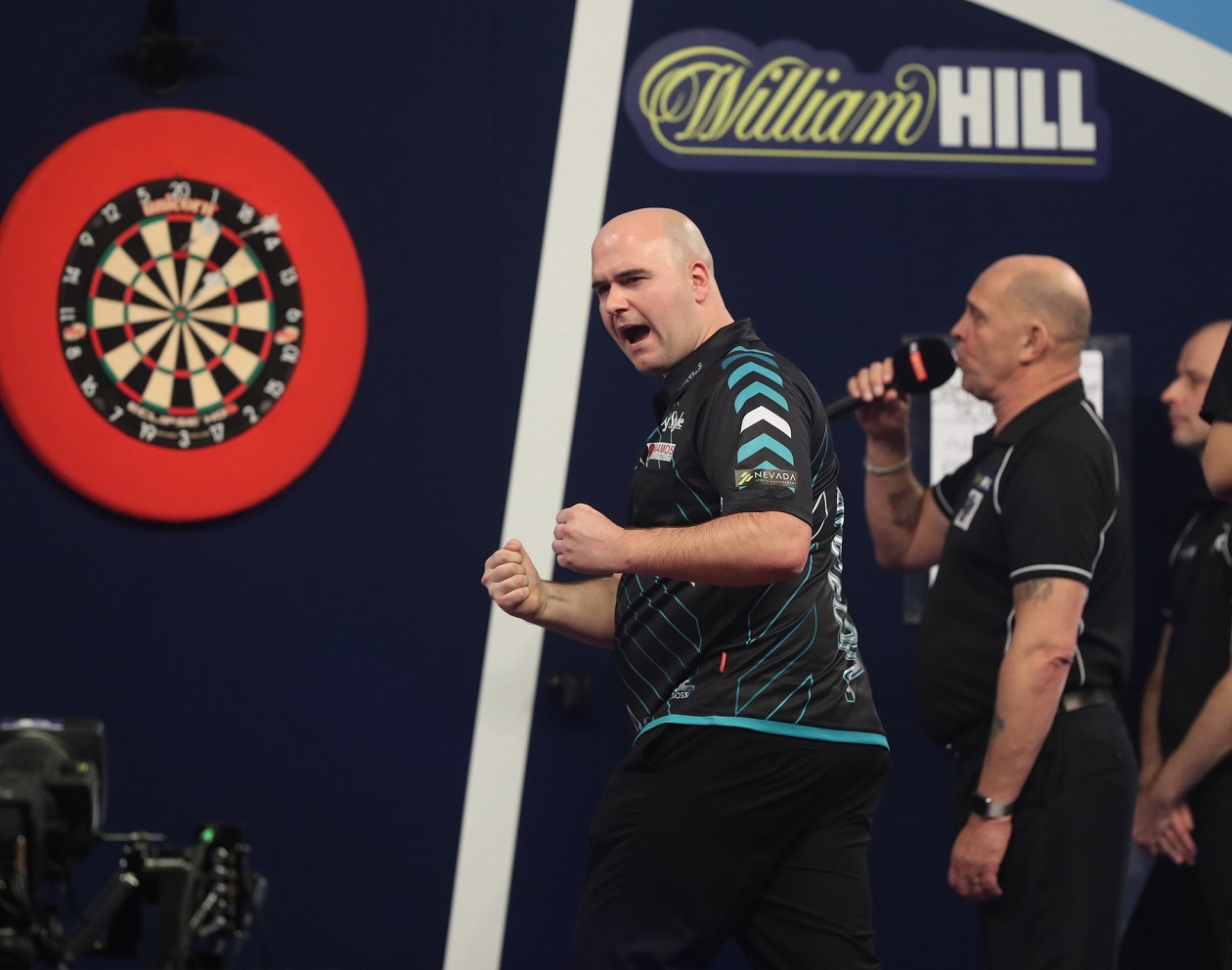 WELL-FANCIED debutant Rob Cross made a winning start to his William Hill World Darts Championship campaign as he finished strongly in a 3-0 win over game qualifier Seigo Asada.
It's unusual for a debutant to be amongst the tournament favourites, but Cross' stellar year had seen him amongst the front runners for the title before the former electrician had even thrown a dart at Alexandra Palace. The number 20 seed is a four-time winner on the PDC circuit in his first year as a professional leading to his lofty reputation entering the tournament - and although he took time to find his stride he finished with a flourish.
Cross claimed the game's opening set with a 3-1 scoreline to put himself in command and settle any debut nerves, but the second set was a much more lively affair as Asada hit legs of 12 and 15 darts. Cross found form when he needed to though, finding back-to-back 12-darters of his own at 2-1 down to clinch the set on a brilliant 121 checkout. Asada stuck to his guns and took the opening two legs of the third set courtesy of 70 and 120 checkouts, before Cross found his best darts with seven perfect arrows on the way to an 11-darter. Back-to-back 180s in the next helped Cross to seal a 3-0 victory that looked more comfortable on paper than it was in reality.

"I've had a two-week build-up leading into this and I think there was a bit of pressure and that showed in the first set," said the European Championship finalist. "It gradually got better. "People who you talk to were buzzing for this two months ago and I didn't understand - and now I do. It's a phenomenal place, I absolutely love it. It's brilliant, very special." 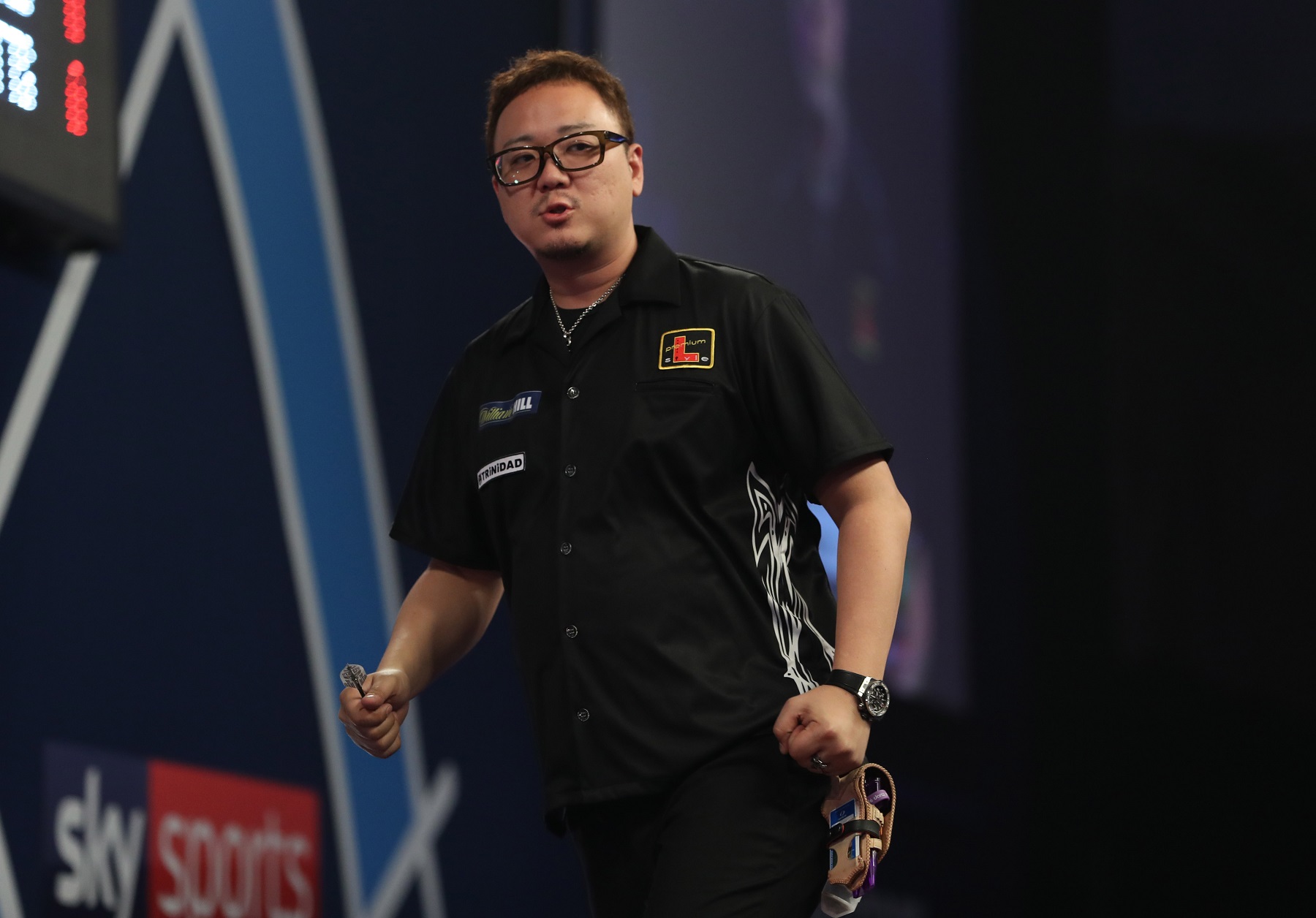 SEIGO ASADA secured a first round date with Rob Cross after surviving an entertaining late comeback from Gordon Mathers to win their preliminary round clash in a sudden-death leg. After Asada won the opening leg, Mathers - the 2017 DPA Australian ProTour champion - went on to claim the next three legs and the opening set, and there looked like only one winner. Japanese qualifier Asada had other ideas though, breaking the throw in the opening leg of the second set with a 46 checkout before sealing the set 3-0 thanks to a 120 finish. A 16-dart leg followed by a 110 checkout made it five straight legs for Asada and put him on the brink of victory, but he missed two darts for the match and Mathers hit double 16 to save himself. Mathers then produced an 11-darter to level the match and force a winner-takes-all final leg, but it was Asada who held his nerve to set-up his big game later in the night.