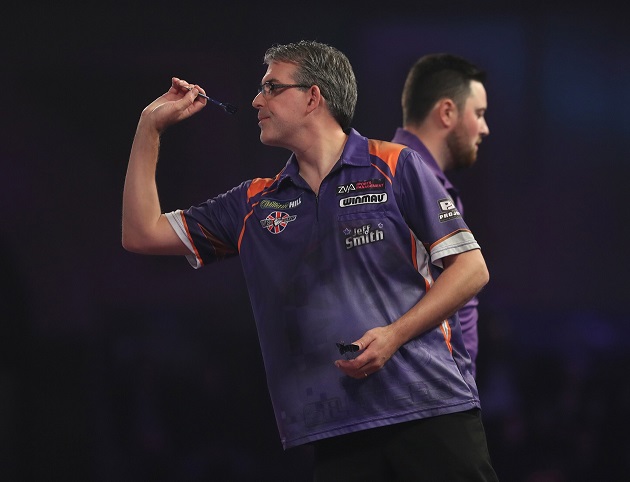 JEFF SMITH started the evening session with a bang as he impressed in a 2-0 victory over talented youngster Luke Humphries in their preliminary round encounter. Arguably the tie of the preliminary round pitted former Lakeside Championship finalist Smith against rising star Humphries, who won the Development Tour Order of Merit following five wins this year.
Canadian star Smith banged in a maximum 170 finish in the very first leg, and that set the trend for some smart finishing from both men, who only missed one dart at a double each in the match. Smith hit the bull again to take out 82 and completed a 3-2 win in the opening set with a 106 outshot as his experience seemed to be the difference. Humphries started well in the second set with a 94 finish but had no answer to Smith's finishing as the former PDC Tour Card Holder took out 78, 126 and 74 to book a first round date with Gary Anderson. 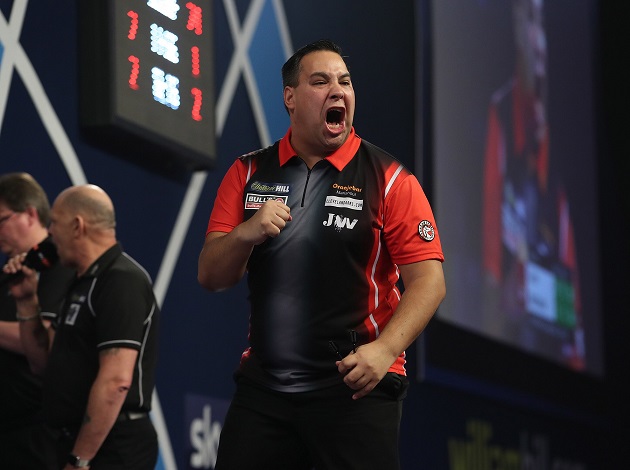 JERMAINE WATTIMENA won an astonishing first round clash with Joe Cullen in a final set decider after a truly breathless affair at the William Hill World Darts Championship. The opening two sets went in the blink of an eye as Wattimena claimed the first in four-and-a-half minutes and Cullen replied to level in just two minutes and 45 seconds.
A frantic clash went one way and then the other and was packed with quality as well as the fast and furious pace, with both hitting two three-figure checkouts and averaging around 96. After two one-sided sets, the third was more competitive with Cullen mixing in a 13-darter with two 180s, but it was not enough as Wattimena took out 111 in the opener and 70 in the decider. Cullen then took his turn to dominate the see-saw encounter as he took out 66, 130 and 84 for yet another quick-fire set, and then added a fourth leg in a row with a 79 to start the fifth set. Wattimena hit an amazing 141 to reply but Cullen then moved ahead and looked set to clinch the tie, only to miss four match darts and allow the Dutchman to force a tie-break at two-all in both sets and legs. It was Cullen who then blinked first in extra legs, and Wattimena cleaned up the next two legs to reach the second round for the first time and secure a tie with Steve West.

"Great, wonderful, there's not a lot more I can say," said Wattimena. "I was very nervous but I'm now looking forward to playing in my first second round match. "He played well, I think he won the second set quicker than mine! He hit two bull finishes and we both played very well and finished very well." 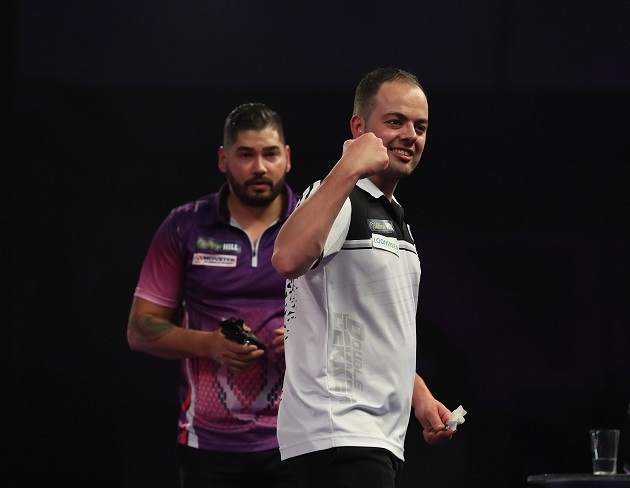 JAN DEKKER came from a set down to win his all-Dutch battle with Jelle Klaasen 3-1 as he showed why he has been a leading double hitter on the circuit this year.
An outstanding opening from Klaasen saw the former Lakeside Champion claim the opening three legs without reply, but while doubles would later be his Achilles heel, they would be Dekker's method of victory. Dekker had three ton-plus finishes and was brilliant on his doubles, hitting nine out of 14 to continue his clinical displays. Outshots of 100 and 64 helped Dekker ease back into the match by taking the second set in four legs, and more brilliant finishing of 128, 120 and 74 put the youngster 2-1 ahead in sets. Klaasen missed a host of chances in set four as Dekker made no mistake to claim the decider and send the 2016 semi-finalist crashing out at the first hurdle. The win sets up another mouth-watering clash for Dekker in the second round as he takes on new World Youth Champion Dimitri Van den Bergh.

"In the beginning I wasn't good," admitted Dekker. "I lost that set 3-0 and I was just thinking that I have to fight more. "After the first set I played well and if I'm playing well I always hit my doubles. I had to work really hard against Jelle but after the second set I had a feeling that I could beat him and I just kept fighting. I'm over the moon to win that one. "When you're playing him, he plays so fast that you just have to take some time when you're on stage. It feels like he's in a hurry and I'm not in a hurry so I just needed to take some time." 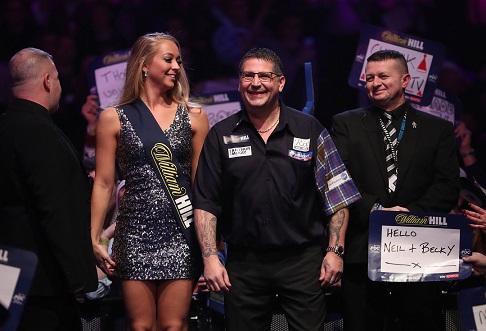 TWO-TIME winner Gary Anderson opened his William Hill World Darts Championship campaign with a convincing 3-0 victory over Canadian Jeff Smith. Canadian ace Smith had opened the evening session with a 170 checkout as he defeated youngster Luke Humphries in straight sets in the preliminary round, but was unable to upset the odds against the number three seed.
Double champion Anderson produced some of his best scoring in his first round run-out, with seven 180s deflecting the attention from 18 missed doubles as he averaged almost 101. The second set was other-worldly from Anderson though, and he averaged just under 132 courtesy of four 180s and the first ten-dart leg of this year's tournament in a run of ten, 11 and 12 darters. Former Lakeside Championship finalist Smith had missed just one double against Humphries, but hardly got a sniff early on as he was bullied out of the contest.

"That's a bit better than what I thought it would be," said Anderson. "The 180s were flying in but I was making a mess of some counting - but I've done it before and we'll get over it. "It's hard for both of us, Jeff played earlier on at seven o'clock and then he's got to wait. It's my first game and he's had a warm-up and I've not, so it's a very hard game to play the first round."
Anderson has reached the final in each of the last three years at Alexandra Palace, winning two titles before seeing Michael van Gerwen claim the trophy 12 months ago.
He added: "This is everything, you ask anyone and you'll get the same answer. Michael took it off me last year and I'd love to do the same to him this year. "When Michael beat me last year it was the best sleep I'd ever had - all the pressure was off me, but a few months into it I thought I want it back so I'm going to have to try now."