JAMIE LEWIS survived a a flying start from Kenny Neyens to win their preliminary round match 2-1 and sett up an all-Welsh clash with Jonny Clayton later on Sunday afternoon.
Belgian debutant Neyens came bursting out of the traps with a 180 on his first throw, and he added a second maximum in a 14-dart opening leg. He added the second leg as well before Lewis woke up and hit a 'snooker maximum' 147 checkout which kick-started his challenge and prompted a three-leg burst that gave him the set from seemingly nowhere. A 13-darter made it four on the spin for Lewis but as he charged towards the finish line young Belgian Neyens kept himself in the tournament with gutsy 62 and 74 checkouts to claim the second set in a decider. Lewis had missed a match dart in the second set, but made no mistake in the next as he took all three legs of the third and finished with a wonderful ten-darter to book his place in the first round. 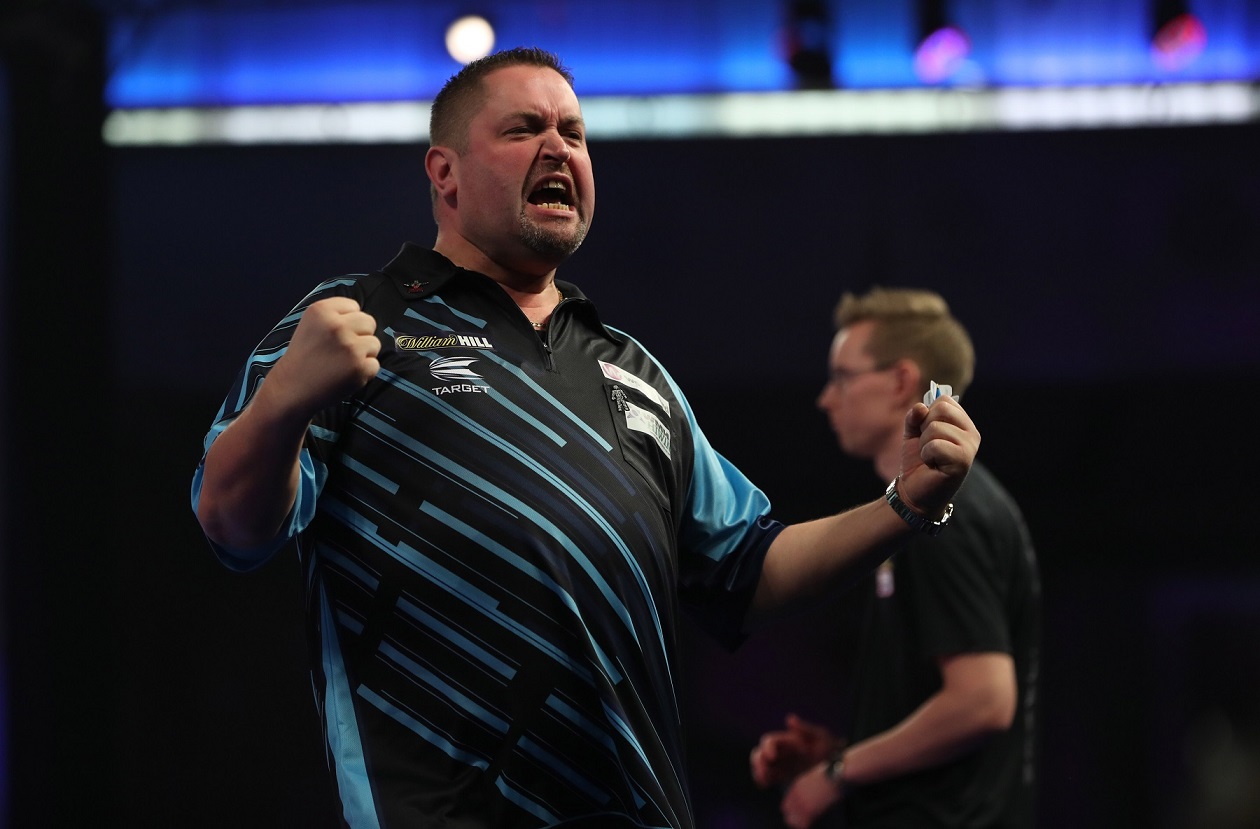 ALAN NORRIS enjoyed a largely comfortable William Hill World Darts Championship first round victory as he beat Kim Viljanen 3-0 at Alexandra Palace. Former Lakeside Championship finalist Norris had to work harder at times than the whitewash suggests, especially in a tough second set as Finland's Viljanen finally found some form.
Norris raced through the opening set with ease but Viljanen found form in a major way with two great legs, including a 12-darter, putting him 2-0 up. Norris responded to level and Viljanen then missed five darts for the set allowing Norris to pinch it, and that represented Viljanen's last chance as Norris cleaned up the third set with a flourish.

"Kim's a quality player," said Norris. "I think he's won seven out of the ten Scandinavian (events) this year, but I'm getting more and more experience. "I'm up there on ProTour events, I'm up there on the stage nearly every month, with these guys it's still once a year or twice a year. "I know Kim well, he's a great player but he didn't perform to what he can. At 2-0 down in the second set I wasn't at the races but he gifted me one to get me back in the match. "That was a big turning point because he's got the set in the bag, he had darts to win it 3-0 but I got it back on track so I'm very happy." 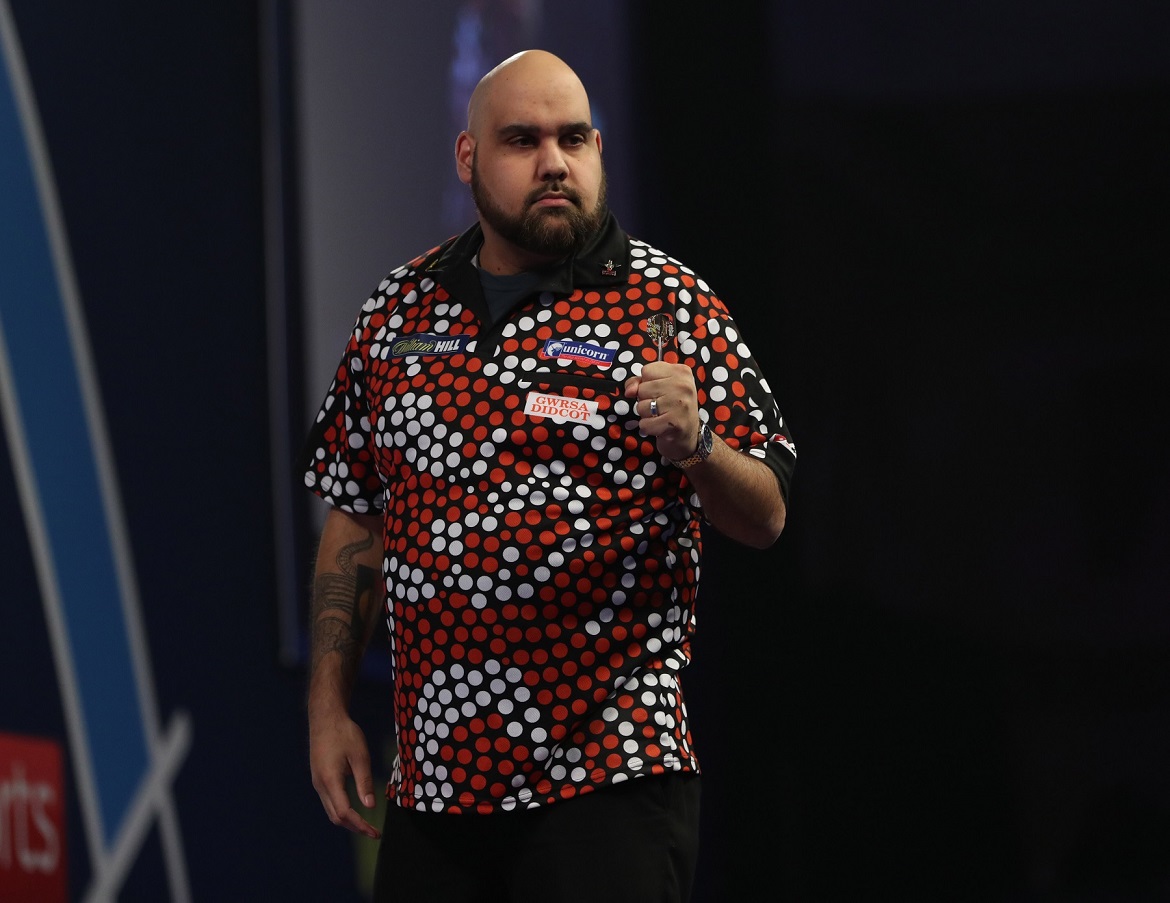 AUSTRALIAN Kyle Anderson secured his spot in the second round of the William Hill World Darts Championship with a gritty 3-1 win over Yorkshire's Peter Jacques. The Auckland Darts Masters winner made his superior finishing count as Jacques had two more shots at double and one more 180 than Anderson, but could not find that consistency on his Alexandra Palace debut. Anderson made his tournament experience count and that, along with his 53 percent checkout ratio booked him a second round date with either Raymond van Barneveld or Richard North.
Jacques took the opening leg with a 75 outshot but Anderson replied to rattle off the next three legs, including a 109 finish, to take the first set. Huddersfield's Jacques looked a new man in the second set as he sprinted 2-0 in front but could not take advantage as Anderson hit a 70 checkout followed by a 14-dart leg to double his lead. Anderson again had to come from behind in the third, hitting a 12-darter when he needed it most to level it up at 2-2, but this time it was Jacques who bagged the decider to get a set on the board. It was a mere temporary reprieve though for Jacques, who hit 180s in consecutive legs only to lose those legs to Anderson in 17 darts each, before the Australian polished off the match with a second 60 finish of the set.

"As you do you look down the line of your bracket and I have," said Anderson. "I don't like to come across as cocky but I've seen the bracket and I've got the confidence in myself to get to at least the quarters to be honest." An improvement on hitting the doubles has given Anderson a new-found confidence that he can make a big impact on the event this year. "I've always know my capabilities and my power scoring, my trouble has always been doubles," he added. "It's nothing else but the doubles, if you look at all my games I'm scoring brilliantly but I miss doubles and it brings my average down, and if you don't hit doubles you don't win. "People look at me and think if I don't hit my doubles then they'll be OK, but now I'm starting to hit my doubles and they're starting to think differently and that brings pressure on them." 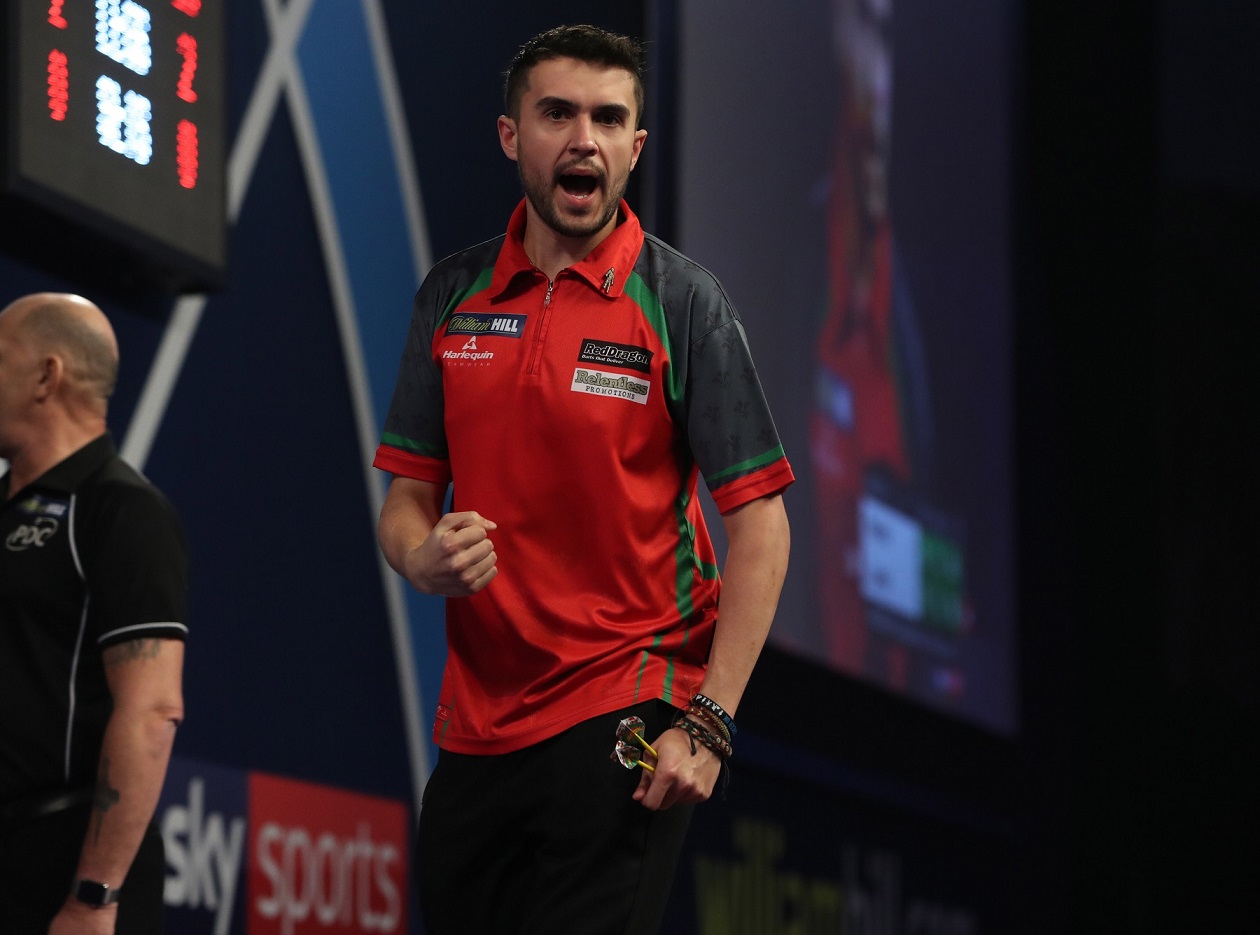 JAMIE LEWIS completed a super Sunday at the William Hill World Darts Championship as he secured a second win of the day with an impressive 3-0 victory over Jonny Clayton in the first round. Lewis has been talked up as a potential star in recent years, and after a disappointing 2017 will enjoy his Christmas dinner in Cardigan with an eye on his second round tie following a productive day at Alexandra Palace. Lewis' preliminary round defeat of Kenny Neyens set up an all-Welsh clash with his good friend Clayton, who was well fancied after a runner-up performance at the Players Championship Finals but could just not getting going in this event.
Clayton tried to lay down a marker in the opening leg with his first 180, but Lewis responded with a maximum of his own on the very next throw - and he was the one to build on that by taking out a superb 126 for a 12-darter. That earlier preliminary round win may have warmed Lewis up nicely, as he then closed out the first set with a brilliant 11-darter after Clayton had to take out 104 just to get off the mark. Lewis could not keep up his 101 average in the second set, but the result was the same as he doubled his lead despite handing a leg to Clayton with three missed double 16s, as he returned to hit that same double in the next leg to move two sets up. Clayton managed to bag two legs in the third set, but Lewis always looked the stronger as he hit 180s in all three legs he won - highlighted with a 130 finish and a closing 11-darter to clinch the match.

"I'm over the moon," said Lewis, who will face either Peter Wright or Diogo Portela on December 27. "It's been a tough day, playing the preliminary round and then playing a good friend of mine in Jonny - it's something I was hoping to come here and do. "I've not had a great year on the tour, I thought I'd blown it and I had one chance left at Milton Keynes in the qualifiers so I thought I'd go and give it my best because I know I can play as good as anybody. "I'm getting more used to the stage now, I'm getting a bit more confident in myself and my ability. "I've been in the PDC now for five years and I've still not really shown what I know I can do, so it is about time I do it. Hopefully this week might be the chance."