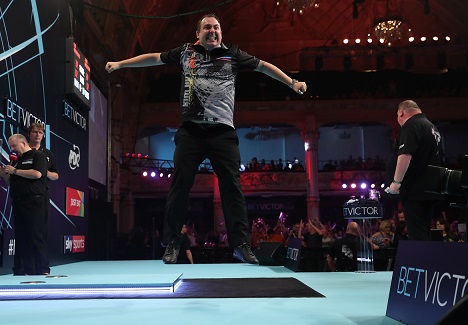 KIM HUYBRECHTS claimed his first ever win at the BetVictor World Matchplay in thrilling style as he edged past John Henderson 13-12 in an incredible clash as the first round concluded on Monday.
Huybrechts had suffered six consecutive first round exits on the famous Blackpool stage but broke his duck against Henderson to kick off night three in Blackpool with a bang. The Belgian had to survive a match dart in a dramatic deciding leg before finding double eight to claim victory in a high class contest which saw 13 180s and five ton-plus finishes.

"I am so relieved to finally win a game on this stage," said Huybrechts, who will face Peter Wright in round two. "I was certain that John was going to hit double top and win the match but when he didn't I knew I had to take my chance and thankfully I did. "It's never easy playing under such huge pressure but I'm so happy to win and now I'm going to enjoy this moment."

The former Premier League star raced into a 5-1 lead before Henderson battled back to 6-6 and then took out 60 to take the lead for the first time in the tie at 9-8. Huybrechts broke straight back with an 85 finish to save the match and take the game to a first tie-break of the evening. The Belgian missed four match darts in the tie-break, as Henderson took the match all the way to 12-12. With Huybrechts unable to watch, Henderson missed a match dart of his own at double 20 before the Belgian stepped up to take out 32 and seal his passage into round two for the first time. 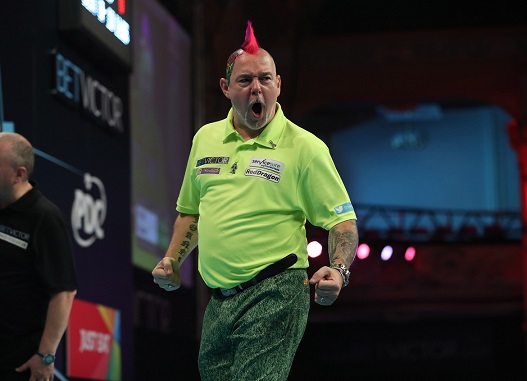 Last year's beaten finalist Wright cruised to a 10-5 victory over Jelle Klaasen in the final game of the first round, hitting a roof-raising 170 finish along the way.
The former UK Open champion struck a 122 checkout to move 3-0 up and found himself in a commanding 4-1 lead heading into the first break. Klaasen fought his way back to 9-5 but was unable to get close to challenging for the lead as Wright marched onto the last 16 for a fourth successive year.

"I wanted to play a lot better than I did tonight," said Wright, the 9/2 second favourite with sponsors BetVictor. "Ideally I would've produced a ton-plus average but there's a long way to go in the tournament and I'm confident I will beat Kim in the next round." 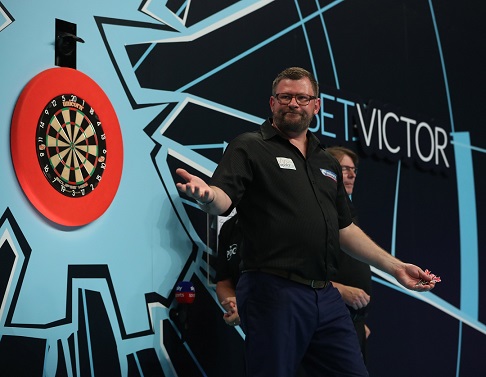 The only former champion remaining in the tournament, James Wade, was made to work hard for a 12-10 win over Jermaine Wattimena in the second tie-break of the evening.
With neither player producing their best game, the six-time Winter Gardens finalist was unable to shake off a stubborn Wattimena, who fought back from 9-7 to take the game into additional legs. Wade held throw to take an 11-10 lead before landing double 18 to find the match-winning break of throw and set up a round two clash with Simon Whitlock. 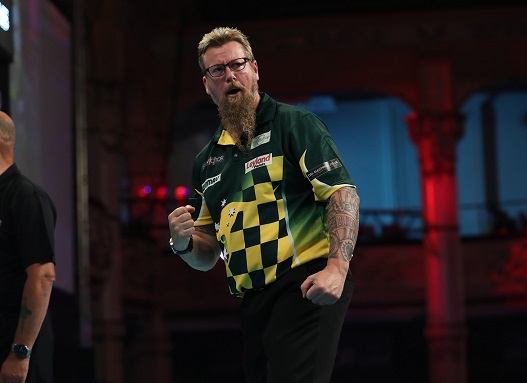 Whitlock secured a convincing 10-2 victory over his close friend and Winter Gardens debutant Richard North.
The Australian flew into a 4-0 lead and, with 36 points separating North from registering his first leg, Whitlock hit a crucial 126 finish to go into the break with a commanding five leg cushion. The two-time Blackpool semi-finalist made it 8-0 before North won back-to-back legs to make it 8-2, but they proved to be nothing more than a consolation as Whitlock progressed to round two for the sixth time in eight years.

"Richard is a fantastic dart player, a lot better than he showed tonight," said Whitlock. "It's never easy playing a friend but I felt relaxed during the match and I'm happy to make it through."