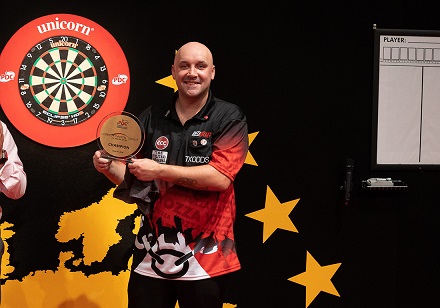 Having won his PDC Tour Card for the first time in January, Hughes took just five months to taste success on the PDC stage, defeating Stephen Bunting 8-3 in the final at the PVA Expo.
The win also secures a maiden appearance at the World Matchplay for a resilient Hughes, who plied his trade on the PDC Challenge Tour in 2018 having failed to win a Tour Card at his first attempt.

"It's an amazing feeling to win my first title, I've worked so hard for this moment," said Hughes, who defeated Devon Petersen, Adrian Lewis, Ron Meulenkamp, Ian White and Simon Whitlock to reach the final. "I've been playing well for a while now, better than I played this weekend strangely enough, and now I've finally got the results to show for it. "To make the World Matchplay so soon is fantastic for me and now I can't wait to show the world what I'm about on one of the biggest stages in world darts."

The final of the ninth European Tour event of 2019 was played out by two European Tour final debutants, and it was Bunting who struck first with a break of throw in the opening leg after nervy missed darts at double from Hughes.
Bunting produced an incredible dart through to a blocked bullseye for a 95 checkout to take a 3-1 lead, but that was as good as it got for the world number 18 as Hughes reeled off the next seven legs without reply. A clinical 83 checkout saw Hughes take the lead for the first time at 4-3, before the biggest moment of the match came in the following leg with Hughes taking out 120 for a double break of throw. From there, it was Hughes' turn to punish Bunting's missed darts at double as Hughes rattled off the final three legs to become the fifth different winner on the 2019 European Tour and seal the 25,000 pound top prize. 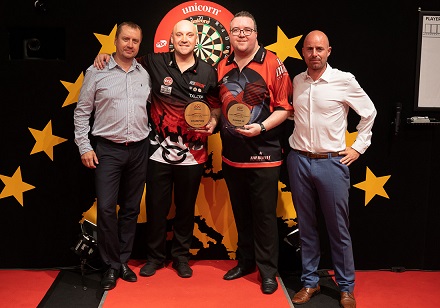 A winner of two ProTour events in 2014 and 2016, Bunting came close to his first PDC stage title having claimed impressive victories over Peter Wright and Daryl Gurney on his way to the final.

"I am proud of my achievements this weekend, even winning just one game I would've taken positives from," said Bunting. "It shows progress that I've reached my first European Tour final, hopefully it will be the first of many, and I can take my good form into the upcoming TV events."

The 140,000 pound event reached its climax on the final day of action, with the Last 16 taking place in the afternoon session, followed by the quarter-finals, semi-finals and final in the evening.

Keegan Brown was the other big winner in Prague, as his run to the semi-finals saw him seal a return to the World Matchplay, defeating Michael van Gerwen and Mensur Suljovic along the way.
Corey Cadby's European Tour debut was ended by Mervyn King in the Last 16, while Saturday's nine-dart hero Gerwyn Price was knocked out by Whitlock.