Gerwyn Price retained the International Darts Open title in Riesa with a gritty comeback to defeat Rob Cross 8-6 in Sunday's final.
The Welshman had claimed his maiden European Tour win at the Sachsenarena 12 months ago, and won a second 25,000 pound title with a memorable display.

Cross enjoyed the better of the early stages in the final, leading 2-1 as a 12-darter broke throw before following a 13-darter with a sensational 148 checkout to move 4-2 up. Price finished 121 to respond with a 12-darter, but tops saw Cross regain his two-leg cushion at 5-3. Price, though, produced some clutch third-dart doubling as he took the next three legs to move 6-5 up, punishing three misses from Cross in leg 11 as he moved back ahead. Cross found another 13-darter as he levelled, but Price followed a 177 with an 88 finish to edge 7-6 up before taking out 108 on tops to secure the title. 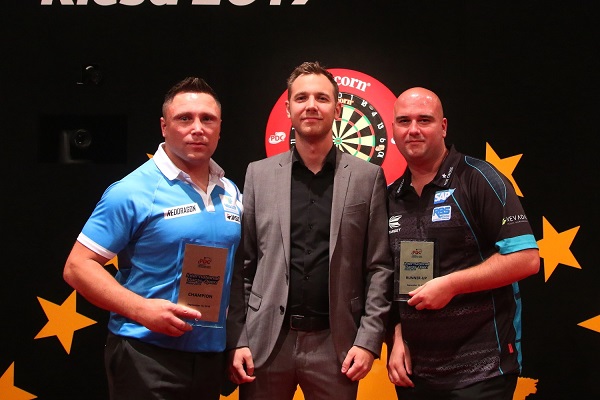 The Grand Slam of Darts champion began the final day with a 6-4 win over Joe Murnan, before repeating the scoreline in the quarter-finals against Nathan Aspinall. He produced arguably his best display in the semi-finals against Glen Durrant, pulling clear from three-all to take a 7-3 victory with a 102 average and seven doubles from 13 attempts, including a key 144 checkout, as he moved into the decider.

"It's the first time I've defended a title, so I'm over the moon," said Price, the world number seven. "Every game is like that [final] for me now and when I play people like Glen and the top players in the world like Rob, it's never going to be easy. I'm happy to get over the winning line. "I had three weeks off and after the break I wasn't very confident - I changed my darts, had a new set of darts and it seemed to work for me. "I usually start pretty well at the beginning of the year and then taper off, hopefully that's a bit different this year. I'm a bit more confident now after winning this one. "Maybe [I'll have] a weekend off next week and then I can look forward to Gibraltar and the rest of the year."

Cross had dropped just two legs in his opening three matches to reach the semi-finals, with a third round whitewash of Joe Cullen sandwiched by 6-1 victories over John Henderson and Richard North. He then came from 5-4 down to win his semi-final with Peter Wright 7-6, before being denied a first European Tour title in his fourth final.

"Fair play to Gezzy there, he played better and deserved to win," said Cross. "I come to the long days and I can't seem to get over that winning line, but I've enjoyed my weekend. It's been fantastic."

Durrant had reached his first European Tour semi-final, following up a 6-3 third round win over Michael Rosenauer with a clinical 6-4 defeat of Daryl Gurney in the quarter-finals, averaging 100 and hitting 6/11 doubles as he came from 2-0 down to take victory.
Wright won through to his second European Tour semi-final of the month, seeing off Austrian Darts Championship winner Mensur Suljovic 6-3 in the last 16 before whitewashing Adrian Lewis in the quarter-finals. He came from 3-0 down in the last four against Cross and took out 116 and 110 to lead 5-4, only to see the 2018 World Champion claim three of the final four legs to end his hopes.
North was a quarter-finalist in his first European Tour appearance of 2019, surviving a missed match dart from Steve West in the deciding leg of their third round tie.
Lewis' 6-2 third round win over Jonny Clayton saw him secure a spot in a fourth European Tour quarter-final of the year, while Aspinall's narrow 6-5 win over Ricky Evans moved him into the last eight for the third time on the 2019 European Tour.

The 2019 European Tour will conclude with the Gibraltar Darts Trophy from September 27-29 at the Victoria Stadium.