Raymond van Barneveld's final competitive tournament in Holland began in style as he beat fellow countryman Jermaine Wattimena 6-4 with an average of 101.7 on day two of the Jack's Casino World Series of Darts Finals.
The five-time World Champion is aiming to sign off his career in style before retiring at the end of year by winning his first televised title since the 2014 Premier League. 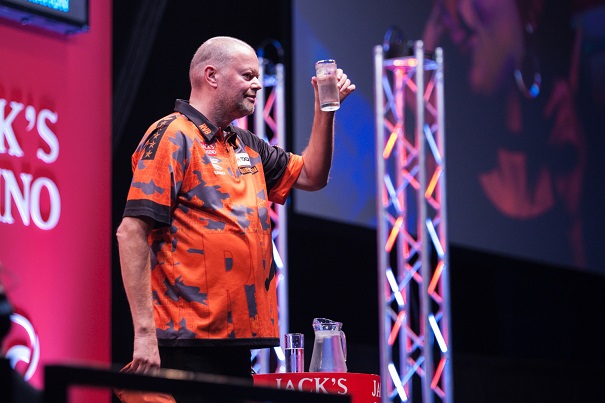 The packed out crowd at the AFAS Live, Amsterdam gave their idol a hero's welcome and the 52-year-old repaid them with one of his best televised performances of the year. An average of almost 102 and 60% success rate on double attempts show signs that Van Barneveld is not ready to retire from the game without one last push for a title.

"I feel so relaxed, the crowd were incredible. Can I win tomorrow? I believe so but we will have to wait and see. "That was a good performance but it's tough to play against Jermaine because we both want to do well for Holland. "I just want to say thank you to everyone for all of their support and I'm looking forward to playing again for them."

Van Barneveld will face Dave Chisnall in the last eight after the Grand Prix runner-up beat European and World Matchplay champion Rob Cross 6-4 in the final game of the evening. 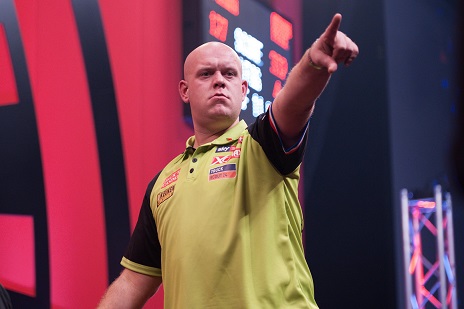 Michael van Gerwen needed a last leg decider to delight the Dutch crowd and defeat Gerwyn Price 6-5.
The match began with Price starting the brighter of the two, breaking throw early to take a 3-1 lead. The Welshman managed to keep his opponent at arms' length until Van Gerwen broke back to level at 4-4. A 127 finish gave Van Gerwen the lead for the first time since the first leg but an equally impressive 129 checkout from Price sent the game in to a decider. A 74 finish sealed the win for the World Champion, who was pleased with his performance.

"That was a good game but I am pleased with how I played. I did the right things at the right moments so I am happy," said the 30-year-old. "Gerwyn is playing well at the moment but I don't care about that as long as I am still the best. "The crowd were amazing and there might not be as many people as in Rotterdam but they are just as loud, I'm really pleased to win for them."

The world number one will now face Jonny Clayton after he dumped defending champion James Wade out of the competition in a dramatic encounter that needed a deciding leg to separate the pair.
The Welshman had also beaten Wade a week before at the European Championship in a 6-0 success but this match was a lot closer with the deciding 11th leg the only thing between them. Wade looked most likely to progress to the last eight but squandered leads of 3-1 and 5-3 before Clayton would go on to pin double 16 for the win. "My confidence is coming back and I'm winning tight matches which I wasn't doing before," said Clayton. "I had to work hard tonight and stick in there because James was playing well, so I'm happy to get the win." 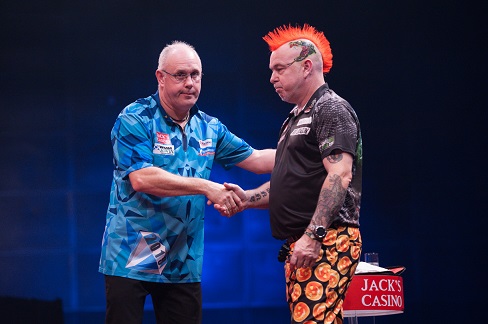 Ian White beat number two seed Peter Wright in a one sided 6-2 win. The Englishman, who is still looking for his first televised title dominated throughout and believes this could be the event that helps take him to the next level.

"I'm really enjoying myself at the moment and know I'm getting closer. "I've got the best job in the world and I'm loving every minute of it, so why can't I win this tomorrow?"

Danny Noppert will be White's opponent in the last eight as he made his first televised quarter-final in almost a year, beating and out of sorts Gary Anderson 6-1. The Scot averaged just 71 and was punished in style by his Dutch opposition who dominated throughout the match.

Mensur Suljovic booked his place in the quarter-finals in Amsterdam with a 6-3 win over Brisbane Darts Masters champion Damon Heta. The Austrian averaged just 89.64 but was far more clinical than his opponent and knows he will need to improve if he is to have a chance of lifting the title on Sunday. 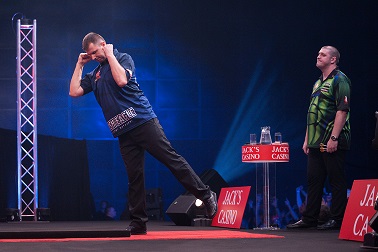 "Today was another tough game, it was hard but I win and that is important. "My focus is now on my match tomorrow not on winning the trophy. I always have to focus on my next match and not anything else." concluded Suljovic after his victory.

Suljovic will now face Krzysztof Ratajski after the 42-year-old upset the odds to defeat world number five Daryl Gurney 6-4 and progress in to the last eight of a televised PDC tournament for the first time.
"I have won on the European Tour now where you have to play three important matches in one day, so maybe this will help me tomorrow, I hope so."