SMITH HITS BACK AGAINST SHERROCK ON OPENING NIGHT IN SALZBURG

The Canadian number one looked set to become Sherrock's latest big-stage scalp after the "Queen of the Palace" raced into a 5-1 lead in their first round tie in Salzburg. However, four missed match darts across two legs eventually cost Sherrock as Smith took five straight legs, including a 109 checkout to win the deciding leg of a thrilling contest. 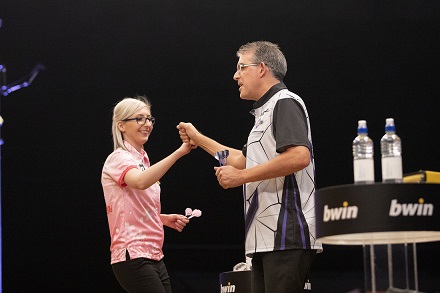 "I feel like I should have lost that game, but I'm still here," said Smith. "To be honest I was the second best player in the match. "I got in the way of myself a little bit. I had a bad Autumn Series and my confidence was low, but I'll take the win. Hopefully tomorrow I'll be better again. "Fallon came at me hard and I was looking to respond. She was the one that let me off in that match and she's a credit to the game."

Smith capitalised on a slow start from his opponent to win the opening leg, but Sherrock levelled with a 12-darter and also landed an 11-dart leg in moving 4-1 up. The Canadian missed the bull in leg six as Sherrock stepped in on double 16 to move to the brink of victory at 5-1, although Smith edged the next and survived a missed match dart - at double 18 - to pull back to 5-3. Sherrock then saw three further match darts go begging, at double 12, six and three, in leg nine as Smith took a reprieve on double eight before pinning double two to send the tie into a deciding leg. Smith was first to a finish in the decider, and with Sherrock waiting on 76 he held his nerve to post double 16 on a 109 checkout as he snatched a dramatic win.

Smith now plays 2018 champion Wade in round two, and added: "James is a fantastic player, probably one of the best players not to win the World Championship. "We have a very similar game, we're both dangerous on doubles and I expect a good, tight, close match but if I get stuck in there I can have a go at him."

The PDC's first event with a crowd since mid-March saw around 1,000 fans at the Salzburgarena for the first of three days of action in the event featuring 24 players from across the globe.

2019 Brisbane Darts Masters winner Damon Heta survived two missed match darts from Ian White before claiming a dramatic 6-5 comeback win from their tight tussle to set up a meeting with World Champion Peter Wright on Saturday.
The Australian hit back from 3-1 and 4-2 down to level after eight legs, but four missed doubles to move ahead in the ninth allowed White to step in on tops for a 5-4 lead. Two missed match darts from White, at double eight, were punished by a 108 checkout from Heta as he forced a deciding leg, in which he landed a 180 and finished tops for a 14-darter to complete the fightback. Heta had won a Players Championship in Germany earlier this week, and admitted: "I have had a good week. I really enjoy the stage but tonight was a different feeling and maybe I did put pressure on myself. "I know Ian and he's a much better player than that, but I'm happy to take the win. I needed the 108 finish and it put me in good stead going into the last leg. "Hopefully I'll relax against Peter Wright and I can go in with a different frame of mind. He's smacked me before in New Zealand but I'm going to bring my A-game and we'll see what will happen. "I've just got to take every game as it comes but I'm buzzing and I want to keep doing better." 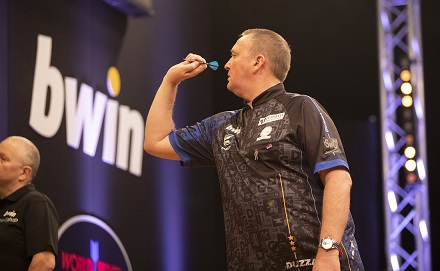 Glen Durrant set up a tasty second round tie with Michael van Gerwen by seeing off Dimitri Van den Bergh 6-3 to go some way to avenging his World Matchplay semi-final loss to the Belgian.
Although Durrant took the opener, Van den Bergh landed an 11-darter to level and moved into a 3-2 lead, but the Premier League table-topper dominated the second half of the game with four straight legs, all of 15 darts or less, to progress.

"That's a good win," said Durrant. "It's no consolation for the World Matchplay, that game broke my heart, but I'm pleased with that win. "I knew what the carrot was tomorrow, MvG, and it's a huge game. He's the best player in the world and it's the biggest challenge as a darts player. "He's got to play well to beat me tomorrow night. I'm up for this. I feel good, I feel strong and I've love to win this tournament."

Krzysztof Ratajski ended home hopes in the tournament with a 6-3 comeback win over Mensur Suljovic, reeling off five straight legs as he moves through to play Michael Smith.
Suljovic produced some sensational darts to open up a 3-1 lead, beginning the game with a 121 finish and adding legs of 14 and 11 darts. Ratajski had landed a 144 checkout just to get off the mark, and finished 141 in leg five to respond before punishing missed doubles from Suljovic in three of the next four to silence the Austrian crowd.

"I'm very happy," said Ratajski, who averaged almost 100. "I never give up and I always fight, so I feel great, like always when I win a match. "Here it was very important because it's a major tournament and I took small revenge because I lost to him in this tournament last year. "Of course, the crowd was with Mensur but after such a big break it's something special to have a crowd."

New Zealand's Cody Harris made his return to action with a 6-2 win over Dave Chisnall, punishing eight missed doubles to set up a second round tie with Daryl Gurney.
Chisnall hit back from two legs down to level after four, landing a 119 bull checkout in the process, but paid heavily for five missed doubles in the next as Harris regained the edge before reeling off the next four for victory.

"Taking that win is a big step," admitted Harris, who was playing his first competitive game since March's UK Open. "We all know what Chizzy's capable of and on his day it could have gone the other way. "I've beaten him twice now but I wouldn't say that I've played his A-game yet. I just want to keep playing - I've been really hungry to play darts all year and I just wanted to get back up there." 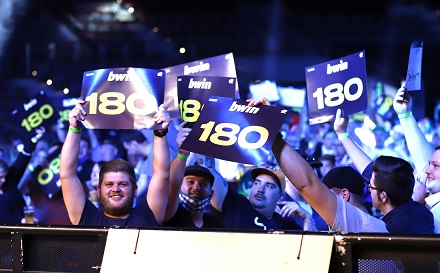 Vincent van der Voort whitewashed fellow qualifier Joe Cullen 6-0 to set up a second round meeting with Gerwyn Price on Saturday in ruthless fashion.
The Dutchman opened with a 13-darter and punished missed doubles from his opponent in the next three legs to move 4-0 up, before legs of 13 and 14 darts completed a dominant display.

"Joe was really struggling and you have to take advantage," said Van der Voort. "The game is brutal and I've done that. "As long as I'm playing well I know that I can do damage to any player in the world. It's all about me. I'm playing better than I have for a long time but I have to prepare myself."
The popular Dutchman added: "To play in front of a crowd makes you feel really good. People love coming to darts and I think people are blessed to be here."

Darius Labanauskas won the tournament's opening fixture with a 6-2 defeat of Harry Ward, who took the game's opening leg before four in a row moved the Lithuanian - who landed a 120 finish in the process - into the ascendancy.
Ward hit back in leg six, but Labanauskas responded with an 11-darter before closing out victory with a 91 average to progress to a tie with Nathan Aspinall.
Labanauskas was a World Championship quarter-finalist in December, and admitted: "After Ally Pally I haven't had a lot of tournaments on the stage but I'm feeling good. I was comfortable tonight."

Veteran star Steve Beaton, one of last weekend's four qualifiers, ended the hopes of Australian ace Simon Whitlock in a thriller to end the opening night.
Whitlock's early 120 finish to lead 2-0 was cancelled out by a 104 checkout from Beaton as the 56-year-old moved into a 4-3 lead, and he repeated that combination to move to the brink of victory at 5-4. Whitlock then took out 108 to save the match in leg ten, but missed the bull for victory in the deciding leg as Beaton returned on double 12 to move through to a tie against Rob Cross.

"I'm looking forward to playing Rob because the biggest hurdle was the first round," said Beaton. "I can relax now and play my game. "It's funny to be back in front of a crowd and it will be great tomorrow."

Saturday's second round sees the eight seeded players, led by reigning champion Van Gerwen and World Champion Wright, enter the tournament as they bid to claim spots in Sunday's final day of action.