The 2021 Cazoo European Championship gets underway on Thursday in Salzburg with 32 of the world's stars in action across four days.
Peter Wright will be defending the title he won for the first time in Oberhausen in 2020, with former champions Michael van Gerwen, James Wade, Rob Cross and Simon Whitlock also among the 32-player field.
The tournament's 14th staging will see the top 32 players from the 2021 European Tour Order of Merit in action across six sessions from October 14-17 at the Salzburgarena, with 500,000 pound in prize money up for grabs. 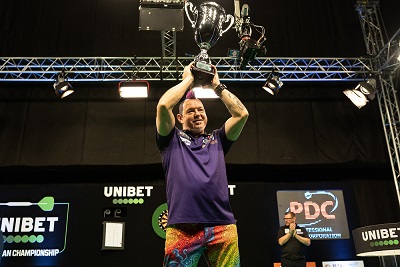 The first round sees 16 matches take place across the opening two sessions on Thursday and Friday, as Wright begins the defence of the title he won with an 11-4 defeat of Wade in last year's final. The Scot's opening assignment will see him face rising German star Florian Hempel, with Wright looking to bounce back from a first round exit to Cross at the World Grand Prix last week.
"Obviously it was disappointing to lose in the first round last week," Wright admitted. "But fair play to Rob, he played great to beat me. "But that's gone now and I'm glad we have a short turnaround to the European Championship. "Last year this tournament was great for me personally, I averaged well over 100 in all of my games so it will go down as one of my best tournament performances. "It would be great if I could retain my title, but I know I've got a tough first round draw against Florian, who will be looking to show what he can do on the big stage."

Thursday's opening night will begin with 2012 champion Simon Whitlock in action against Scotland's William Borland, while 2019 winner Cross takes on Irish teenage debutant Keane Barry. Jose de Sousa, who hit a nine-darter in last year's tournament, will take on Welsh youngster Lewis Williams, while Luke Humphries and Callan Rydz meet in a contest between two of the sport's rising stars.

Friday's second night will see a further eight round one matches take place, with top seed Price, a winner of both this year's European Tour events in Hungary and Gibraltar, up against Ritchie Edhouse. Four-time winner Van Gerwen will face Croatia's Boris Krcmar, 2018 champion James Wade meets Adam Smith-Neale, and Hungarian Darts Trophy runner-up Michael Smith will face Ryan Searle in a repeat of their meeting at July's World Matchplay.

The tournament will then continue with the second round across two sessions on Saturday October 16, ahead of Sunday's decisive final stages.