Michael van Gerwen laid down a marker on the opening day of the 2021 Cazoo Grand Slam of Darts, while Peter Wright, Gerwyn Price and Jonny Clayton all enjoyed victories on Saturday in Wolverhampton.

Van Gerwen put on a show as he defeated Lisa Ashton 5-0 in his first round robin game. The three-time World Champion averaged just under 106 in a dazzling display, in which he didn't allow Ashton a dart at a double. The Dutchman continued his recent upturn in form, breezing through his opener in just eight-and-a-half minutes to begin his bid for a first televised ranking title of the year with a convincing success over four-time Women's World Champion Ashton. 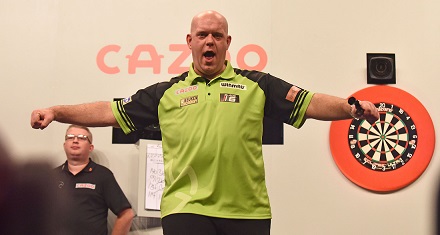 "I'm not coming back, I am back," said Van Gerwen, a three-time Grand Slam winner. "I've been playing well recently. I'm happy, I'm concentrated and I'm feeling good. The first game is always difficult. Lisa is a credit to women's sport and I had to stay focussed but I did the job."

Van Gerwen will meet Joe Cullen on Sunday after the Yorkshireman also claimed a whitewash win in Group G. Cullen defeated Scottish World Cup winner John Henderson 5-0 to get off to a perfect start. 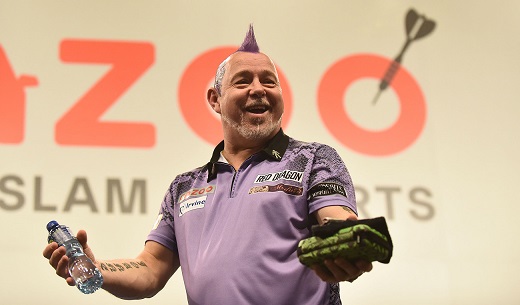 Wright completed a convincing victory over Fallon Sherrock, whose first appearance at the Grand Slam ended in a 5-1 defeat. Nordic Darts Masters runner-up Sherrock, who famously became the first woman to win at the World Championship two years ago, was punished for three missed darts to break in the fifth leg as Wright got his campaign off to a winning start.

"I was happy with how I played in patches," said Wright, the world number two. "It was always going to be difficult playing Fallon, she's an awesome darts player but she let me off a little bit tonight by missing doubles. "I feel really good at the moment. A couple of players have said they are going to win this tournament but I'm going to win it - and I'll back it up like I did at the Matchplay." 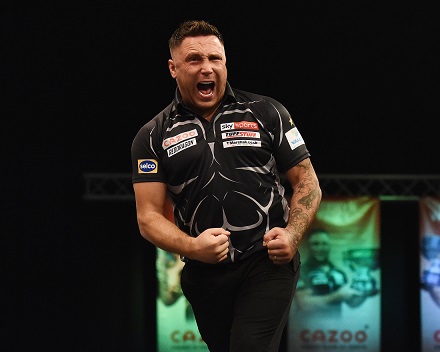 World number one Price was pushed all the way to a last-leg decider by 21-year-old Northern Irishman Nathan Rafferty, who missed a dart at the bullseye to topple the two-time Grand Slam champion on his debut. Price had bust a 100 checkout in the eighth leg, allowing Rafferty to level, but the Welshman held his nerve in the decider to pin double five and take the points.

"I missed a lot of opportunities and wasn't at my best but a win is a win," said Price, the 2018 and 2019 champion at the Aldersley Leisure Village. "Nathan played well in patches and so did I. I've never failed to win this tournament in this venue and I am going to win it again."

Price will take on Krzysztof Ratajski in his second round robin match on Sunday after the Polish ace eased past Germany's Martin Schindler in the Group A curtain-raiser, prevailing 5-1.

Clayton continued his excellent form in 2021 with a 5-3 victory against Austrian youngster Rusty-Jake Rodriguez. The Welshman, who has won the last two televised PDC tournaments, averaged 101.5 in a strong opening display. Clayton, who has picked up four TV titles in total this year, broke his opponent in the first leg and went on to triumph despite a decent debut performance from the 20-year-old.

"I broke him early and that's what changed the game," said Clayton, who will meet the other Group B winner Bradley Brooks on Sunday. "I am just a darts player who is trying to do my job but things are going well, I'm feeling good and hoping to get another ranking title under my belt." 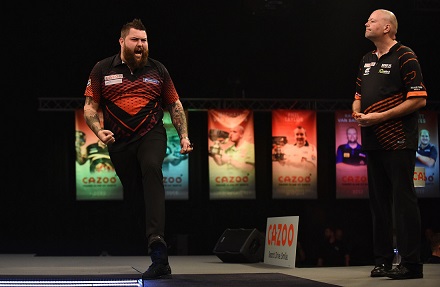 Brooks enjoyed a 5-1 success over the experienced Mervyn King to join Clayton on two points. The PDC Unicorn World Youth Champion took full advantage of an out-of-sorts display from King to clinch victory on his Grand Slam debut.

Michael Smith came out on top in what was arguably the most entertaining match of the day when he beat Raymond van Barneveld in a last-leg decider. 2012 Grand Slam winner van Barneveld marked his return to the tournament after coming out of retirement with a brilliant 122 checkout on the bullseye. But it was Smith who went on to win a see-saw encounter by breaking in the last leg, which he almost won with a 170 checkout before cleaning up the remaining 25. 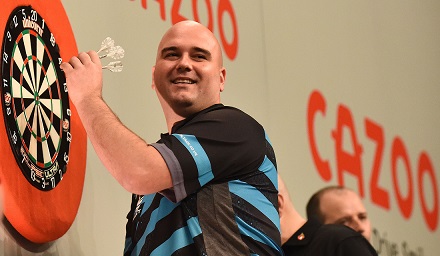 European Champion Rob Cross triumphed 5-0 over Croatia's Boris Krcmar, who missed nine darts at doubles in his first appearance on the Wolverhampton stage. Cross will face Jim Williams on Sunday after the UK Challenge Tour Order of Merit winner made it three wins from three for Welshmen when he defeated three-time Grand Slam finalist James Wade 5-4.

Jose de Sousa began his Grand Slam title defence with a comfortable defeat of Canada's Matt Campbell. The 2020 winner hit five out of six double attempts, including to complete a 101 checkout, as he claimed a 5-1 success. 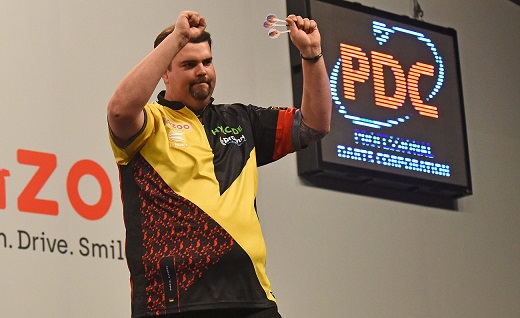 Gabriel Clemens also won 5-1 as the German star got the better of Belgian talent Mike De Decker. The standout moment in the tie came in the fifth leg, in which De Decker threw seven perfect darts - only to lose it when his opponent finished 100 with two double tops.

Mensur Suljovic emerged victorious from a brilliant battle against Luke Humphries. The Austrian ace won 5-3 in match that saw both players average over 100, with a break of throw in the seventh leg ultimately proving decisive.

Ryan Joyce defied a 106.7 average from Stephen Bunting to claim the opening match of this year's event 5-4. Bunting missed double top for a 148 checkout in the deciding leg before his opponent cleaned up 68 to win a game in which every leg went with the throw. 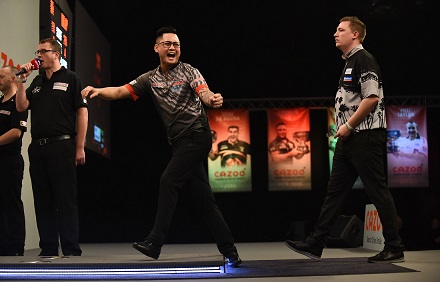 Former World Youth Championship finalist Rowby-John Rodriguez earned an impressive 5-3 success against Chris Dobey, who was a late replacement for Dimitri Van den Bergh.
Gary Anderson got his bid for a first Grand Slam title underway with a routine victory against a struggling Joe Davis, who was hampered by an elbow injury in a 5-1 defeat on his debut in the tournament.

The action continues on Sunday with two sessions which will see all of Saturday's winning players go head-to-head and all of the losing players in each group battle it out for their first points of the tournament.