Fallon Sherrock completed a sensational comeback victory with an incredible 170 checkout to become the first female player to reach the knockout stages of the Cazoo Grand Slam of Darts.
Sherrock made history yet again as she won the last four legs of her crucial match with Germany's Gabriel Clemens to earn the 5-3 win she needed to progress in Wolverhampton on Tuesday. 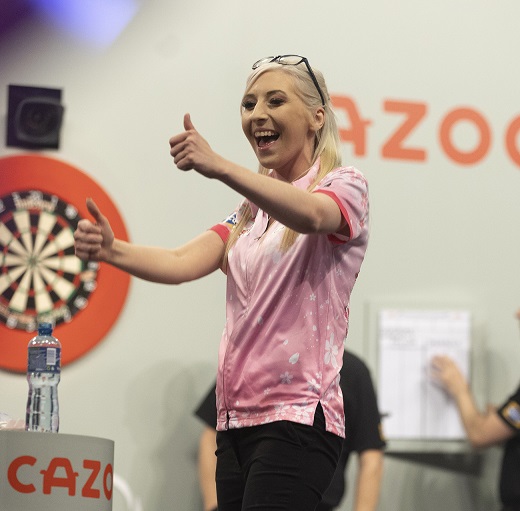 In one of the most dramatic and memorable matches in the tournament's 15-year history, Sherrock - the first woman to win at the PDC World Championship - added a further chapter to her remarkable story with another momentous triumph. The recent Nordic Darts Masters finalist went into her last Group E game knowing she must win by a margin of two legs or more, but it became an uphill task when she was punished for busting 60 by hitting the treble 20 as Clemens broke her throw in the opening leg. He went on to win two of the following three legs, leaving himself in need of just one more to qualify but Sherrock refused to be denied and roared back with a 12-darter before a sublime 141 finish restored parity. The Women's Series Order of Merit winner then hit double top to hit the front and sealed the win in astonishing style, landing an exquisite 170 checkout to send the Aldersley Leisure Village crowd into a frenzy. 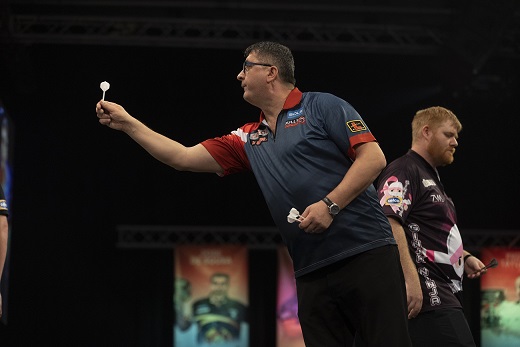 "I don't even know how I did that," said Sherrock, who set up a meeting with one of the men she defeated at Alexandra Palace in 2019, Mensur Suljovic, in round two. "When I approached the 170 I knew that was my only chance and that I had to take it. I'm so proud of myself for doing it as it shows what I can do and gives me a lot of confidence. "I'm really looking forward to playing Mensur again and I'm excited to see how much further I can go."

Suljovic had stormed to victory earlier in the evening against Canada's Matt Campbell to progress, winning five legs without missing a dart at a double. The Austrian star averaged just below 106, hit four 180s and produced combination checkouts of 50, 70, 76, 87 and a match-winning 90 in a ruthless demolition of his opponent. 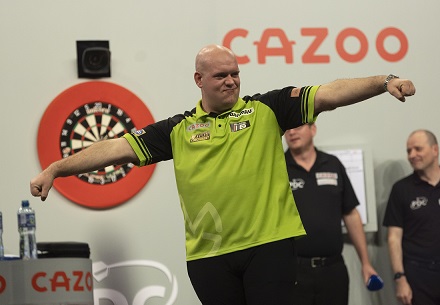 Michael van Gerwen confirmed his place in the last 16 with a comfortable victory against World Cup winner John Henderson. Three-time Grand Slam champion Van Gerwen sealed a 5-1 win over the Scotsman with a showpiece 125 checkout, setting up a mouth-watering last 16 showdown with Gary Anderson. The Dutchman didn't quite reach the level he had produced in previous games, having recorded the highest ever average at the Grand Slam earlier in the week, but eased to glory with the aid of four 180s.

"I thought I did quite well - especially hitting the 125 at the end," said Van Gerwen, who won all three of his group games. "I didn't play as well as I did at the weekend but I knew I was going through and maybe was a little too relaxed. "I feel good and I am playing good darts. Everybody knows that if I play my best game I will beat them and I'm looking forward to the next match." 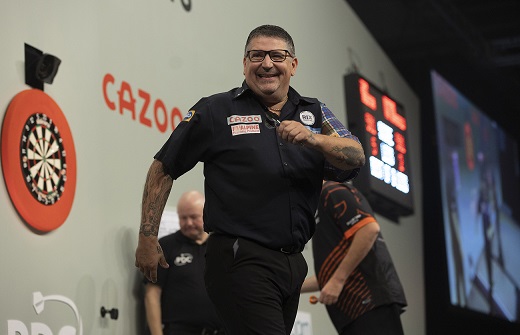 Anderson maintained his staggering record of qualifying for the knockout phase in all 15 stagings of the Grand Slam as he turned on the style to win a straight shoot-out against Raymond van Barneveld. Anderson averaged 103.88 in an excellent 5-2 defeat of 2012 champion Van Barneveld, who was eliminated on his return to Wolverhampton.

"It's been a long run and it's a record I'm happy with," said Anderson. "I played proper darts tonight. I had to beat Raymond and I showed that I can still do it from time to time so we'll see how it goes when I play Michael." 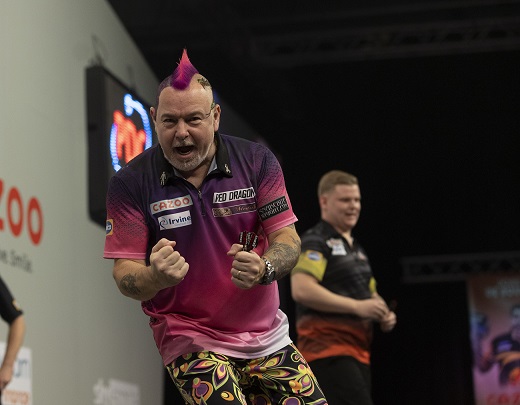 World number two Peter Wright cruised to a whitewash victory over Belgium's Mike De Decker to earn a spot in the second round. Former World Champion Wright was far from his best but was still too good for De Decker, who only got two darts at doubles in a second successive 5-0 defeat - having lost by the same scoreline to Sherrock on Sunday.

Defending champion Jose de Sousa advanced despite losing to Luke Humphries. The Portuguese ace got the three legs he needed to progress from Group F at the expense of his opponent. Former World Youth Champion Humphries had needed a victory of 5-2 or better but let a 4-1 lead slip before eventually winning 5-3 in vain. 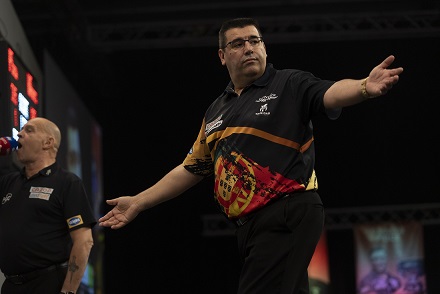 Michael Smith sealed top spot in Group H as he made it three wins from three matches with a 5-3 success over Joe Davis in the opening match of the evening. 2020 World Youth Championship runner-up Davis, who has been struggling with an elbow injury, battled hard through the pain barrier but was unable to pick up a victory on his Grand Slam debut.

Smith will meet Joe Cullen in the last 16 after the Yorkshireman moved into the knockout phase for the first time following a 5-2 defeat of Lisa Ashton, who was eliminated. After winning the opening leg, a 64 checkout saw Ashton level at two apiece - only to see Cullen reply in kind to move in front. He then didn't look back, taking out 76 in the following leg before sealing a second round robin victory on double 16.

The 550,000 pound tournament continues on Wednesday, as the knock-out phase gets underway on Wednesday with four best of 19 leg battles.
World number one Gerwyn Price will take on World Youth Champion Bradley Brooks and Jonny Clayton will clash with young prospect Nathan Rafferty.