Gerwyn Price and James Wade will clash in the Cazoo Grand Slam of Darts semi-finals after enjoying hard-fought victories over Jonny Clayton and Rob Cross on Friday.

World Champion Price remains on course to win his third Grand Slam title at the Aldersley Leisure Village following his battling 16-12 win over in-form Clayton. Wade, meanwhile, is aiming to reach his fourth Grand Slam final after edging out Cross 16-14 in another tight contest. 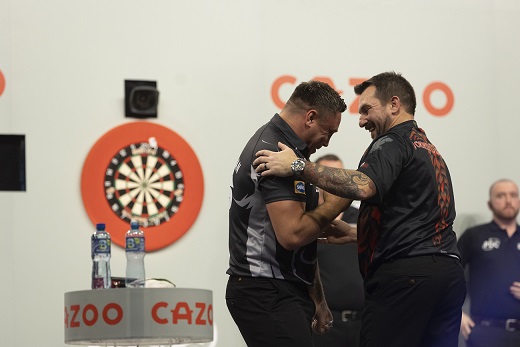 The pair have never previously been defeated at the semi-final stage in the event, and will now open up Sunday's semi-finals in an eagerly-awaited tie. Price avenged last month's loss to Clayton in the World Grand Prix final with a strong performance as he held off his Welsh World Cup team-mate's fightback.

"I got over the winning line in the end and I'm pleased to be in the next round because that was a tough one to get through," said Price. "I should have blown him away early on but I'm letting people off the hook. I need to be playing a lot more and I haven't this year. "It was close, it was intense and I was fortunate that Jonny slipped up a couple of times and I did what I had to do. "I flew out of the blocks but when it was 6-4 I should maybe have been 8-2 up, Jonny shouldn't have been in the game but I'm letting people off. "When my back was up against the wall, I didn't want to let him get in front of me. I wasn't at my best, but it was an exciting game, a close game and good for the crowd and people back home."

Price opened the game with a 13-darter, and followed a 100 checkout with a ten-dart leg and an 11-darter as he stormed into a 5-1 advantage. Clayton, though, ignited his challenge with a 126 finish and produced legs of 11, 14 and 13 darts in hitting back to level at six-all. Price took out 110 to regain the edge and pulled away to lead 11-8, only to see Clayton respond once more as he squared the tie after 24 legs. The world number one held throw to lead 13-12, and punished Clayton's miss at tops in the next to break, before finishing 66 and tops to secure his semi-final spot. 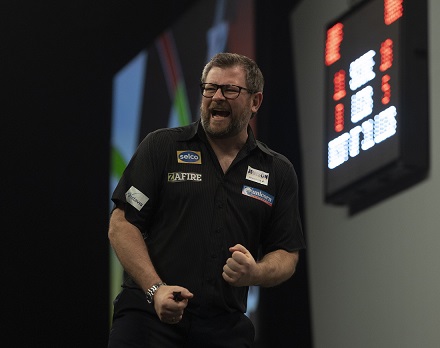 Wade won through to his fourth Grand Slam of Darts semi-final by defeating Cross 16-14 in a tight clash to open Friday's quarter-finals in Wolverhampton. The three-time runner-up also had to overcome a mid-game change of darts, after a point snapped in the board, to continue his quest for a maiden Grand Slam triumph. The UK Open champion will now compete in Sunday's final stages as he targets the Eric Bristow Trophy after condemning Cross to his second quarter-final exit in the event.

"It's a gift to be in the semi-finals," said Wade. "It was a struggle but I did enough at the right times. "Rob wasn't at his best and I took advantage of that. I've got mixed emotions - it was messy but I'm happy to move forwards."

Cross held the better of the early exchanges - including completing a 13-darter despite two 180s from Wade, who replied with a 150 checkout - as he held a slender 5-4 cushion. The left-hander, though, produced a superb five-leg burst to turn the match as he broke Cross' throw three times to surge into a 9-5 advantage. The next nine legs went with throw before Cross fired in a 13-darter to break and then held with a 70 finish as he pulled back to 13-12. Wade responded in outstanding fashion with a 148 checkout to give himself breathing space, and traded 13-darters with Cross before closing out victory on double six. 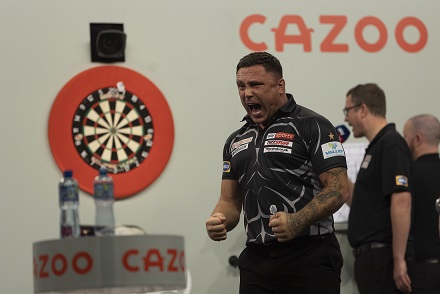 Price believes he will need to be "sharper" if he is to end Wade's hopes in Sunday's last four clash.
"I need to improve if I want to win this tournament because I won't get away with what I did today against James," he added. "I want to go on and win this tournament, it's one of my favourite tournaments. Now I'm in the semi-finals hopefully I can start playing well and blow people away. "I need to fly out of the blocks and put James under pressure, because if you give him shots he'll ping them out. "I need to take my opportunities, put him under pressure and hopefully get a good lead on him. I'm full of confidence."