Gerwyn Price claimed his third title in the Cazoo Grand Slam of Darts with an imperious 16-8 victory over Peter Wright, continuing his dominance of the event at Wolverhampton's Aldersley Leisure Village. 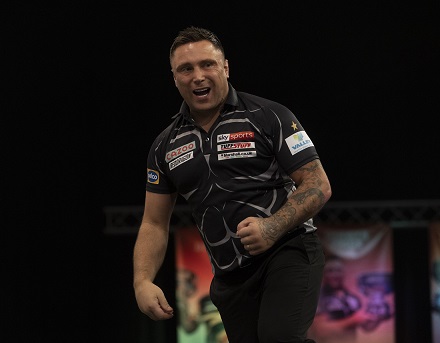 The Welshman had won his maiden televised title in the 2018 Grand Slam and defeated Wright in style to retain the Eric Bristow Trophy 12 months later.
He repeated that success by seeing off Wright once again in Sunday's final to scoop the 125,000 pound top prize - plus a 3,500 pound Group Winner bonus - following a sensational display.

Price was in dominant form during his semi-final win over James Wade on Sunday afternoon, finishing 64 percent of his darts at a double and averaging almost 103 in a 16-9 success. He continued that with a sensational performance in the final, leading throughout the tie before pinning double 12 to complete his hat-trick of Grand Slam successes.

"I'm thrilled to win this again," said Price, who averaged 103.90 in the final. "It's tough to win against the best players in the world, but it's a big pat on my back and I'm chuffed. "Early on in the final I thought I put Peter under a lot of pressure. I carried on with my own game and I was clinical today. "I blew him away in the middle part of the game. Towards the end, I'm not sure why the doubles weren't going in and then Peter hit the 155! "I was way more consistent than him and put him under pressure on his throw. I'm playing well and I know there's a lot more in the tank." 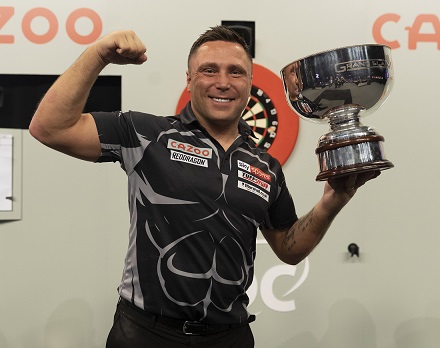 Price opened the final with a 140 checkout in leg one and won four of the first five legs without missing a dart at a double. Wright pulled back to 4-3, but crucially missed one dart at double 16 to level in the eighth leg, allowing Price to finish double 12 and regain breathing space. Price took the next five legs to pull away from Wright, landing a ten-darter in the process of creating a 10-3 cushion in a run which also included two 13-dart finishes. Wright - who had come from 12-8 down to win his semi-final with Michael Smith 16-12 earlier in the day - fired in a ten-darter of his own in reducing the gap to 12-6. Price took the next three in 13, 14 and 13 darts as he moved to the brink of glory, with missed championship darts allowing Wright to finish 86 and 155 to keep his hopes alive before the Welshman finished double 12 to finally close out the triumph.

Price had seen Jose de Sousa claim Grand Slam glory 12 months ago when the tournament was held behind closed doors in Coventry, but added: "It's nice that crowds are back.
"We've played here three times and I've won three times - I'm disappointed that we didn't play here last year! "It's good playing in this venue, I've never lost this tournament here so hopefully that continues over the coming years." 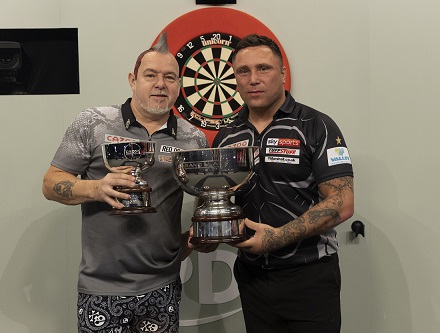 The defeat was Wright's third in a Grand Slam final in a six-year period, as his quest to claim the Eric Bristow Trophy continues. The world number two had produced a stunning semi-final comeback against Smith, landing 15 180s and trading 170 checkouts with his opponent during a thrilling tie.

"I got to the final and played some nice darts on the way through, and I've got no excuses, I didn't push Gezzy," said Wright. "He's the number one in the world, the World Champion and he's hard work to beat here. I didn't turn up for the final and I'm disappointed. "Obviously I've been going through a slump with my darts but I'll take positives from this week. I haven't lost anything on the rankings, and I haven't got to qualify for next year's Grand Slam!"

Smith's defeat was his second in the Grand Slam of Darts semi-finals, while three-time finalist Wade fell one match short of reaching the decider for a second successive year.