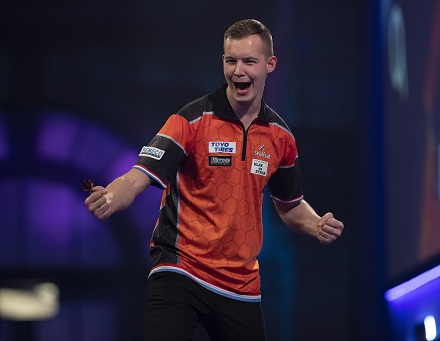 The runner-up to Geert De Vos in Niedernhausen on Sunday, Dutch youngster Nentjes won back his Tour Card as he showed fighting spirit with five 6-5 victories from seven games in Monday's European Qualifying School action. The 22-year-old battled back from behind against Franz Roetzsch, Patrick Tringler and Michael Unterbuchner, and overcame five-time World Champion Van Barneveld in 11 legs in the semi-finals. Nentjes' final also went all the way as Russia's Boris Koltsov hit back from 4-2 down to level and then force a decider, only to miss his chance to take victory as the left-hander prevailed.

"It's a big relief, I'm very happy," said Nentjes. "Yesterday losing the final, I was a bit nervous today coming in [knowing that I] need a few points more so I'm happy to win it straight back."
Looking back on his semi-final win over Dutch icon Van Barneveld, he added: "I was playing him and thinking that I want to beat him now so that when I play him on the ProTour I know can beat him, so it's a bonus for me to win against him."
A two-time PDC Unicorn Development Tour event winner in 2019, Nentjes had lost his Tour Card at the end of last year but will make an immediate return to the circuit. 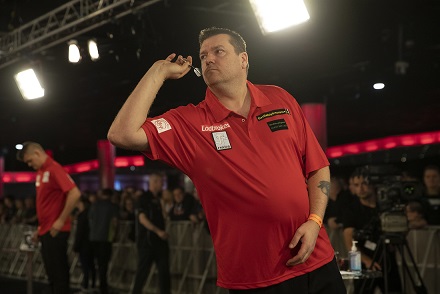 Berkshire's Heaver, meanwhile, will compete on the PDC ProTour for the first time after he came through the field in the UK Qualifying School to win a Tour Card on Day Two. A production planner who has previously qualified twice for the UK Open as an amateur, Heaver hit back from 3-1 and 4-2 down in his final against Alan Soutar to win four straight legs in a 6-4 triumph. Heaver edged out Lewis Williams 6-5 in their last four clash, averaged 100 in a win over Martin Lukeman and also defeated former Tour Card Holders Andrew Gilding and David Pallett on the day.

Monday's action also featured a nine-dart finish from Shane McGuirk, who achieved perfection to seal his 6-2 win over Lewis Pride in the last 64 at the UK Qualifying School.
Scotland's Soutar now sits at the top of the UK Qualifying School Final Stage Order of Merit on seven points following two of the four days of action, putting himself in pole position to win a Tour Card on Wednesday.
Lukeman sits second with six points alongside Sunday's runner-up Jack Main, with Eddie Lovely and Gavin Carlin on five points.

In Europe, Zoran Lerchbacher tops the Order of Merit with seven points from two days after following Sunday's quarter-final run with a semi-final appearance 24 hours later.
Van Barneveld sits on six points as he bids to mark his comeback by winning a Tour Card, with Koltsov joined on five points by Germany's Martin Schindler, who lost his professional status at the end of 2020.

Play in the 2021 PDC Qualifying Schools Final Stage continues on Tuesday with Day Three, with two further Tour Cards to be won outright.