The Dutchman enjoyed a remarkable rise up the PDC rankings in 2020, including reaching his first televised final at the World Grand Prix, and has continued that form into 2021 as he scooped a maiden ProTour title.
Victory over Kleermaker on Day Three of PDC Super Series 3 means Van Duijvenbode becomes the 85th player in history to win a PDC ranking event. But it wasn't plain sailing for Van Duijvenbode over his compatriot in the final. The 28-year-old started brightly as he clinched the opening two legs, but was pegged back immediately at 2-2 by Kleermaker, including a 109 checkout. Van Duijvenbode immediately re-established a two leg lead at 4-2, with the pair then trading the next four legs before Kleermaker found another break of throw and a show stopping 140 checkout to level at 6-6. Again Van Duijvenbode rallied, and broke back immediately before a nervy final leg saw him clinch the title on D16, with Kleermaker missing five darts to force a decider. 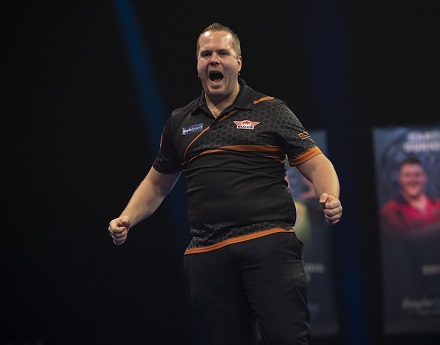 "We were both nervous," said a delighted Van Duijvenbode. "When I thought I could finish it, I was more nervous than him, and then when he needed to stay in it he was more nervous. "I was in great form the last two series and thought I would win a title but I didn't. The last two days I have been poor, so I went into today just hoping I would win the first round. "On the one side I know I need to play better, but on the other it is great to win when not playing your best. "Sometimes you have to win on a bad day, but I always want to play well and that is what I think about - and then it all comes together."

The day started for Van Duijvenbode with a 6-3 victory over David Evans, before he posted his highest average of the day - 105.9 - in a brilliant performance to beat Jelle Klaasen 6-2. Following this were three 6-4 victories over Canada's Jeff Smith, Poland's Krzysztof Ratajski and England's Scott Mitchell as he booked his place in the Semi-Finals. There he met 48-year-old Andy Boulton, where the Dutchman strung together an impressive spell of three-straight legs late on as he edged into the final a 7-5 winner.

Kleermaker, who was also playing in his first PDC ranking final after securing a tour card in 2020, kicked his day off with a 101.6 average in a 6-3 victory over John Henderson. Following this, he posted an impressive 6-5 win over German number one Gabriel Clemens, before seeing off Luc Peter's 6-4 and Sunday's champion Michael Smith 6-3. He then squeezed past Ritchie Edhouse 6-5, before seeing off Brendan Dolan 7-5 in an assured display to set up the title showdown with Van Duijvenbode. 
Elsewhere, it was another disappointing day for Michael van Gerwen as he failed to make it past the Last 64 stage for a third day running. Raymond van Barneveld also withdrew from the tournament on medical grounds and will be replaced in Players Championship 12 by Jeroen Mioch.

The action in Niederhausen concludes on Tuesday with the final day of PDC Super Series 3.