The 10,000 pound title all but confirms Bunting's place in July's Betfred World Matchplay, having started the day outside the provisional qualification places.
Bunting, a 2020/21 World Championship semi-finalist, recorded victories over Gerwyn Price and Raymond van Barneveld on a memorable opening day of PDC Super Series 5 at the Coventry Building Society Arena. The former Lakeside Champion missed double 12 for a nine-dart finish in the final, which Bunting controlled from the fourth leg when he landed a 13-darter for the game's first break of throw. Despite being unable to produce his usual scoring power, Van den Bergh pressured the Bunting throw but was unable to break back as Bunting kept the Belgian at distance throughout the contest with holds of throw. Victory was sealed with a 64 checkout on double top for Bunting, whose previous two ProTour titles came in 2014 and 2016. 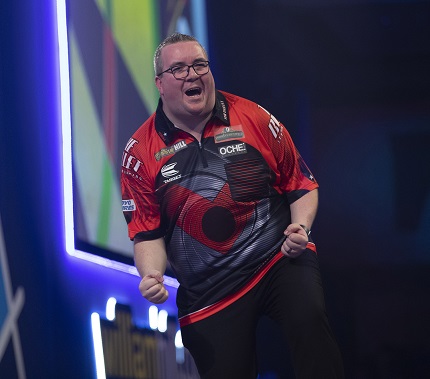 "It's an amazing feeling to be stood here as a winner again," said an elated Bunting. "A lot of people know I was close to packing in a few years ago but since then I've worked so hard behind the scenes, I've put everything into this. "Trying to qualify for the World Matchplay was my priority this week, so to come here and win the title on the first day is beyond my dreams. "I know I'm playing well, but I do honestly believe there is a lot more in the locker and I can relax now knowing I'm going to Blackpool."

Though unable to double his 2021 Players Championship title tally, Van den Bergh's run to the final presents a positive sign for the 26-year-old ahead of the defence of his World Matchplay title later this month. Van den Bergh was statistically the day's top performer, with a tournament average of 103.52 prior to the final, posting averages over 100 in five of his seven matches.

Elsewhere, players continued to vie for position in the race to qualify for July's Betfred World Matchplay as Brendan Dolan and Mervyn King cemented their places in the ProTour Order of Merit qualifying positions with runs to the quarter-finals.
Former Winter Gardens runner-up Raymond van Barneveld, who averaged 115.73 in his round one win over Justin Pipe, also enjoyed a run to the last eight to stay in touch with the chasing pack.