Peter Wright once again made it a winning end to a PDC Super Series as he picked up the Players Championship 23 title in Barnsley, beating Jonny Clayton 8-7 in the final. It's the fourth time this year that the Scotsman has picked up the 10,000 pound prize on the final day of action as ProTour events are played in a mini-series. 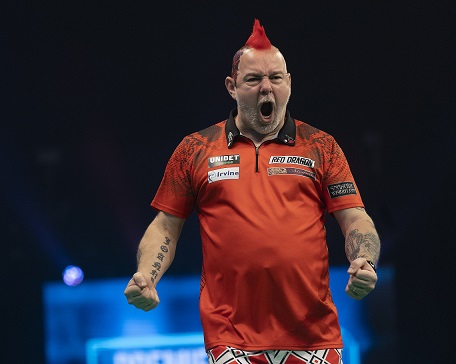 This was arguably one of the toughest for Wright however, as he edged past Clayton in a deciding leg to secure his fifth PDC Title of 2021. Clayton had lost just seven legs ahead of the final, but it was 51-year-old Wright who started much the stronger, racing to a 3-1 lead. 46-year-old Clayton then landed a 180 before the first of two 140 finishes to close the gap to one at 3-2, with the second coming in the eighth leg to level things up at 4-4. Wright once again pressed his advantage, taking the next three legs to move 7-4 ahead and on the brink of the title. Premier League champion Clayton rallied once more and kick started a late comeback with a stunning 167 finish. Despite Wright missing five match darts, two more legs followed for Clayton including a 15-dart break of throw in the penultimate leg to force a decider in which the Welshman had the darts. But recently crowned World Matchplay Champion Wright just proved too strong again, and landed crucial scores of 140 and 180 to stretch well ahead, before sealing the victory on double-twelve.

It marked back-to-back finals for the Scot, who was beaten by Ryan Searle on Tuesday before going one better to secure Players Championship 23.
"I told everybody that I was going to win it today," said Wright. "If I had hit my doubles it would have been a lot more comfortable, and that 167 from him as well as those 140s. "I felt more relaxed yesterday and with a different set of darts, but today will do me good going forward. "I'm now just looking forward to things getting back to normal and us having nothing but darts, darts, darts every weekend."

Wright was in imperious form all day and started with a 6-3 victory over Jack Main He followed this with a 6-4 win over Joe Murnan as he posted his first ton-plus average of the day. Next was a 6-3 victory over Karel Sedlacek, before he repeated the scoreline against Stephen Bunting, averaging 103.93 and 104.31 respectively. Germany's Martin Schindler was his next victim in the Quarter-Finals stage as he succumbed to a 6-3 defeat with Wright once again averaging over the 100 mark. And he then dealt with tricky customer Jamie Hughes in the Semi-Finals, squeezing through 7-5.

For Clayton, it was an arguably even more impressive display in reaching the final. An early 6-1 victory over Glen Durrant was then followed by a whitewash 6-0 victory over Spain's Jose Justicia. The 'Ferret', who has been in superb form in 2021, then saw off Chris Dobey 6-1 before pushing aside William Borland by the same scoreline. Yesterday's champion Searle was next to fall, as Clayton pushed his average to 102.86 in a 6-2 victory. He then comfortably dealt with multiple-major champion James Wade 7-2 to reach the final.

Victory for Wright means he joins Gerwyn Price and Searle on the winners podium for PDC Super Series 6, with all three finals going the full distance of 15 legs. That brings an end to the Players Championship action ahead of the cut off for qualification for October's World Grand Prix.
However, the European Tour returns in September with the PDC's first visit to Budapest with the Hungarian Darts Trophy (September 2-5), before the Gibraltar Darts Trophy on September 24-25.
Players Championship action will then return with PDC Super Series 7 from October 19-22.