Fallon Sherrock booked her Grand Slam of Darts debut by claiming her third Women's Series title of the weekend in Milton Keynes on Sunday. 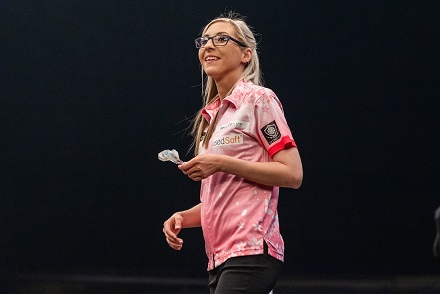 Sherrock defeated Lisa Ashton 5-0 in their third final of the day, a winner-takes-all clash to top the Women's Series Order of Merit after six events. Ashton had won her second and third titles of the weekend in Events Four and Five, but had no answers to Sherrock's 96.35 average in the Event Six decider.
Though both players won three titles each, Sherrock's two runner-up placings to Ashton's one saw her finish higher on the Order of Merit after the opening weekend of action at the Marshall Arena.

"I'm really pleased," said Sherrock. "Getting to the final twice and losing to the same player both times is going to play on your mind a bit, so I'm delighted to get the win. "Lisa didn't play her best in the last final but I'll take the result, I couldn't give her a way into the match. "I don't know where I pulled out that last performance from because I'm shattered after playing so many matches across the two days. I think it's because I feel relaxed. "I'm absolutely buzzing to have secured a place in the Grand Slam, I can't wait to play in that. "But there's six events still left to play in the Women's Series and I need to make sure I finish the job and qualify for Ally Pally."

PDC Tour Card Holder Ashton, the 2020 PDC Women's Series winner, enjoyed an unbeaten run across the opening two events of the day, defeating Sherrock 5-4 and 5-2 in the day's first two title deciders.
Ashton remains well-placed on the Order of Merit heading into events 7-12 in Barnsley next month, with the top player across those six events joining Sherrock in qualifying for the Grand Slam of Darts.

In addition, the top two players from the final Order of Merit, following all 12 events, will qualify for the 2021/22 William Hill World Darts Championship.

Events 7-12 will take place at the Barnsley Metrodome from October 23-24. Coverage will be streamed through PDCTV throughout the three events.